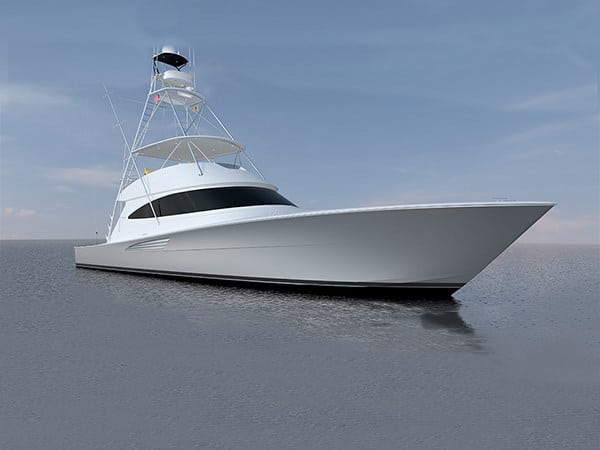 Viking Yachts understands that innovation drives growth and is committed to its mantra to build a better boat every day by investing nearly $50 million in R&D over the last 4 years. As part of this investment, Viking introduced three new models this year, the 37 Billfish, the 44 Open and its flagship, the 93 MY; but never a company to rest on its laurels, the legendary yacht builder will introduce the Viking 68 Convertible in 2018.

The Viking 68 Convertible features some of the attributes of the larger Viking Yachts yet delivers the handling and efficiency of a smaller vessel. Running on Viking’s proven hull shape with a 12.1-degree transom deadrise, the Viking 68 C delivers a soft ride in rough seas, with a 35-knot cruising speed and a top end approaching 40-plus knots. An aggressively raked stem, gently sloped sheer, swept-back black-masked windshield and flying bridge brow present a powerful yet elegant picture.

The 176-square foot cockpit provides plenty of maneuverability for the angler while the air-conditioned observation mezzanine keeps guests comfortable when watching the action below. The Viking 68 Convertible is offered with either an open or enclosed bridge. Using the 19 ft. 2 in. beam to its full potential, the salon is the perfect combination of intelligent form and function. The island galley opens to the salon and serves as a prime area for socializing. The dinette seats four along with three stools mounted at the bar. The boat’s design is perfect for the installation of a Seakeeper gyro stabilizer. Which heightens comfort during both fishing and cruising activities. The 68 Convertible comes with twin 1,945-hp MTU Series 2000 V12 diesels for powerful, efficient and clean-running engines.

As with all Viking yachts, custom electronic packages and tuna towers can be ordered and professionally installed by Atlantic Marine Electronics. Also,  Palm Beach Towers respectively for turn-key delivery and utmost satisfaction and performance. Galati Yacht Sales will take delivery of three Viking 68 Convertibles next Spring.  Two of those boats has already been sold. The other was built to the specifications of the Galati Yacht Sales fishing specialists with input from captains and owners. It is currently available for purchase.