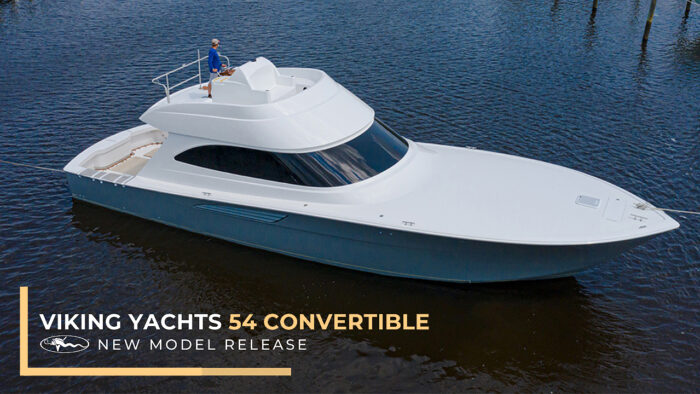 New Jersey Yacht Manufacturer— Viking Yachts Company—reaffirms its domination of the mid-size convertible with the release of the all-new 54 Viking Convertible. Throughout the last two decades, Viking Yachts has dominated the 50-60 foot sportfish range with the introduction of ten models; including the ground-breaking models the 60 and 55, and the two renditions of the 52 Convertible and the first-generation 54. “No one has done a better job in this segment of the market,” says Viking President and CEO Pat Healey. “Over the last 20 years, we’ve designed more boats from 50 to 60 feet than any other manufacturer in the industry. This is absolutely our sweet spot.” The latest sportfish yacht in the production line is scheduled to make its world premiere at the 2020 Fort Lauderdale International Boat Show, October 28- November 1st. The three-stateroom, two-head open bridge sportfish yacht pushes the owner/operator convertible to the uppermost levels of engineering, performance, accommodations, and sportfishing capabilities. With thousands of hours logged by the Viking demo team and plenty of owner feedback, the all-new 54 C is setting new milestones. “We’re in a constant state of refinement,” says Viking Design Manager David Wilson. “Everything from interior and exterior design and accommodations to performance, fishability, and ease of operation are evolving.”

Using Computational Fluid Dynamics (CFD) software, the Viking Design and Engineering team has enhanced the 54’s running surface for peak performance. This software is now an integral part of the design process. It allows them to run numerous virtual sea trials to fine-tune the shape of the hull bottom for increased efficiency. The hull is built with an engineered composite of fiberglass fabrics and coring that’s vacuum-infused with vinylester resin. A new design trait of the 54 Convertible is the 154 square foot unobstructed cockpit. With six inches of additional cockpit space from that of the 52 models, the 54 C comes to the tournament circuit with enough ammunition to put you in the winner’s circle. Features include molded non-skid on the cockpit sole for grippy footing and large scuppers to drain water quickly; a walk-through transom door with a lift gate, taking the work out of boating a trophy catch; Viking’s signature rounded cockpit coamings and toekick come in handy when fighting those lengthy stand-up battles; flush rod holders, recessed stainless-steel hawse pipes and cleats allow for an open and clear cockpit area.

Anglers will appreciate the multiple insulated fish boxes that vary in capacity. Her raised transom box has the flexibility to be used as a livewell, fishbox, or for general storage. Not to mention, a full-length in-deck fishbox spans the starboard side, while the port side holds two storage compartments with the forward serving as an optional live well. Other options include the installation of a fighting chair, rocket launcher, or table.

Control at Your Fingertips | 54 Viking Convertible

At the helm, a streamlined walk-around center console provides 360-degree sights with touchscreen electronics and Optimus Electronic Power Steering at your fingertips. The installation and positioning of the electronics and row of Bocatech switches heighten viewability and ease of access. The console itself is designed with toekick all around for better balance and larger walking area. The helm and companion chair supply ample comfort for extended trips and guests can take it easy in the port or starboard lounges (with forward-facing backrests) or forward console seat.

Making full use of the 17’8” beam, the 54 Convertible’s layout highlights the expansive size of her interior. The key to the configuration is the uninterrupted companionway that stretches from the starboard-side salon door to the forepeak. This in turn adds more depth perception and an overall larger feel to the boat. The lounge area and galley are to port, while the dinette is to starboard. Another design change on the 54 C includes a peninsula galley versus and island galley. The peninsula countertop features engineered stone with an overhang and two convenient bar stools. The galley is feature-packed with a pair of under-counter Sub-Zero refrigerator/freezer units and storage under the peninsula counter.

Below deck, the three-stateroom two-head layout includes a master suite to port with a walk-around queen berth. The forward stateroom also comes standard with a queen berth and is available with a crossover berth arrangement. Lastly, the starboard stateroom features upper and lower berths. Each stateroom is fully carpeted, with dedicated temperature and stereo controls, speakers and overhead LED lighting. Another design modification can be found in the two heads; a newly designed large walk-in one-piece fiberglass showers with an expansive glass enclosure and door. In addition, each head features custom Amtico flooring, a lower vanity, a medicine cabinet with mirrored doors, exhaust fans, air conditioning, and electric heads with holding tank and overboard discharge capabilities.

With the optional MAN V12 1550CRM (1550 MHP) propulsion package, the Viking 54 Convertible will have an estimated cruise speed in the mid-30-knot range with a top end of 40-plus knots depending upon load, sea state, and boat condition. A pair of MAN V12 1400CRM (1440 MHP) diesels come standard. All mechanicals and equipment are installed with great attention to detail in an immaculate engine room painted with Snow White Awlgrip for visibility and ease of maintenance.

Over the next couple of weeks, Viking will be putting the boat in the water for sea trials and testing. Click here to set up an appointment with our Viking Specialists at the 2020 Fort Lauderdale Boat Show to preview the all-new 54 Viking Convertible. Stay tuned for more information on the newly released sportfish yacht. Contact our Viking Specialists today for more information.