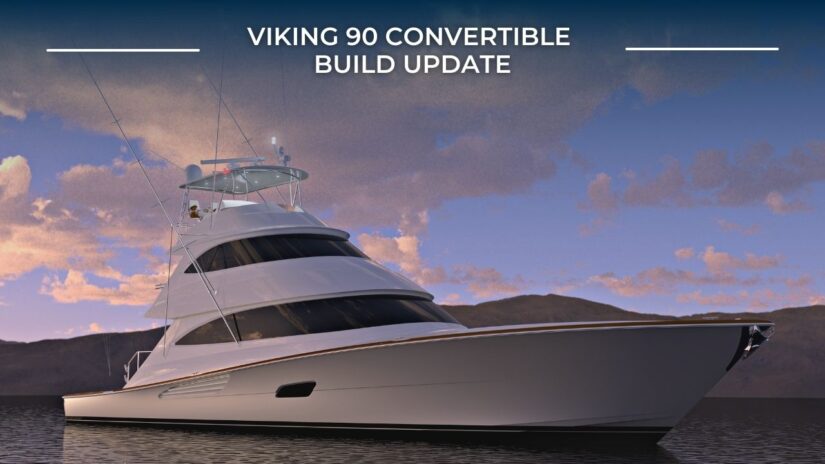 Pulling of the Mold

Production of the Enclosed Bridge

New milestones and exceptional sites are all in a day’s work at the Viking Yacht Company as the production of the flagship 90 Convertible continues. In early March at the New Gretna plant, utilizing a 150-ton Travelift and two forklifts, the Viking Plant Engineering team moved the huge steel-and-wood-framed deckhouse mold and plug out of R&D so it could be de-molded outside.

As you can see in the video below, the project required the use of two cranes to pull the 55,000-pound mold structure from its foam plug. Flips and turns occurred before positioning the mold on it is wheeled steel frame, where forklifts maneuvered it back inside VIglass – the production plants fiberglass department. From there, it will be utilized to build the 90 deckhouse — a single fiberglass section that stretches from the bow pulpit to the cockpit liner.

Moving the 90 hull mold from R&D to VIglass occurred on the second day of Plant Engineering, which took careful planning, plenty of heavy machinery, and lots of manpower. “We had great cooperation from Viglass and other departments, helping to create the space we needed,” said Plant Engineering Manager Jeff Staub. “We ended up moving each mold about a half-mile. It took a total team effort to pull off.”

A five-man team in Viking’s fiberglass department carefully orchestrated the recent application of the Gelcoat for hull No.1, which will feature a Kingston Grey color. First the Viking team begins with the preparation of the mold, a six-day process at Viking from cleaning, sealing, and waxing the surfaces five times to ensure that it is absolutely perfect and ready for the Gelcoat. Molds for boats can be reused several times before any maintenance is needed, which is very convenient in boat building. Read more about Viking’s Gelcoat process.

First, a vacuum drop test is completed to confirm there are no leaks throughout the assembly. In the case of the 90C, the vacuum originates from around the perimeter of the hull flange and on the centerline. Infusion begins on each side of the keel and after the keel is filled, resin continues to be drawn outboard and up the hull sides.

Gel time testing is done for each feed line’s resin supply to verify the resin is meeting its specific cure time. There are four separate feedline manifold areas where the flow of resin is controlled. Each area is strategically located to optimize resin flow. After the resin is cured, the vacuum bag, vacuum lines, feed lines, and other materials are removed, making the hull ready to receive its stringers and resin-infused structural bulkheads. For the infusion of a new model, it’s all hands on deck! The process entailed an eight-person crew, which took just under an hour to complete. 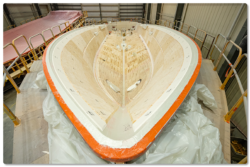 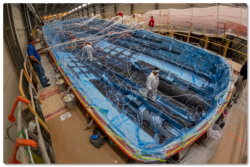 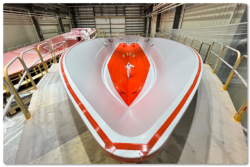 On the Line: Mechanical Updates

Production of the 90 Viking is nearing completion, as Viking shipwrights remain steadfast in the Viking mantra — building a better boat every day. In the video below, the Viking team takes you through the mechanical stage of the build, which includes the first phase of carpentry and electrical work — in addition to interior living units and the transport and securing of the deckhouse. Three departments closely work hand in hand for this massive undertaking, constructing the latest and greatest sportfishing yacht.

The most recent milestone for the 90 Viking is the production of the enclosed bridge. The first three 90s in-build are Sky Bridge models that feature an enclosed bridge complete with its own climate-controlled salon and forward control station and topped by an open sky bridge. Like many parts in the 90 sportfisher, the enclosed bridge is built with specific materials to minimize weight and maximize strength, including carbon fiber. After the section is pulled from its mold, hull No. 1 is flipped in the Fiberglass Department, and final details are constructed.

Efficient boatbuilding is what the Viking team excels at. The team works to assemble as many interior components as possible on the manufacturing floor. Using a replica of the 90′ deckhouse, they position the pre-assembled enclosed bridge’s forward control station, lower cabinetry, and forward framework. One innovation on the 90 Viking is the helm, which features a newly styled raised black Ultraleather wraparound electronics pod that can hold five multi-function displays.

After the helm and framework are in place, the enclosed bridge section can be lowered onto the platform. Viking shipwrights then fit and install the helm inside the enclosure. Next up, installation of the windshield and side windows. The one-piece mullion-less enclosed bridge windshield offers uninhibited sightlines. Following the windshield install, the enclosed bridge is then lifted from the platform and transported by overhead electric hoists down Line 1 to the 90 Sky Bridge deckhouse. Prior to transporting this section, many salon interior units were already transferred before lowering the enclosed bridge into position. Once lowered, it is secured to the deckhouse with bolts and methacrylate adhesive and further reinforced with fiberglass tabbing on the inside. The final update: the sky bridge of the 90’ sportfish is being dry-fitted for a smooth and precise installation. Stay tuned for more updates!

About the Viking 90 Sportfish

Driven by their mantra to build a better boat every day, the Ferrari of sportfish yachts was born, refining the capabilities of the luxury convertible sportfisher and becoming the new benchmark in the genre. Taking all of the great attributes of the 92 Viking, the new flagship improves on performance standards, technology, and versatility. The 90 Viking highlights a 6-stateroom, 7-head layout, 224 square-foot cockpit, and full-beam master stateroom, to name only a few. The profile of the 90C will represent a synthesis of design traits from the 92, 80, and other leading Viking battlewagons, as well as subtle motor yacht influences for comfortable cruising.

Stay tuned for additional build updates on the 90 Viking, which will make its world premiere at the 2023 Viking Yachts and Valhalla Boatworks VIP Boat Show Feb. 3-4, followed by the 2023 Miami International Boat Show February 15-19.

When looking to purchase a used Viking or new Viking Yacht, turn to the team with unparalleled experience and Viking-based knowledge. Galati Yacht Sales has been the exclusive dealer for Viking Yachts on the Gulf Coast, including Florida, Alabama, Texas, Cabo, and Costa Rica, for more than 20 years. In addition to our Gulf Coast and international yacht brokerage locations, we recently expanded our Viking dealership services to California, Washington, and the entire Pacific Coast. Our Viking Specialists not only comprehend the brand, build process, and history — they also live the lifestyle to help you determine the best features and options for your boating needs. Since 1970, we have been committed to exceeding customers’ expectations, whether purchasing or selling. Contact us today to get started on your yachting journey.