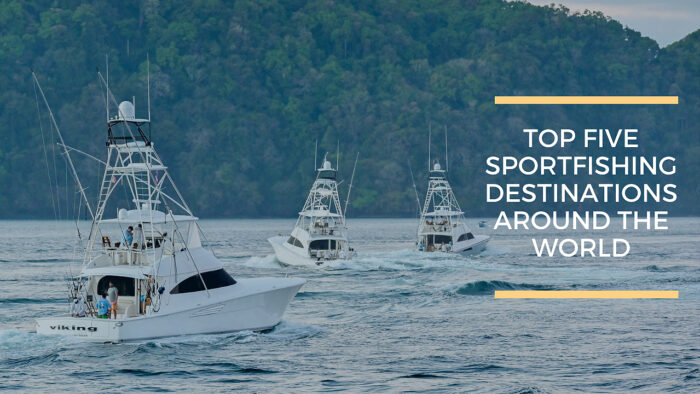 Best Sportfishing Destinations around the Globe

Calling all blue-water fishermen! Do you have a passion to fish some of the most renowned gamefish hotspots around the globe? If so, check out our guide on the top five sportfishing destinations that should be on any angler’s bucket list. These locations offer some of the best in deep-sea fishing, catching anything from blue marlin and swordfish to wahoo and tuna. In just a short amount of time, Los Suenos, Costa Rica, has become one of the most sought out locations for ultimate sportfishing excursions. These waters are home to an abundance of trophy fish including, black, blue, and striped marlin, sailfish, tuna, dorado, and wahoo. The Costa Rica fishing season is year-round, with the peaks for billfish during December through June.

Los Suenos is also home to the Triple Crown Series, highly competitive tournaments played out in three legs each year. Nearly 50 of the world’s best teams go head-to-head for three days in each event for hundreds of thousands of dollars at stake. Aside from first-class fishing, Los Suenos is the essence of Pura Vida. Accommodations at the Los Suenos Resort include condos and single-family villas with stunning oceanfront views. Learn more about Los Suenos here. Cabo San Lucas, Mexico, is an internationally awarded destination, recognized for its world-class sportfishing and stunning beaches; where the sparkling Sea of Cortez meets the Pacific Ocean. If we could paint a picture of Cabo San Lucas, it would include serene landscapes of desert and sea, flying marlin, lively pelagic, and the adrenaline rush of chasing that million-dollar game fish. The famous rock formations at Land’s End, including El Arco, the massive stone arch that ranks as the most identifiable landmark of Cabo San Lucas, are home to an abundance of glory fish. These glory fish include black marlin, blue marlin, striped marlin, as well as, dorado, wahoo, tuna, sailfish, and swordfish.

The Mexican government does protect these waters, particularly all marlin species. Usually, catch limits are as follows when fishing in Cabo: each angler is allowed to keep up to five fish per day. There is a limit of one Marlin and no more than two Dorado and Sailfish. Cabo, the marlin capital of the world, also harbors some of the largest and richest sportfishing tournaments. These tournaments bring in big money, big competition, and crazy world records. Learn more here.

The emerald waters of the Florida Keys are a saltwater anglers paradise. Here you have access to a wide variety of fish species and much less travel time compared to other destinations. The reef and blue water for deep-sea fishing are typically only ten miles or less from most destinations, which means more time for fishing. The keys stretch into the Gulf of Mexico and Atlantic, offering plenty of launch points to some of the best sportfishing in North America. Fishermen will find both light tackle and big game fish like Yellowtail Snapper, Grouper, Mahi, Marlin, Sailfish, and Swordfish. Better known as the Tuna Capital of the World, Prince Edward Island has maintained a reputation for some of the world’s finest tuna fishing. The waters of Prince Edward Island are bait-rich and perfect for hunting tuna and even shark angling. The tuna season in PEI runs from July through October and usually sees fish size range anywhere from 600-1300lbs. Most people who have fished these waters say it’s a thrill of a lifetime that any avid fishermen should experience. PEI also hosts the annual Canada International Tuna Cup Challenge. A three-day event, which attracts more than 150 anglers from around the globe. Aside from the exceptional fishing grounds, anglers can appreciate its beautiful beaches, picturesque lighthouses, great seafood dishes, and friendly people. These legendary fishing grounds are famous among serious anglers and have contributed to many IFGA world records. An abundance of various billfish can be found in these waters, including black marlin found year-round, blue marlin, sailfish, yellowfin, wahoo, and dorado. These waters are unique due to the offshore currents that push nutrient-rich water into the Gulf of Chiriquí. These nutrients support abundant microscopic life, which in turn, supports a chain of larger baitfish, bringing the larger game fish here to hunt.

Blue Marlin, as well as the Sailfish, can be found from January through March. Yellowfin Tuna are year-round, with the big guys prominent in May and June. Black Marlin averaging 500lbs, are most notorious in August and September. Dorado can also be caught year-round but are most abundant and oversized from October through February.

Are you looking for a battlewagon to compliment your bucket list of sportfishing destinations? If so, shop sportfish yachts for sale here. Also, be the first to know when pre-owned sportfish yachts hit the market. With our Yacht Shopper tool, you can search for and save your favorite boats, follow listings, and have personalized support from our sales professionals. Plus, you’ll automatically receive an email when a new yacht that fits your criteria hits the market, all from one user-friendly dashboard; built with you in mind. Start your shopping experience by visiting our dashboard here.