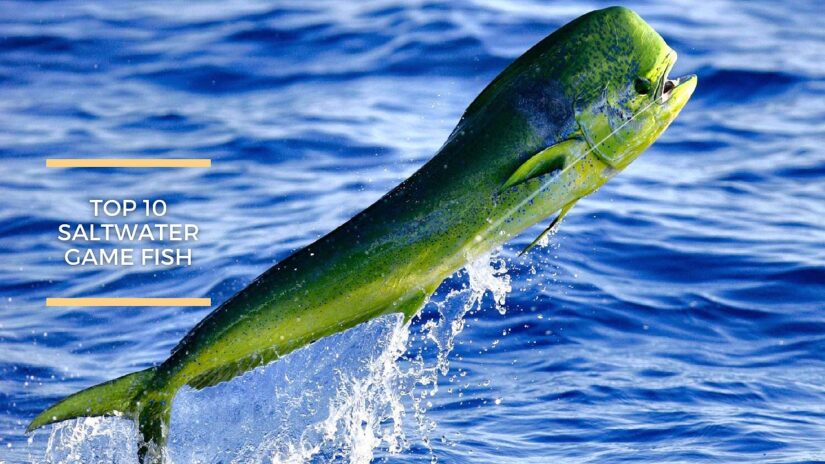 The blue-water arena is a playground for offshore anglers looking to hook the ultimate saltwater game fish. One of the greatest thrills for a sport fisherman is the fight and skill it takes to reel in a prized pelagic fish. Or, maybe it’s the mouth-watering fillet that drives your love for the sport. Regardless, all anglers will agree that sportfishing provides an exhilarating experience unlike any other.

Sportfishing dates back to 1989 after the invention of motorboats by Charles Frederick Holder. Sportfish boats appeared soon after with specific features such as deep cockpits, fitted chairs, and leather pockets for fishing poles. Today, manufacturers like Viking Yachts and Valhalla Boatworks provide world-class sportfishing boats that excel in big game fishing and seaworthiness. Whether you participate in tournaments or enjoy recreational sportfishing, here are the ten most sought-after saltwater game fish all anglers dream of landing. The most sought-after prized game fish is the Blue Marlin. These stunning fish are fast, clever, powerful, and very acrobatic. The Blue Marlin is considered to be one of the toughest to catch and highest valued. Blue Marlins are found in tropical and warm oceanic waters and can grow to 14 feet long and upwards of 2,000 lbs. Trolling large bait and teasers are the most common fishing methods when it comes to these monster fish. Be prepared for a fight that can last hours. Swordfish get their name from their mighty sword-like bill. The swordfish ranks highest among stamina when compared to other billfish in the blue-water arena. They are extremely fast, swimming over 50 mph. This game fish flourishes in tropical and temperate waters around the world. They spend most of the time at extreme depths; however, they tend to swim to the surface at night to hunt, where anglers await to troll them out. Trolling techniques include using squid, both real squid and artificial. Silver Kings, also known as Tarpon, are found on both sides of the Atlantic and recently migrated over to the Pacific Ocean. These giants are one-of-a-kind ranging in size from 4-8 feet and weighing anywhere from 60 lbs to over 250 lbs. Tarpons are excellent fighters, jumpers, and fast swimmers. Although not good to eat, these bony fish provide a fun chase that anglers crave. These fish are best caught using the still fishing method with crab, shrimp, pinfish, and live mullet.

Aside from the mighty blue marlin, the black marlin is also a remarkable catch. Black Marlin limit to the Pacific and Indian Oceans. These saltwater game fish typically roam around shallow banks and near-coastal waters. They hit a maximum length of 15 feet and can weigh over 1500 lbs. Black Marlin are also deemed one of the fastest fish in the ocean, swimming up to 80 mph. Large live or rigged bait is typically the method of choice to hook these large game fish. The IGFA record sits at 1560 lbs, caught in 1953. The Striped Marlin is well-known for its thrilling aerial displays. Like the black marlin, this species is also found in tropical Indian and Pacific waters and never fail to put on an incredible show for anglers. Along with a great fight, their stunning lavender and light blue stripes and stark white belly make for great photography. These fish typically weigh anywhere from 40-150 lbs. However, the IGFA world record stands at 494 lbs. These fierce predators are considered the fastest shark in the ocean, reaching speeds up to 60 mph. Their fast speeds and ability to turn on a dime make for a great catch. Better yet, when hooked, Mako sharks are notorious for breaching the water repeatedly, 20 feet or higher. These streamlined predators are found in tropical and temperate oceans worldwide and make for great eating when prepared properly. This top predator is known for its jumping power and fast speeds in the blue-water arena. Sailfish can be found in the Pacific and Atlantic waters and can reach speeds over 68 mph. The Pacific sailfish tends to run considerably larger in length compared to the Atlantic sailfish. Sailfish eagerly take trolling teasers and live or strip baits and can be teased into big flies and pitched lures. Bluefin Tuna are arguably one of the best tasting and a highly sought-after game fish for their commercial value. Bluefin tuna are often challenging to catch because of their size and endurance, which is where they get the name, raging bull of the sea. These saltwater giants regularly average over 1000 lbs., with a world record of 1496 lbs. These bony game fish are warm-blooded and flourish in cold waters. They can be located in abundance near Canada in the summertime.

The Dorado, better known as the Mahi Mahi fish, is a popular game fish due to its delicious fillet and extra-strong fight. These beautiful multicolored pelagic fish are found globally in tropical and temperate waters and grow up to 18 inches a year. Anglers typically catch them by using medium tackle and sight casting. Be aware, these sportfish are speedy swimmers and take a liking to floating objects, often swimming under items such as buoys and seaweed.

These torpedo-shaped fish rank among the fastest in the sea and can reel out several hundred yards of line in a matter of seconds. Although not as big as others on the list, the Wahoo is widely popular due to its incredible speed and tasty white meat. These fish are found around the world in tropical and warm temperate seas. Anglers can usually locate these fish around wrecks and reefs where they hunt smaller fish. Trolling is the preferred method when fishing for Wahoo. The Roosterfish is easily identifiable due to its large comb-like dorsal fin. Although these fish are not suitable for eating, many anglers consider them an excellent catch due to their stubborn power, speed, and ability to jump. Roosterfish are found in the warm coastal regions of the Eastern Pacific and can weigh over 100 lbs.