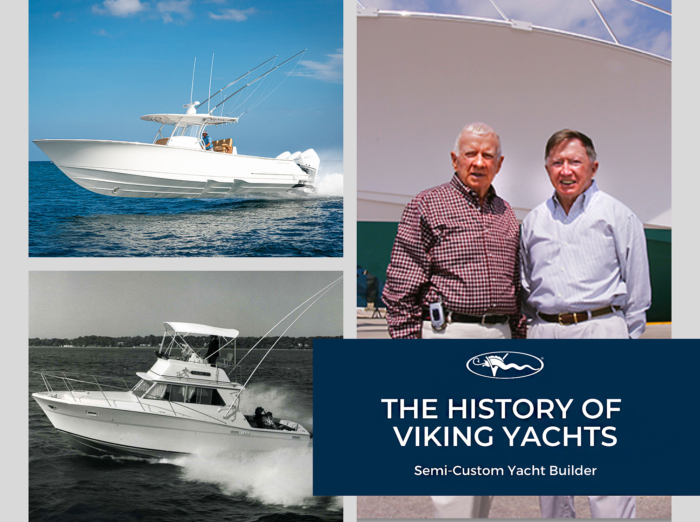 History of the Viking Yacht Company

Today, Viking Yachts company is the premier yacht manufacturer of quality convertible yachts, open yachts and motor yachts ranging from 38-90 feet. They are arguably the global leader when it comes to the sport fisherman’s market and it all began in 1964, when two brothers, Bob and Bill Healey, bought out a small struggling New Jersey boat builder known as Peterson-Viking Builders. Peterson-Viking boat builders were well-respected boat builders of 37-foot wooden sportfishing and cruising boats. Seizing the opportunity set in front of them, the two brothers set out on a joint venture that no one could have predicted would have turned into what they are today; one of the world’s leading boat builders for semi-custom fiberglass sportfishing and cruising yachts. For the last 55 years, Viking Yachts have remained under private ownership of the Healey family. A rarity in this industry. Today, Pat Healey, Bill’s son, serves as CEO and president of the Viking Yacht Company. Robert Healey Jr., who is Bob’s son, is the Executive Co-Chairman of the Viking Group, which manages Viking Yachts, large investment portfolios, and commercial and residential real estate interests.

Another great attribute of this company is employee retention. The Viking Yacht Company is home to many employees who have been with them for decades. This not only helps them with consistency on all levels, but it is what helps them strive towards building a better boat every day. With a long-term team, they all have one goal in mind—to better the business and meet the demands of consumers. In the early days, Viking Yachts assembled boats on frames at interval-based work stations; but that all changed in 1971. This is the year that the company built its first all-fiberglass model— the Viking 33 Convertible. Overnight this yacht tuned into one of the best-selling boats on the market. The launch of the 33 Convertible helped pave the way for larger models debuts such as the 40 Convertible. Launched in 1972,  the 40 C has been one of their best sellers to date.

The company saw many great achievements throughout the ‘70s and ‘80s and thrived tremendously, expanding into new markets when they acquired Gulfstar Yachts in the ’80s, a West-Florida based company known for well-designed motor yacht models. Viking Yachts was in full sail and by 1990 the company offered a full line-up of sportfish convertibles and motor yachts. As all companies endure, troubled times came in 1990. The first recession hit, followed by the infamous Luxury Tax Bill of 1991. These hits took a major toll on the company, as well as the whole marine industry as a whole. These tribulations drastically reduced the amount of employees Viking employed, from 1500 to less than 100 employees’; slowing production down to just 12 boats in 18 months. Reaching a breaking point, the brothers knew something had to be done.

Repeal of the Luxury Tax Bill

As much of the boating industry would agree, the Healey brothers played a big part in the repeal of the Luxury Tax Bill the following year. Bob had organized a national grass-roots campaign to help fight off the bill. Sending loads of laid-off employees to the capital to prove to Congress the effects of the new bill. His leadership proved to pay off, gaining enough exposure to help overturn the bill in 1993.

Even though the business slowed down tremendously the company never stopped working on new designs. The brothers knew once the tax hit was over, owners would be flocking back to the angling sport ready to buy, and they were right. In 1996, Viking released the game-changing model to the fleet— the 55 Viking Convertible. This model was constructed from the insights of fishermen, owners, and captains who were asked what they wanted to see in a boat. The result, and unmatched 55-footer that catered to the demands of tournament anglers around the world. With new stylish looks and performance measures improved, Viking Yachts sold more than 150 models in just six years.

Innovation at Its Finest

Throughout the years, the company began to design larger models to accommodate the changing market. Today they design and build yachts that range from 38 feet to 90 feet, with the 90 Viking being their largest seller to date. Viking also expanded its services opening a new facility in Riviera Beach, Fl. The new facility features slips for in-water work and land storage for larger projects and outfitting. Not to mention, Viking soon after extended their family tree to include Atlantic Marine Electronics and Palm Beach Towers in Florida to simplify the rigging process. And if being one of the largest sportfishing and cruising manufactures in the world isn’t enough, Viking Yachts announced their latest venture in 2019 with the inception of Valhalla Boatworks— a Viking subsidiary company. Valhalla Boatworks is the ground-breaking line of center consoles revolutionizing standards in performance, engineering, quality, and fishing capabilities. Helping conquer new grounds is the third generation of Healey’s, Sean, and Justin. Growing up sons of Viking Yachts CEO Pat Healey, Sean and Justin have never been far from the water. The brothers played a large role in the creation of Valhalla Boatworks. Spending a considerable amount of time and effort to introduce these game-changing center consoles to the industry. Valhalla Boatworks has had tremendous success with the V-Series, adding the Valhalla V-46 to the fleet in 2021 and introducing the Valhalla V-55 in February of 2022.

Being an authorized Viking Yacht Dealer for over 20 years, there is no one better certified to help you with your quest to find your next Viking Yacht or Valhalla Center Console. Galati Yachts’ Viking Yacht Specialists go through countless hours of product training at the Viking factory each year. Learning the ins and outs of new models and retaining old model information. You can rest assured that your Galati sales professionals understand the product, performance, and build process of every model. When considering the purchase of a Viking Yacht, our Viking Specialists can walk you through all the options so your days on the water become the best memories of your life. Our entire team supports you every step of the way, making your buying experience most enjoyable.

View the Top 10 Reasons to purchase a Viking Yacht