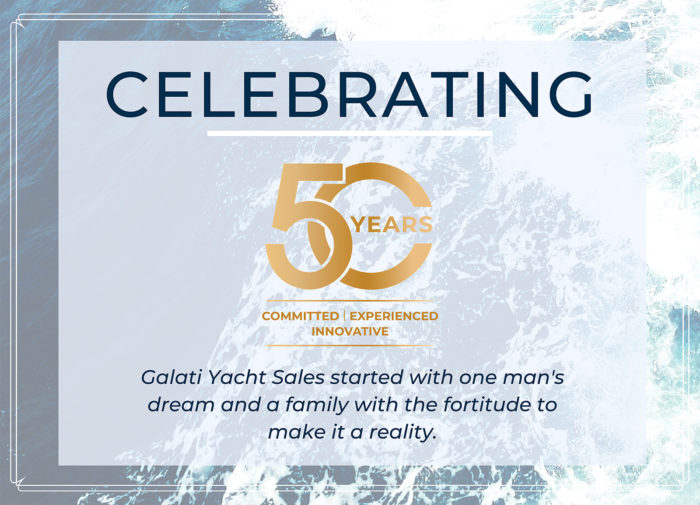 In 2020, Galati Yacht Sales will celebrate 50 years in business. A privately-held, family-run business, Galati Yacht Sales is led by a five-sibling team with eleven locations throughout the Gulf Coast, from Naples, Florida to Houston, Texas, plus Costa Rica and Mexico. 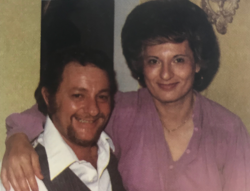 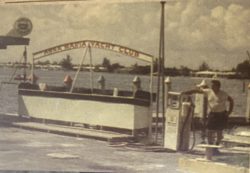 What started as one man’s dream and a family with the fortitude and dedication to make it a reality is now, 50 years later, Galati Yacht Sales (GYS), a customer-centric new and pre-owned boat dealer with 11 locations and more than 175 employees.

The Galati legacy goes back to 1970 when Michael Galati Sr. purchased a hurricane-devastated marina on Anna Maria Island, Florida. With little experience running a marina but a passion for boats and spending time on the water, Michael, along with his wife Anna Maria, and their kids, adjusted to their new life and the enormous task of repairing and managing the marina.

Everyone played their part in making Michael’s dream a reality. Anna Maria raised the family while also juggling the duties of managing the marina store and handling deliveries and billing. The children all took part as well after school and on weekends and holidays.

“It was a great place to be…to grow up” remembers Mike Jr. “We all started working out on the gas docks, washing boats, catching bait to sell – whatever would help”. Growing up in the marina, the children learned the business from the ground up. By watching and listening to their father and choosing their unique roles within the company, what started as one man’s passion quickly grew into a family passion and the start of the Galati Legacy.

Play to Your Strengths 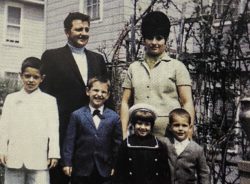 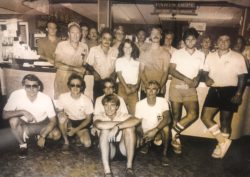 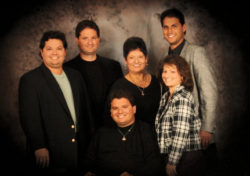 After the unfortunate passing of Michael Galati Sr in 1992, ownership passed to his five children. They took to heart something their father once told them — “Play to your strengths and you will do better than I ever could have.” The five Galati siblings, now along with the family’s third generation, have grown the business to where it is today — one of the largest, most-respected yacht brokerage companies in the world. But how did it happen?

Going back 50 years, a truly groundbreaking year for GYS was in 1976. It was the first year the business grasped the essence of growth and dipped its toe into yacht sales. Not to mention, it was the first year they attended the world-renowned Miami Yacht Show. What the family didn’t know at the time was this was just the stepping stone to an amazing venture. Since then, the company has racked up a multitude of accomplishments throughout the years, starting with GYS becoming a Cruisers Yachts-certified dealer in 1983. Today, Cruisers Yachts offers the Cantius, Flybridge, Express, and Express Coupe models. The Wisconsin-based builder is recognized by the marine industry for producing affordably priced, well-engineered motor yachts and family cruisers. GYS carries a large selection Cruiser Yachts cruisers throughout its 11 locations each year. Another notable accomplishment took place in 1996 when GYS become a certified dealer for Viking Yachts and Princess Yachts. Viking Yachts are semi-custom sportfish battlewagons that range from 37’ to 93’. They are manufactured by skilled shipwrights in New Jersey at the Viking Yacht facilities— remarkably, built 90-percent in-house. One of the reasons why GYS and Viking Yachts have made such a great team over the years is that GYS’ goal of consistently exceeding customer expectations parallels perfectly with Viking Yachts’ mantra to build a better boat every day. It’s the perfect combination of a great product backed by great service and a knowledgeable team. Today, Galati Yachts is the world’s largest Viking Yachts dealer. Since 1996, GYS has become a leader in new Princess Yacht sales and has created a strong relationship with the Plymouth, UK based manufacturer. Princess Yachts prides itself on being exceptional, whether it’s the exceptional design, function or ride, or all three. Princess Yachts is determined to develop even more ingenious ways to ensure every last millimeter of its boats are ergonomically sound, highly practical, and spatially perfect. Whichever model the customer chooses, they are all built to deliver unforgettable experiences for family and friends. 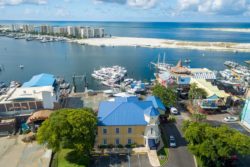 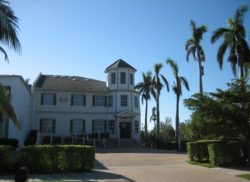 Four years later, Galati Yacht Sales expanded from Anna Maria Island to not just one, but two new locations on Florida’s Gulf coast. In 1999, GYS opened its Destin office doors in February and the Naples office in July. The Destin location sits right on the harbor, in the hub of the fishing and boating industry of the Emerald Coast. This destination location also features a state-of-the-art service marina. In the heart of Old Naples, the GYS Naples office is walking distance from the shops and restaurants of 5th Avenue and Tin City.

Exactly one year later, GYS expanded yet again to the Tampa Bay area, opening that location in July of 2000. The Tampa dealership showcases up to 50 boats in and out of the water. Not to mention, GYS’ Tampa location was the fourth to hold a state-of-the-art service yard to better serve customers on the gulf coast. A notable and important accomplishment was when GYS became a Marine Certified Dealer in 2005. The Marine Industry Certified Dealer Program is a tried-and-true program that has elevated dealerships that desire to be the best and commit to becoming the best.

The program helps dealers to adopt sustainable principles that lead to great retail experiences for customers and a thriving marine business. The program not only serves the company but also benefits customers as well. When customers purchase a vessel from a Marine Industry Certified Dealership they have a marine consumer commitment; an assurance of a dealership’s commitment to excellence. The next year saw another big moment in GYS history when it was selected to represent Maritimo Yachts in 2006. GYS is the largest dealer of new Maritimo Yachts in the U.S today. Built in Australia, Maritimo Yachts are long-range cruising yachts that lead the way in engineering excellence, exceptional build, integrity, and innovative design. Maritimo uses offshore racing and specifically an Offshore Powerboat World Championship background to deliver performance while wringing every last bit of weight and cost out of a boat. Within the next couple of years, GYS’ commitment to its customer’s experience on the water earned the company the maritime industry’s highest achievement — the Boating Industry Hall of Fame, as one of only seven dealers nationwide to be inducted. Boating Industry’s Top 100 Hall of Fame recognizes dealers nationwide who have won the coveted Dealer of the Year award twice, which happened for Galati Yacht Sales in 2007 and again in 2008; while also opening two new locations in Texas and Orange Beach. To say it was an exciting couple of years would be an understatement. Furthermore, in 2009, GYS was officially inducted into the Hall of Fame. Proving to exceed expectations in managing a dealership with multiple locations, high levels of customer service, and high volume sales. 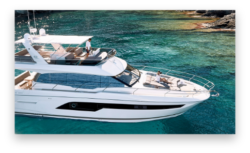 Within the last 10 years, GYS has continued to grow and reach new heights. GYS became a dealer for Prestige Yachts in 2014 and has since been a three-time winner of the Prestige Yachts Top Performing North American Dealer. And, last year, Galati Yacht Sales extended its relationship with Viking Yachts to become a Valhalla Boatworks dealer. Valhalla is Viking’s new center console line of high-performance fishing machines. 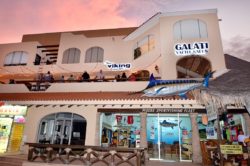 Growth and new heights were also achieved when GYS opened doors to a second Texas location, an office in Los Sueños Costa Rica, an office in Sarasota at Marina Jack, and an office in Cabo San Lucas, Mexico. Not to mention an expansion build-out for GYS’ home base for the past 50 years ‒ the Anna Maria office ‒ and a future commitment to a new Tampa location at Marina Pointe.

Throughout the years, the Galati family has been very committed to the industry that has been so good to them. Whether it be through training, volunteering or philanthropy, Galati Yacht Sales steps up. Members of Team Galati serve on the board for the International Yacht Brokers Association, has more yacht brokers who are CPYB- certified, and actively contributes and participate in NMMA and MRAA. Additionally, the company supports the Billfish Foundation, and the Florida Fish and Wildlife Foundation, among other charities. 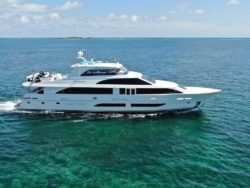 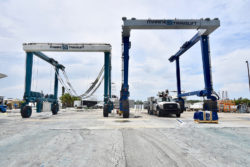 In February 2019, Galati introduced the Galati Signature Series G120 by Hargrave Custom Yachts. This 120’ motor yacht is available exclusively through Galati and was designed by a knowledgeable owner and captain in partnership with Galati and Hargrave. Galati Yacht Sales Anna Maria recently increased the size of its Marine Travelift. This investment allows for the haul-out of larger yachts. 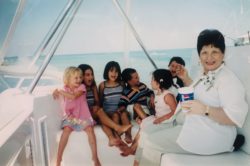 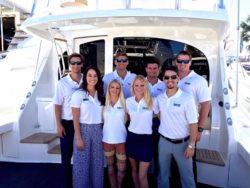 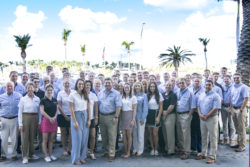 So, fast-forward to 50 years in business. GYS has welcomed the third generation of the Galati family into the company and business is full speed ahead. Twelve cousins, working alongside their parents, and the 175-plus members of Team Galati are helping to drive the company’s future growth. Now 11 locations with four full-service marinas that are continuously kept busy with the preparation and delivery of new yachts to customers. GYS also recently increased the size of its sales and support team by more than 10 percent. They also continue to invest in marketing efforts to expedite its brokerage and new yacht sales. 2019 was a record-setting year of new boat and pre-owned yacht sales.

Built on One Simple Philosophy: Always Do Right By the Customer

As Carmine Galati, Sr. said, “Our customers always come first with us. We have a plan in place, but we rely on them for our direction”. Which is precisely what GYS has continued to do throughout the years. Even through the hard times, which every company endures, GYS has overcome and surpassed industry standards. This is partly due to the strong foundation on which the company was built. The simple philosophy of always do right by the customer; demonstrated by providing the best boating experience possible and consistently exceeding the customer’s expectations. Taking a walk back in time through the last 50 years is truly eye-opening and it shows that the Galati family is truly living the American dream. What started as one man’s passion grew exponentially, touching the lives of so many around them, creating boundless relationships with customers, employees, and overall, imprinting their mark on the marine industry forever. If you can look back at the Galati legacy and take one thing from it all…it’s that there is no telling what new heights GYS may climb in the next 50 years.

Galati Yachts will celebrate throughout the year with receptions for customers in Anna Maria Island and Destin; in addition to employee appreciation parties at all locations.

Learn more about Our Tradition & History