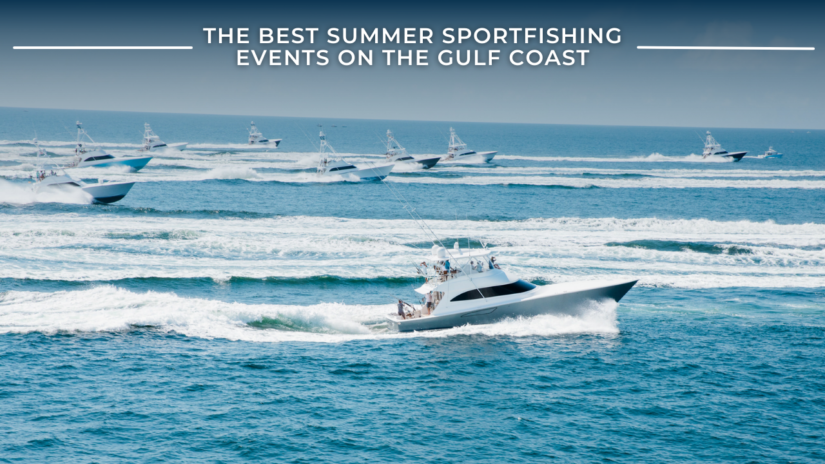 The top 2022 summer sportfishing events on the Gulf Coast

Mark Your Calendars for the Premiere Sportfishing Tournaments on the Gulf Sportfishing enthusiasts rejoice the summer tournament circuit is near, and we have the latest line-up of premier events you don’t want to miss. We can’t think of a better way to spend the summer months than by participating in some of the most renowned fishing tournaments in the world — from Louisiana to Destin and down to Port O’Connor Texas. Mark your calendars and get ready for some of the largest fleets, record-breaking wins, and great memories to cherish forever with these top summer sportfishing events on the Gulf Coast.

*Galati Yacht Sales is a proud sponsor of the summer sportfishing events below.

Kicking off the tournament season is Viking Yachts Key West Challenge, exclusively for Viking Yacht owners. The tournament is more than just fishing; it is about having a great time with family and friends in one of Florida’s best settings — Key West. Contact Us Today To RSVP (833) 701-0472

Louisiana is home to some of the best sportfishing in the world and the first premier offshore fishing event begins on April 25 through May 1. Hurricane Hole Resort and Marina host the Louisiana Gulf Coast Billfish Classic in Grand Isle, LA.

The MONGO Offshore Challenge returns on May 1 as a quest to see who will catch the largest game fish of the season. Extending through September, this tournament includes Blue Marlin, Swordfish, Tuna, Wahoo, and Mahi categories. Anglers get to choose which category to compete in and go up against two divisions, the East and Gulf. The Gulf division boundaries will include Gulf waters; Texas to Ft. Myers Florida. Each species category is winner take all, along with winner take all optional pots. The MONGO format levels the playing field and invites vessels of all sizes to compete and fish as often as you like.

The Emerald Coast Big Game Fishing Club presents the first annual Emerald Coast Billfish Extravaganza, based out of Destin, FL. The ECBGFC is a modern, big game sportfishing club setting new trends in the community while supporting billfish conservation and the local community. This event aims to take the pressure off of blue marlin and level the playing field. Every billfish release is 200 points whether it’s a blue marlin, sailfish, or white marlin in this tournament.

The 49th Annual New Orleans Invitational Billfish Tournament kicks off May 12th and is regarded as the tournament that put the Gulf of Mexico big-game fishing on the map, inspiring other offshore tournaments across the region.

This premier event is notorious for big fish, big money, and some serious fun; the Orange Beach Billfish Classic is one of the top events on the Gulf. OBBC is also the first leg to the Gulf Coast Triple Crown Championship series and the largest tournament donor to The Billfish Foundation. This family-run event emphasizes team participation and is the only tournament on the Gulf Coast owned and operated by sports fishermen.

Mobile Big Game Fishing Club presents the Gulf Coast Masters sportfishing tournament, kicking off May 23rd. The Orange Beach Marina hosts the event and is spectator-friendly. Compete with some of the best on the Gulf Coast for your chance at some serious cash.

Make your way to sportsman’s paradise this summer for the Cajun Canyons Billfish Classic. This year’s event is hosted by Cypress Cove Marina, located in Venice, Louisiana. This sportfishing tournament features a modified-release format for billfish species, along with big prize money for Blue Marlin, Tag or Release, Dolphin, Tuna, and Wahoo. Rest assured, there is something for everybody.

Kicking off June 6th at the Golden Nugget Casino & Hotel is the Mississippi Gulf Coast Billfish Classic. Going into its twenty-sixth year, the sportfishing tournament is popular for its excellent offshore bite, record-breaking fish, millions in cash payouts, exciting atmosphere, and high-energy gaming.

The 20th annual Emerald Coast Blue Marlin Classic is one of the richest offshore fishing tournaments on the Gulf Coast. With a huge buy-in and high cash prizes for 2021, it is expected to be another record-breaking year. Join us at the Wind Creek Casino and Hotel-Atmore in Sandestin this summer.

Since 1970, the Pensacola International has become a known tradition in the downtown Pensacola area. Held at the famous Palafox Pier, this event continues to take pride in presenting the most affordable and family-friendly tournament on the Gulf Coast.

The right team and the right venue, equal the ingredients that make up the greatest show in sportfishing. The Blue Marlin Grand Championship is one you won’t want to miss. The Wharf in Orange Beach presents this tournament finale of the acclaimed Gulf Coast Triple Crown.

The Texas Lone Star Shootout is an Invitational Billfish tournament known for its great format, fun times, big payouts, and outstanding contribution to charitable causes. The event provides the opportunity to compete against the best billfish teams on the Gulf Coast while enjoying great sportfishing. Learn what to expect at the Lone Star Shootout.

Known as the monkey boat tournament, the Billfish Limited was created for small boats to chase big fish. The tournament is open to any size outboard-powered vessel as well as any vessel 36′ in length and under regardless of means of power. The MBGFC Billfish Limited Tournament is held at the Mobile Big Game Fishing Club Clubhouse at Orange Beach Marina.

Calling all lady anglers! This sportfishing tournament is for you. The MBGFC Ladies Tournament kicks off July 29-31, 2022, where the “REEL” ladies come to play.

Old school fun, good times, and memories are what the Orange Beach Open is all about. This family-fun tournament is kicking off August 4-6, at the Wharf Marina in Orange Beach, Alabama. This tournament is trolling only, no live bait fishing. Best of all, it is a no-kill tournament.

The Texas Billfish Classic is famous for its big payouts and contribution to charitable causes. It is one of the most popular and enjoyable tournament formats on the Texas Gulf Coast. Join us for one of the most anticipated summer events.

Being one of the largest fishing tournaments on the Gulf Coast, the Labor Day Invitational offers anglers a chance at some serious cash. Join us this Labor Day weekend at the Orange Beach Marina.

View all of our events, tournaments, and boat shows by clicking the button below.