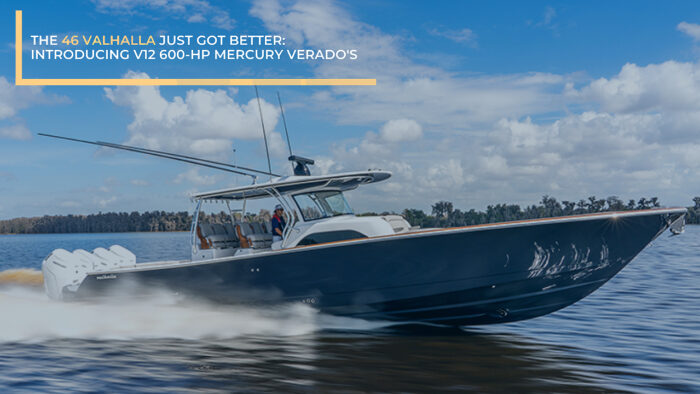 How could you possibly make the all-new Valhalla Boatworks V-46 any better than it already is? Throw on the most powerful Mercury outboard engines to ever exist, that’s how. Mercury Marine made a huge announcement this year, introducing game-changing outboards: 7.6-liter V12 600-hp Verado outboards. With the unwavering strength of a V12 powerhead, the 600hp Verado outboard delivers extraordinary range and performance to take your boating adventures to new destinations. Mercury’s advancements in handling and control are taking the industry by storm. These innovations include the outboard segment’s first independent steerable gearcase and an industry-first automatic two-speed transmission.

Hull No.2 of the 46 Valhalla Features All-New Mercury Engines Hull No. 2 of the Valhalla 46 center console– powered with four of the new Verados – was one of only six boats from different manufacturers chosen to highlight the new power plants. Powered by the new V12 600-hp Verado outboards, the stunning high-performance 46’ center console hit a top speed of 75 mph and accelerated from 0-20 mph in 4.8 seconds. Moving forward, the V12 600hp outboard motors will be available on all Valhalla Boatworks V- Series models.


“We’re extremely excited,” said Viking President and CEO Pat Healey. “This is truly an incredible engine, with ground-breaking performance and the kind of innovation we’ve come to expect from Mercury. They continue to impress us, not only with their products but with their support and attention to detail.”

The all-new engine features several innovative outboard and boat-control features and technology, some of which include: a naturally aspirated, large displacement, quad-cam powerhead; a steerable gearcase with contra-rotating dual propellers, two-speed automatic transmission; and enhanced digital controls and joystick. “Whether you’re in joystick mode, backing down or coming out of the hole, the shifting and overall operation is silky smooth, and the layout of the DTS is intuitive and easy to use,” stated Captain Ryan Higgins, with Valhalla Boatworks. The 7.6L V12 Verado engine also offers superior fuel economy and extended range; refined power with exceptional torque; a smooth and quiet ride, thanks to its innovative cowl design; and backed by a three-year corrosion warranty. Another noteworthy mention includes the engine being capable of operating for 200 hours before requiring routine service; including oil changes and basic maintenance. These services can be done through the top cowl service hood while the boat is in the water. The entire cowl doesn’t require removal for more in-depth service until 1,000 hours.

Also, the steering system is another unique trait of these 600 HP engines. “The steering occurs underwater, using a steerable gearcase that pivots the contra‑rotating props to the right and left,” says Mercury’s Travis Hayes. “The entire engine remains static, with the gearcase being the only component that moves. The driver can easily monitor the gearcase position or rudder angle via the Mercury engine display at the helm.” Advantages include the elimination of a boat‑mounted steering system and enhanced handling and maneuverability. “The gearcase can pivot up to 45 degrees under joystick operation, which provides more authority to effectively maneuver a large boat like the V-46,” said Travis. “And with the static engine position, the boat’s center of gravity is maintained for even better control.” Valhalla Boatworks will offer the V12 Verados in both quad and triple configurations on the V-46. The engine will join two other propulsion options: quad Mercury Verado 400s and quad V8 450Rs. Contact our Valhalla Specialists for more info. Click the button below to learn more about the 46 Valhalla.