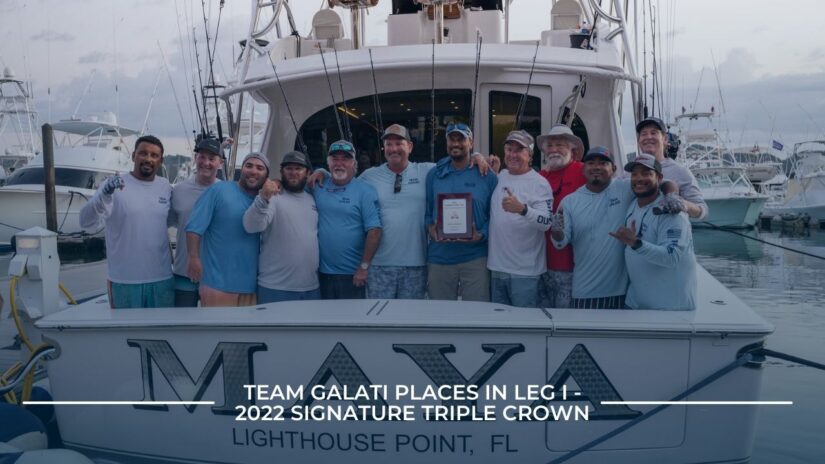 Team Galati is a force to reckon with this year at Los Suenos, placing second in Leg 1 of the Signature Triple Crown and third in the Ladies Only tournament. The notorious Signature Triple Crown series stretches over three events held in January – Leg 1, February – Leg 2, and March – Leg 3, all three platinum-sponsored by Galati Yacht Sales. The sportfishing tournaments are hugely successful not only because of the incredible number of billfish releases but also for the experience, world-class competition, and spectacular scenery in Los Suenos. Here is a recap of Leg 1 – 2022 Signature Triple Crown. Kicking off the tournament series was the 2nd annual Ladies Only event on January 25th. Thirty-nine lady anglers on 13 teams signed up to compete for $32,500 in cash and other prizes. The Ladies Only Tournament is a one-day boat tournament before each leg of the Triple Crown. Teams target sailfish and marlin and can register up to four lady anglers (no professional anglers allowed). The points from the three individual events will be tallied up to determine the top three teams overall, as well as the Top Angler, announced at the final awards banquet on Saturday, April 2nd.

The 13 teams headed out to the fishing grounds around 5:45 am on Tuesday. Team Galati, known for coming up from behind, moved to third with a sailfish release at 12:56 pm. By 1 pm, the teams had released a combined total of 53 billfish. After getting bumped down, Team Galati moved up the ladder, taking third on time with two sailfish releases between 3:48 pm and 3:55 pm, bringing them to 2400 points, concluding Leg 1. Overall, the lady anglers released 57 sails and 32 marlin for 89 billfish over the eight hours of competition.

Lady anglers included Jane Galati, Leanne Healey, Debbie McDowell, and Sarah Winkworth aboard the 58’ Viking MAYA. Special thanks to Captain Tony Carrizosa and the crew, who did an exceptional job onboard. Leg II kicks off Tuesday, February 22nd. The rankings for the first leg are as follows:

Following the Ladies Only event was the Los Suenos Signature Triple Crown. One hundred and eighty anglers signed up to participate on 37 teams for the first leg of the 2022 event. The teams fished three days starting Thursday to determine the top three teams and top angler for Leg 1.

Day 1 saw marlin after marlin, paying homage to the billfish capital of the world. By the time the last fish, a marlin by Outage at 4:12 pm, a total of 209 sails and 71 marlins were released, for a total of 280 billfish. Vaquero finished the day in first, achieving 3000 points with 5 sails and 5 marlin by 3:18 pm, followed by Ohana in second with 2800 points, and Miss AC in third with 2700 points.

Day 3 escalated fast, with 280 billfish released by 10:00 am. As of noon, the leaderboard had Miss AC on top with 5100 points, Max Bet in second with 4700 points and Billfisher in third with 4700 points. The tournament couldn’t have been more exciting on its final day, with the marlin making all the difference. At 3:45 pm, Team Galati released a marlin, moving them onto the leader board from sixth place to second.