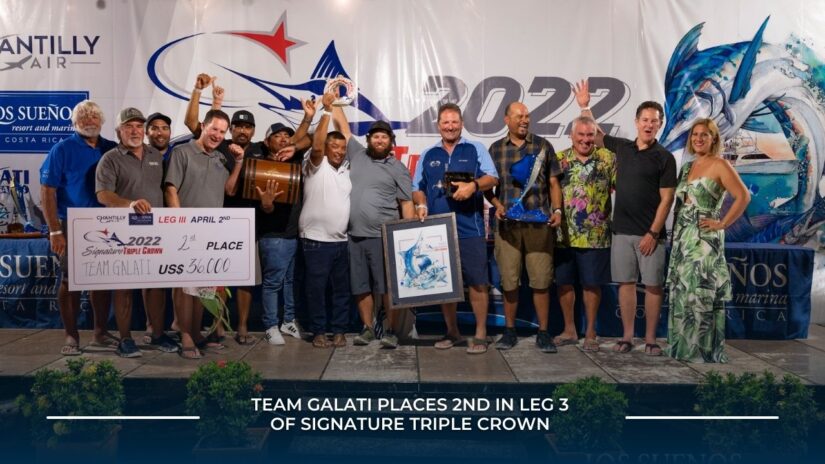 175 anglers and 35 teams participated in all three legs of the 2022 Los Suenos Signature Triple Crown, which were, therefore eligible for the title of Series Champion. The teams fished from Thursday, March 31 through Saturday, April 2, for the final leg of the series, competing to see who would take home the custom trophy and grand prize check for $100,0000. Billfisher kept the lead on day one after calling in a double marlin hook up three minutes after lines were in. The day started out promising with nine marlin releases by 9 AM, and then an hour later increasing to 13, along with 49 sails. At the end of day one, Billfisher was in the lead, followed by Vaquero and Sea Fix.

On day two, Team Galati, always a silent contender, came up from behind in second on time with 2,500 points over Miss AC with 2,200 points. The same three teams were in the same positions come noon on day two, despite the overall fish count increasing to 322 sails and 33 marlins; however, there was a little upset in the afternoon when Miss AC bumped Team Galati to third with 5 sailfish releases between noon and 2 PM. Not long after, Billfisher had increased to 3,400 points, and Team Galati was then at 2,700 points. Max Bet released 3 sails and a marlin between 2 PM and 4 PM, catapulting them to second place on time, and tied with Billfisher, who also had 3,400 points. Team Galati rounded out the leaderboard at the end of the second day with 2,900 points. The two-day combined total of releases for all teams was 404 sails and 46 marlins. There were two hours left on the clock, and the fleet already had a three-day combined total of 563 sails and 71 marlin. Over 60 billfish were released between 2 PM and 4 PM alone. After a make-or-break third leg for the top teams, the final leg ended with Max Bet in first for leg 3, followed by Team Galati in second with 33 sailfish and 2 marlin releases for 4,300 points, and Fish Tank in third.

Out of the thirty-five teams that participated in all three legs of the 2022 Signature Triple Crown, there can only be one Champion and that honor was earned by Team Sea Angel on Rum Runner. They earned 14,100 points over the three legs of the series and ended up winning on time. Congratulations!

Also, shoutout to Laura Jessen of Fish Tank for winning the Ladies Only Tournament. Fish Tank, a 65′ FTC captained by Ben Horning, ended up winning the Ladies Only Series with 7,400 points, 2,000 points ahead of the closest runner-up, Eight Eights. Making this win even more impressive is the fact that Laura Jessen, the boat owner along with her husband Chris Jessen, was the sole angler and caught and released all the fish herself over the three events, including 1 sailfish and 4 marlin in Leg 3 alone. Awesome Job!

Congrats to all who participated in the Signature Triple Crown Tournament, and we look forward to seeing everyone in 2023. Save the dates below for next year’s series championship.