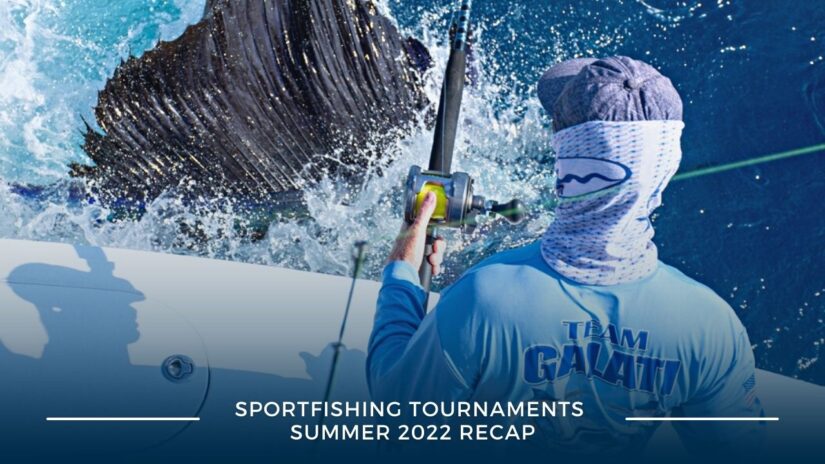 The 2022 summer tournament season is nearing completion, and an eventful season it was! Sportfish owners all over the Gulf Coast participated in renowned tournaments that saw some tough competition, big catch celebrations, and hefty payouts. From Texas to Destin and down to Anna Maria, Team Galati is honored to sponsor and partake in these summer sportfishing tournaments; while cheering on all our customers and friends on the blue-water arena. Let’s take a look back at the summer line-up and re-live the remarkable moments and successes of everyone who partook in the events. The Orange Beach Billfish Classic was the first big game sportfishing tournament of the summer season on the Gulf Coast. It is also the first leg of the Gulf Coast Triple Crown Championship Series, well-known for big fish, big money, and a seriously good time. Forty-one teams competed for $850,000 over Memorial Day weekend at The Wharf Marina. Throughout the tournament, twenty-six verified blue marlin releases were scored, along with nine white marlin releases, for a total of thirty-five billfish released.

Congratulations to Team HIGH COTTON 92′ Viking for the heaviest Marlin to win the OBBC! Team CE also released five Billfish to capture the Top Catch & Release Honor, and Team A WORK OF ART cashed a $258,970 check as the Top Money Winner. The Orange Beach Billfish Classic will return May 16-21, 2023, for its 27th year. The Gulf Coast Masters, presented by the Mobile Big Game Fishing Club, commenced in May at the Orange Beach Marina. Team SKIN DEEP was awarded the #1 spot for top Blue Marlin weighing in at 702lbs. Team BIMINI BABE placed second in the category with a 588.8lb Blue. Team QUANITIFIED came in first for Top Catch & Release, followed by Team BANDITO and Team MOLLIE. All in all, 64 game fish were caught over the course of the tournament. Next year’s event will take place May 22–28, 2023. The Cajun Canyons Billfish Blast is another qualifying event for the Gulf Coast Triple Crown held in Sportsman Paradise. Better known as downtown Venice, Louisiana — home of true world-class sportfishing and some of the best fishing grounds around. This tournament features a modified-release format for billfish species and big prize money. The MGCBC tournament is widely known for its great offshore bite, record-breaking fish, millions in cash payouts, exciting atmosphere, and incredible energy gaming and entertainment. It is also home to the Gulf of Mexico 1054.6lb Blue Marlin record. The IT JUST TAKES TIME team swept the blue marlin divisions this year by weighing the only qualifier during the tournament — a 763.6-pound blue marlin, giving the team an unprecedented win for the third year in a row.

The team aboard the 72 Viking saw a whopping payout of $630,985 for the marlin tournament award, crew division, and all marlin optional entry categories. The total prize purse for this year’s event was $1.36 million. Team QUANTIFIED, a 64 Spencer had an impressive showing with the top dolphin at 37 pounds, three sailfish releases, and three white marlins. Their total payout was $140,060. The Top Release boat with four blue marlin on its ledger was RAMBLE ON, with a $120,170 payout. The 27th annual Mississippi Gulf Coast Billfish Classic will take place June 5-11, 2023. The ECBMC tournament is one of the richest and most anticipated events on the Gulf Coast. This year saw an 84-boat fleet and over $1.9 million in cash prizes. In total, 68 Billfish were caught, consisting of 43 blue marlin, 17 white marlins, and 8 sailfish. 75 Gamefish were tallied, with 27 dolphins, 28 yellowfin tuna, and 20 wahoos. A WORK OF ART took home the gold, winning the tournament with a 638.7 lb. Blue Marlin, followed by Team BENDETTA and TEAM RAISE ‘EM UP. Team QUANTIFIED took Top Release Team with 12 Billfish releases, followed by Team RISING SON’S and Team C-YA. Congratulations to all! Catch the excitement next year, June 21-25, 2023.

The Pensacola International Billfish Tournament has become a known tradition in the downtown Pensacola area over the years. The competition is a compromise of the best in fishing, substantial crowds, and memorable award celebrations. This year saw a great tournament with many great wins. Congratulations to Team QUICKTIME for taking first place with 1252.4 points, ALL IN FISHING taking second with 1200 points, and LA POSADO taking third with 962 points. We hope to see everyone next summer in Pensacola! Boats from all around the Gulf come to fish the Blue Marlin Grand Championship in Orange Beach, AL. The Blue Marlin Grand Championship is not only the finale of the acclaimed Gulf Coast Triple Crown Series — but a tournament experience beyond others. The tournament kicked off a little later than expected due to a weather delay, but in the end, it was a huge success, with final weigh-ins coming down to just a few pounds between first place and second.

However, team IT JUST TAKES TIME took home the gold with a 568.4lb blue, overtaking team A WORK OF ART, weighing in at 557.4-pounds. For the Tournament Catch & Release Category, team C-YA took first with 7 Blue Marlin Releases, SOUTHERN CHARM in second with 5 blues and two white marlin releases, and Team PEARL in third with 5 blues and 1 white. The Blue Marlin Grand Championship returns to The Wharf in Orange Beach, Alabama, July 12-16th, 2023. The 2022 Texas Lone Star Shootout is an Invitational event known for its great format, fun times, big payouts, and large contribution to charitable causes. Shout out to the tournament champions, Team EL PATRON, followed by WALK WEST in second, and Team WHY KNOT in third. Congratulations to all for a great turnout. Next year’s tournament commences July 18-23, 2023. The Billfish Limited was created for small boats to chase big fish and is open to any size outboard powered vessel, as well as any vessel 36′ in length and under regardless of means of power. The MBGFC Billfish Limited Tournament is held at the Mobile Big Game Fishing Club Clubhouse at Orange Beach Marina. The top three ranking boats this year included: BLUE CRAB in first, REEL TURNER in second, and HYER STANDARDS in third. Congrats to all who participated. The MBGFC Ladies Tournament, held on July 29th-31st, was a spectacular event with the top three teams as follows: RISING SONS, COLD MOTION, and BREATHE EASY. The Texas Billfish Classic is one of the most popular and enjoyable tournament formats on the Texas Gulf Coast. It is also a sanctioned event of the ITB Captain of the Year Cup. For 2022, team REBECCA placed first for Billfish Release. Other notable winners include SAILS PITCH in the Swordfish category, HAMMERDOWN with top Tuna, TROPICAL HONEY in the Wahoo category, team SUN DOLL with top dolphin, and DRAGIN’ UP with the top female angler. Congratulations to all teams!

We’ll see you next summer for the Gulf Coast Sportfishing Tournaments!

This summer saw some of the largest fleets, record-breaking wins, and wonderful memories to cherish forever. We look forward to next year and all the excitement and experiences that await here on the Gulf Coast blue-water arena. For now, check out some upcoming events, such as the Los Cabos Billfish Tournament, and keep track of next year’s tournament dates by following our events page below.