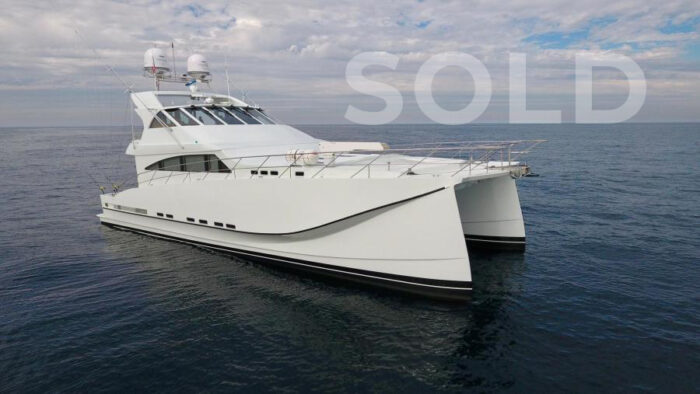 Closing out the month of September, “Gato Blanco” a 75 Custom Catamaran with a unique back story, closed with the assistance of Nick Galati. The buying party was brought in by SYS Yacht Sales- Doug Mashke. This custom Catamaran wasn’t your typical sportfish yacht, but she sure was designed and built like one by her previous owner. We had the privilege to talk to her previous owner and captain upon listing the 75 Catamaran, on what made this traveling sportfish so special. You can read that story below. Team Galati extends congratulations to the previous owner, Tom Meredith, for the sale of “Gato Blanco.” 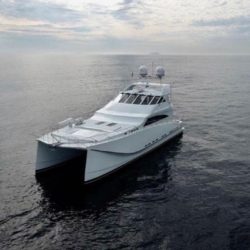 The Custom 2012/2016 75 Custom Catamaran “Gato Blanco” may not look like your typical sportfish yacht but don’t let that fool you. This head-turning vessel is so much more than that. She is 100% built and commissioned in the US. Originally built in the infamous yacht building state of Washington in 2012, an in-depth re-fit and re-power were completed in San Diego in 2016, under the careful oversight of the world-renowned naval architect Tim Nolan.

Gato Blanco was designed and built as a traveling sportfish yacht with an extensive range, incredible sea keeping abilities, optimized functionality, and extremely comfortable living arrangements. She is powered with Cat engines, very fuel-efficient, a proven fishing catamaran, and a perfect cruising vessel. The ultimate versatile platform! We had the opportunity to chat with Captain Rick who has captained the custom 75 Catamaran since day one, along with owner Mr. Meredith, where they explain just why this 75 Powercat is unlike any other custom sportfish yacht out there. Captain Rick has been a master captain since 1984. He has done everything from commercial fishing, charter fishing, and recreational fishing mostly along the Pacific Northwest coast. Back in 2010, Tom Meredith introduced Captain Rick to Gato Blanco, the Custom 75 Catamaran. At this time, she was near the end of her construction phase and ready to start traveling.

As most sportfish lovers long to have a high-speed tournament yacht, this was never Tom’s intentions. Instead, he has always drawn enjoyment out of recreational fishing and just simply being outdoors. He grew up around houseboats on the Mississippi River and started running boats at just six years old. In 1974, Tom and his family moved their boating life to Florida where they owned everything from trawlers, cruising boats, several sportfish yachts including a 65 and 55 Hatteras, and several center console boats. He has been around boating and fishing all his life. Being at a point in life where fishing and time spent with family and friends is of the utmost importance, Gato Blanco was constructed as a very comfortable way for Mr. Meredith to get out on the blue-water arena and enjoy what he loves most— fishing.

One of the first adventures Gato Blanco endured was a seven-month-long private, recreational fishing trip from San Diego to Sarasota. This trip was an opportunity for Tom to enjoy the yachting lifestyle and the amazing fishability of Gato Blanco. Along the way, they made stops in Cabo, Papagayo and Quepos Costa Rica, Panama, and Isla Mujeres, Mexico, turning heads wherever they went. 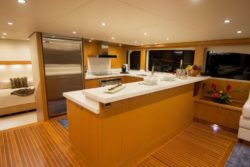 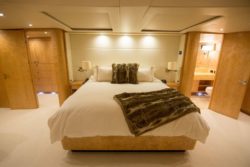 The long-term goal when building Gato Blanco was the idea that the 75 Powercat would be suitable for the Keys or Bahamas. Something that could go into shallow water comparatively with a very reasonable draft, yet still have a comfortable living space. Having spent seven months on the boat, you can imagine just how comfortable this yacht must be.

Tom and Captain Rick both described the accommodations to living in a house. With an open salon layout that flows into the well-appointed galley and large dinette, plus five staterooms, including an expansive full-beam master suite, this yacht has the comparative livability of a 100+ foot yacht. 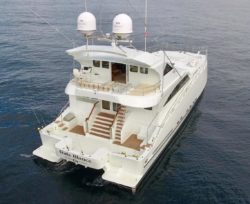 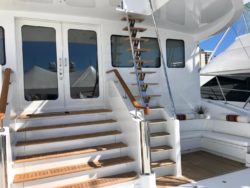 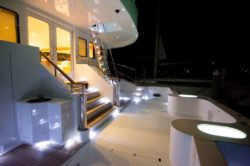 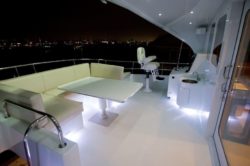 The amazing thing about this 2012/2016 75 Custom Catamaran is that even though she has the livability of a 100+ foot yacht, she fishes like a 40 footer. To start, the stability of this 75 Catamaran is incredible as a fishing boat. The driftability of this boat is hands down nothing you would experience in a regular monohull without a Seakeeper. Compared to your typical sportfish and monohull yachts, Gato Blanco offers a super quiet ride. Captain Rick states, “Gato Blanco knifes through the water like butter. She is like nothing I’ve ever experienced having been on many monohulls my whole life.”

The hull itself draws about 39 inches from the bow to the stern, including the running gear. That being said, Gato Blanco draws less than 5 feet of water. “You could be doing 14 knots on the bay and walk up the side of the boat and almost feels like you are idling.  There is no wake noise from the side of the boat and she rides flat the whole time,” states Captain Rick. Gato Blanco is powered by twin Caterpillar diesel engines with a top speed of 23 knots. For those sportfish lovers, an added plus they came across during their seven-month excursion is that billfish love this yacht. They caught a ton of marlin with the boat, which seemed to be intrigued by the footprint. One thing that helped fight these marlin is the trolling and back down of this vessel. Captain Rick states, “This boat backs down like nothing else, which is pretty unusual for something of this size. When you go in reverse you can chase anything down.” Which came to be true during their excursion, having caught more than enough fish to make any angler smile from ear to ear.

The helm is also extremely comfortable with 3 Stidd helm chairs one with electronic controls, along with a dinette set up, office type space, and seating area for plenty of entertainment options. The top deck not only allows for a spectacular view but also features a sun pad and plenty of accommodation space.

The spectacular fishability continues with large dual bait wells, a lot of circulation capacity, Furuno SONAR, hydraulic riggers, an expert engineered Livewell/Tuna Tube system, and two deck boxes with independent ice chippers ready to keep your daily catch fresh. So many things have been well thought out and designed to enhance fishability. Whether you take five guests onboard and fish hard or you take 2-3 couples on board to enjoy some fishing and casual entertainment, Gato Blanco is suitable for both.

As far as performance goes, Catamarans are known for being extremely economical. You could cruise around for a week or so and spend about $1200-1500 at the fuel dock. Compare that to a monohull, which could cost you anywhere from $5000 or more at the fuel dock for the same trip. Gato Blanco features impressive range to be able to go and explore and have fun doing so without having to make a stop at every marina to fill up the fuel. Don’t let the size of the boat intimidate you. Gato Blanco is very manageable with few aboard. Captain Rick was able to operate Gato Blanco with one additional crew member from San Diego to Sarasota without any difficulty. Also, the equipment on Gato Blanco is how you would say…uncomplicated. It is very manageable to operate with just two people and allows you to enjoy the simple fact of why you own a boat in the first place— to spend time on the water and fish. That being said, one of the challenges you may have with her size is the availability of larger slips. With Gato Blanco being a larger yacht, making prior arrangements for excursions is a smart idea (as you should with any boat).

Owners would have the potential to make many modifications, one of which includes adding additional living space. With a large tender garage, new owners could have the choice to create a relaxing beach club. Imagine anchoring in the Bahamas, opening up the tender bay hatch and having your own private outdoor space; much like an outdoor patio. Or, opt to leave as is and enjoy the immaculate functionality and storage space the tender garage has to offer.

Nick Galati grew up in the family business and understands the dedication it takes to provide unparalleled customer support. He offers his clients a well-versed understanding of sales and brokerage, with first-hand experiences of a licensed captain, avid boater, and tournament angler. Nick is a certified yacht broker and graduate of the Yacht Broker’s Institute.
Contact