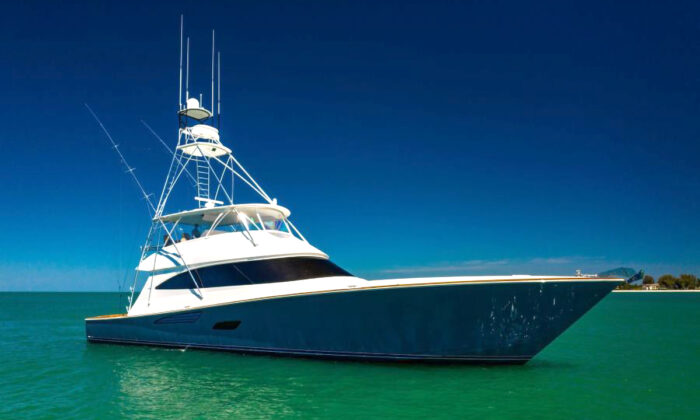 For some anglers, sportfishing is a demanding sport that requires the utmost time and attention— for others, it is simply a way to enjoy the important things in life— like quality time with family and friends. For customer Scott Cooper, his family has always come first. While he enjoys the big moments in life, like recently upgrading to an 80′ Viking Yacht and catching a monstrous blue marlin within the same week—experiencing those once-in-a-life-time moments with his family and close friends are what he cherishes the most. Two days before the Gulf Coasts’ favorite tournament commenced, Scott Cooper’s father —Angus Cooper— took ownership of a stunning 2016 80 Viking Yacht Convertible listed as one of our trades, and sold by sales professional Carmine Galati Jr. While they treasured the 65 Hatteras previously owned for 15 years, they were ready for an upgrade. With Viking Yachts arguably offering the most respectable sportfishing yachts on the market that are second to none, the choice was evident. This late-model 80′ Viking offered it all. Beastly performance, aesthetic beauty, and a proven tournament winner that checked all the boxes. Not to mention, she is pure luxury— offering more than enough space for travel, entertainment, and accommodations for family, friends, and crew.

After closing on the 80 Viking newly named CE— a dedication to Scott’s sister Claire Ellen— just two days before the 18th Annual Emerald Coast Blue Marlin Classic, the battlewagon was delivered from Anna Maria Island to San Destin, FL just in time to fuel up and make the captains meeting. With some of the best teams in sportfishing competing for over one million in cash prizes, the Emerald Coast Blue Marlin Classic is Northwest Florida’s most successful entry into world-class sportfishing. It remains one of the richest tournaments on the Gulf Coast, attracting major players from around the world.

A Catch to Remember Onboard, Scott was accompanied by his father Angus, Ryan Cooper (son 17 years old), Scotty Cooper (son 15 years old), Captain George Crenshaw, Mate Adam McDuffy, Ryan Brock, and Will Beard. Not only was this a great way to spend Father’s day weekend for Scott, but it was also the first time in ten years that his father fished alongside him— and the first time onboard with his grandsons Ryan and Scotty. As the tournament initiated, the first day and a half started a bit slow, but things quickly turned around for Team CE. With his sons letting him take the chair, Scott cast out a live blackfin tuna and shortly after ended up reeling in his 500th career billfish and a catch for the books.

“We Fish for the Memories…”

At the end of the line… a massive Blue Marlin. It took Scott nearly four hours to reel in the monstrous fish and get it into the boat. With this being his fourth ever blue marlin boated in his sportfishing career, Scott could only describe it as one of the most surreal moments in his life.

“We fish for the memories, and this is one that will last a lifetime, and hopefully for generations to come,” stated Scott. “You know, family comes first. To me, big things in life come and go. It’s the little things in life that matter. This was a big thing but the little tidbits of having family onboard and close friends onboard make it that much more special.”

By and large, it was a special day for Scott and the CE Team. At the weigh-ins later that night, the blue marlin tipped the scale at a whopping 512.4 pounds.

All in all, with a newly purchased Viking Yacht, three generations of anglers onboard, and landing a 512.4lb blue marlin this was an unforgettable Father’s day weekend for Scott and the team. When asked what’s next for the CE Team, they plan to fish the Blue Marlin Grand Championship, July 15-19, in Orange Beach, Alabama aboard their new 2016 80’ Viking Yacht “CE”.

We wish the CE team good luck in the upcoming tournament, and a huge thank you to Scott Cooper for sharing this amazing story with us, and the community of sportfish enthusiasts.