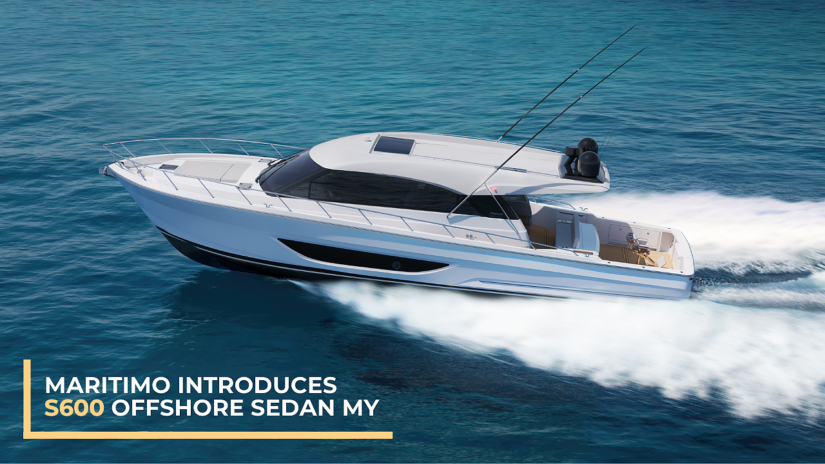 Maritimo Yachts has globally revealed its second model in the innovative offshore series— the all-new S600 Offshore Sedan Motor Yacht. This striking sedan motor yacht is the first in its class within the new generation of offshore models, set to attract global attention as a sensational, true blue-water, long-range offshore cruising platform. The leading Australian luxury motor yacht manufacturer has made extensive investments in design and new model development, which has allowed the brand to construct new models, such as the new S600 and M600, introduced earlier this year. Maritimo enthusiasts will be delighted to hear that in addition to these two models, an additional four more global reveals are in the works before the end of 2021. The all-new Offshore Series represents everything that the Maritimo brand stands for— long-range cruising capability, industry-defining performance and economy, offshore seaworthiness, and high levels of construction integrity.

The straight-shaft drives of the S600 Offshore will be powered by twin inline six-cylinder Volvo Penta D13 800MHP. Paired with Maritimo’s hull and straight-shaft technology, they will deliver world-class fuel efficiency and an excellent operating economy combined with very low emissions. Three fuel tanks also position strategically, keeping weight as low as possible in the hull, adding to stability. The S600 offers a cockpit and hardtop utility space that functions both as a fishing vessel and long-range cruiser. With its specialty open water fishing attributes and long-range, low height, high volume, luxury motor yacht capabilities of inter-continental passage making, the S600 will surely have a broad appeal.

The cockpit features an enclosed transom ideal for fishing or anyone who embraces encapsulated deck space. The reinvented hardtop utility deck has been designed and engineered to be capable of carrying the weight of 350kg davit and tender, freeing up the rear of the boat for greater versatility from the offshore cockpit. Adventuring enthusiasts can also store items such as kayaks, paddleboards, or life rafts on top. Whether you are an avid angler or adventure seeker, the S600 offshore capabilities are second to none.

“Maritimo’s design division has maximized the practical deck spaces onboard the S600 by enabling the often un-used sedan hardtop to be accessed from the upper cockpit deck via overhead hatch and ladder, for the hardtop to be utilized as a utility deck space,” stated Barry-Cotter. The aft deck is highly entertainable, with two distinct cockpit areas. The upper lounging area shelters guests from the elements by the extensive molded hardtop headliner, while the offshore cockpit features an open deck space with heavy consideration of fishing functionality.

The expansive aft entertaining and cockpit areas seamlessly connect via either siding or bi-fold doors to the traditional aft galley, making her an entertainer’s dream. Inside, the S600 takes luxury to a new level with an enormous saloon lounging area. Light and air flow effortlessly throughout, making this space an indoor/outdoor escape. Not to mention, an optional two-stage vista sliding window really brings the outdoors inside. She presents levels of luxury and live-aboard practicality, which will resonate well with discerning owners. Below deck, three staterooms maximize the volume of the hull with incredible free-flowing spaces. Two ensuites with a full-beam king master stateroom, queen offset forward stateroom, and a twin single starboard guest stateroom provides lavish accommodations for up to six. “The S600’s three staterooms feel like they could be within vessel’s much larger in size, thanks to the interior’s innovative floorplan meld with the high volume hull,” Barry-Cotter explained.

“The Maritimo Offshore Series has already garnered an exciting amount of momentum since its reveal earlier in 2021, and the S600 Offshore Motor Yacht will give even more options for our customers,” states Barry-Cotter.

For more information on the all-new Maritimo S600 Offshore Sedan Motor Yacht, reach out to our specialists below.