THE 2019 LOS SUEÑOS SIGNATURE TRIPLE CROWN COMES TO AN END

The third and final leg for the 6th annual Los Suenos Signature Triple Crown Tournament was held March 27-30, 2019. Forty-seven teams came together to participate in one of the most competitive billfishing tournaments in the world. Leg 3 saw a total of 1,234 billfish over the 3-day span, with a grand total of 3,945 billfish released overall!

Nearly 700 guests came together at the Las Suenos Beach Club for the award ceremony. Guests enjoyed dinner and live entertainment during the presentation of trophies, prizes, and checks to the tournament winners. Uno Mas finished first for the tournament with 5,000 points (40 sails, 2 marlins), followed by Big Oh in second on time with 4,900 points (39 sails, 2 marlins), and Hey Chama in third with 4,900 points (44 sails, 1 marlin).

Congratulations to 2019 Series Champion Fish Tank on their impressive win with 17,400 points.

Mark your calendars for the 2020 Triple Crown!

The countdown has begun for the 7th annual Los Suenos Triple Crown Tournament. Don’t miss out on one of the fiercest tournaments, drawing teams in from all over the globe. Save the date for next years series, Leg 1: January 15-18 | Leg 2: February 26-29 | Leg 3: March 25-28.

Galati Yacht Sales is honored to be a Platinum sponsor of the Los Sueños Signature Triple Crown Series. The tournament has been hugely successful not only because of the incredible number of billfish releases but also for the experience of competing with the best teams in the world surrounded by spectacular scenery. “This tournament brings in some of the best fishing teams in the sport,” says Carmine Galati of Galati Yacht Sales. “It is an extremely well-run tournament in one of the best resorts and marina in the world with unbelievable numbers of billfish.” 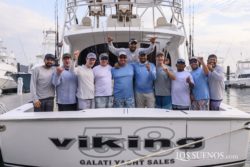 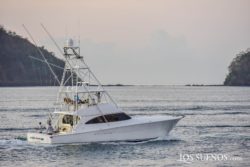 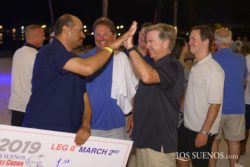 Team Galati, fishing on a brand new Viking 58 Convertible included Captain and Galati Broker Tony Carrizosa, anglers Pat Healey, Carmine Galati, Drew McDowell, John LaGrone, and Erik McDowell, and mates Cristian Siles, Drake Cropper, Jorge Muro, and Fernando Peralta. It didn’t take long for Team Galati to reach second place on the leaderboard and not long after, the releases came in doubles. The team released another 11 sailfish including 4 doubles by the time lines were called in at 4:00 pm. Placing them in first with 3,600 points. Slightly ahead of Big Oh with 3,300 points and Mjolnir with 3,200 points going into Day 2.

All eyes were on Team Galati who didn’t call the first release in until 9:06 am on day two. Two hours after lines in though, Team Galati still held the lead with 3,900 points. Followed by Fish Tank with 3,700 points, and Tarheel with 3,600 points. These three teams passed the baton during the day, moving within the first three spots but not giving any room for another contender to swoop in. A marlin released at 12:37 pm sealed the deal for Team Galati. By the end of Day 2, Team Galati was still number one on the leaderboard. With 6,100 points, followed by Tarheel with 5,500 points and Fish Tank with 5,000 points.

Day three followed the same trend as day one, with a much quicker pace. Nothing was going to stop Team Galati from taking home first place this leg. A marlin could make an unbelievable difference, but they were few and far between this time around. In the end, Team Galati finished first with 81 sailfish and 1 marlin release for 8,600 points, followed by Fish Tank in second with 82 sailfish releases and 8,200 points, with Tarheel finishing in third with 76 sailfish releases and 7,600 points.