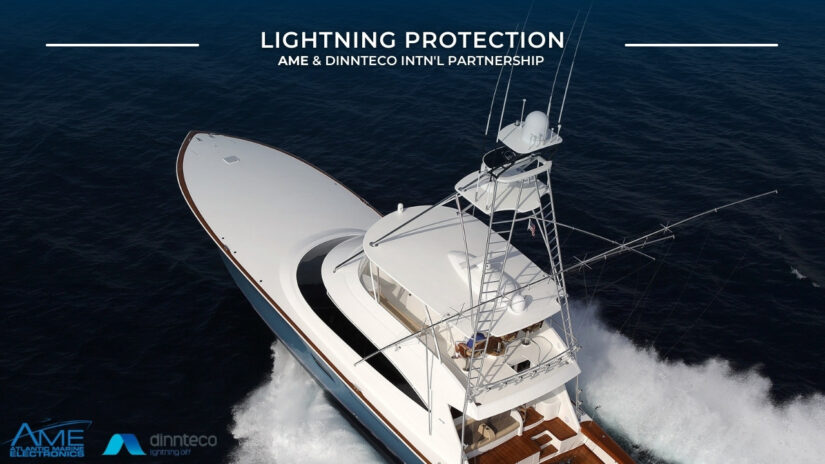 As many boat owners know, lightning strikes can leave behind devastating effects, not only for the vessel but on a personal level, for lost time sorting through the intricacies of repairs and canceled plans. As boat systems become more complex and interconnected, lighting is starting to have a greater impact on the marine industry.

However, Atlantic Marine Electronics (AME) — a Viking subsidiary company — is striking back at the matter. They recently teamed up with Dinnteco International to become the exclusive marine distributor in the United States, Mexico, and Costa Rica of a comprehensive system that helps protect boats against the shattering effects of lightning strikes.

How does the DDCE lightning protection device work?

The DDCE lightning suppressor protects structures from lightning strikes by slowly and continuously neutralizing electric charges in the atmosphere. “The device is constantly collecting the ions from the atmosphere and bringing them to ground while avoiding the creation of an ‘upward leader,’ which would result in a lightning strike,” stated AME General Manager Todd Tally. For Viking sportfish yachts, the lighting protection device will mount to a custom carbon fiber pole on top of the tuna tower. A second lightning suppressor called the DINEOL will be necessary on yachts with outriggers. Both the DDCE and the DINEOL guard against direct lightning strikes. A third element, the DINFIL, which will connect to the boat’s grounding system, protects the vessel against indirect strikes. AME stands as a leader in the design and installation of state-of-the-art navigation, communication, and entertainment for yachts and boats since 2003. The Viking Yacht subsidiary company spent over a year researching lightning protection and has the utmost confidence in the Dinnteco technology. The following Viking demo, an 80 Convertible, will be outfitted with the system, along with a 68 and 72 Viking on the production line, per the owner’s request.

AME will be installing the lightning protection system on new Vikings in its role as a master dealer. Additionally, their interest is facilitating relationships with other companies, so they too can become dealers of the product and technology. For more information, reach out to our Viking specialists (833) 701-0472. When looking to purchase a used Viking or new Viking Yacht, turn to the team with unparalleled experience and Viking-based knowledge. Galati Yacht Sales has been the exclusive dealer for Viking Yachts on the Gulf Coast, including Florida, Alabama, Texas, Cabo, and Costa Rica, for more than 20 years. In addition to our Gulf Coast and international yacht brokerage locations, we recently expanded our Viking dealership services to California, Washington, and the entire Pacific Coast.

Our Viking Specialists not only comprehend the brand, build process, and history, but they also live the lifestyle to help you determine the best features and options for your boating needs. Since 1970, we have been committed to exceeding customers’ expectations. Whether purchasing a yacht or selling, contact us today to get started on your yachting journey.