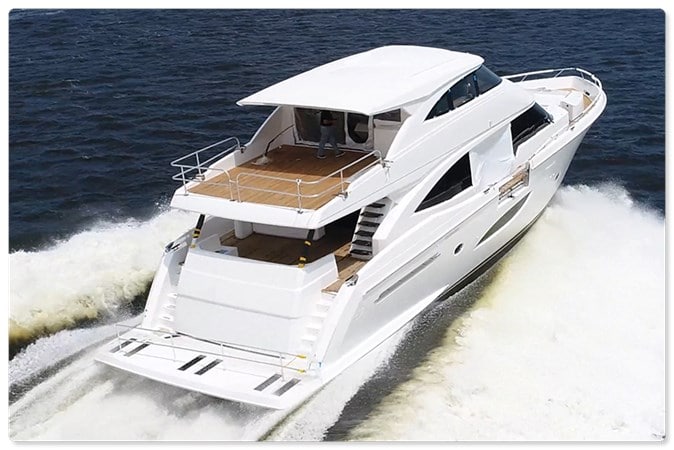 Largest vessel in the history of Viking Yachts – 93 MY

With each new model, Viking’s mantra to “build a better boat every day” could not be more accurate. The thought, craft and expertise poured into the development of each vessel makes their hashtag #LeadingTheIndustry truer today than ever before. The 93 Motor Yacht is the largest vessel in Viking History, a momentous achievement and a truly magnificent execution.

This tri-deck motor yacht has the space and amenities of a 115-footer and the impeccable performance of a Viking. With five-staterooms, seven-heads, a private crew quarters for three, a huge country-kitchen style galley, two salons and two aft decks with outdoor bars and seating, Viking meets a new expectation of defining “luxury”.

“What I like about this boat is the tremendous amount of room you have aft of the forward galley on the main deck and the bridge on the upper deck,” says Viking President and CEO Pat Healey..

At around 12 knots, the range reaches about 730 nautical miles. “If you’re out on the water and get the urge to head to Bermuda. You’ve got the legs to get there,” Pat explains. During a sea trial that took place early August, the 93 MY’s numbers went through the roof. Topping out at 27-plus knots with a cruising speed of 23.5 knots. “I’m very pleased,” Pat shared after the sea trial. “We nailed it”. Preliminary figures show that the 93 MY has a range of about 450 nautical miles. That’s from 20 to 23 knots with 12-cylinder MTU diesels (1,945MHP).

She will have her world premiere at the 2017 Fort Lauderdale International Boat Show this coming November but will be available for preview at the Viking Sea Trial Event in September. The Viking 93 Motor Yacht is by far the first of its class. It awaits its debut to show just how magnificent it truly is.

Interview with Pat Healey on the 93 MY