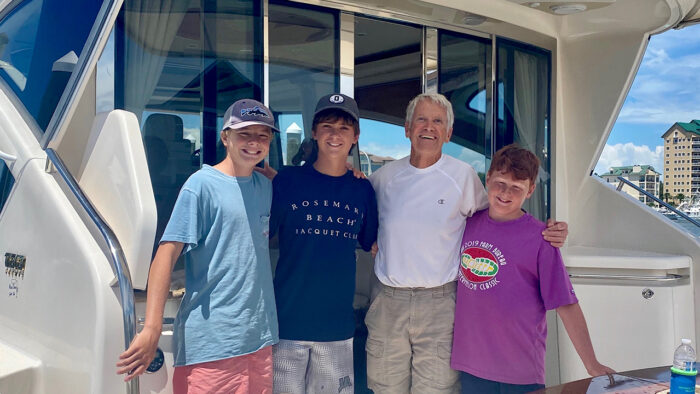 Some of our fondest memories as children are the things we did, and the places we went with our grandparents. When we heard about the amazing west coast adventure long-time customer, Larry Edwards took with his three grandsons (14 & 11-year-old brothers along with 12-year-old cousin), we could not help but share their amazing journey.

Larry and his wife, Pam have been avid boaters for over 30 years. They became acquainted with Galati Yacht Sales in 2006 when they moved up from a 31 to a 43 Tiara through our Destin location. They spent the next 5 years enjoying the boating lifestyle, and in 2011 decided to return to GYS to purchase their current vessel, a 58 Tiara Sovran named HAPPY OURS.

After learning about his grandsons’ shortened school year and list of summer event cancellations, Larry decided it was time to take them on a boat road trip they would not forget. Not to mention, it was the perfect opportunity to show the boys’ the ropes of boating. So, that is exactly what they did. They began planning their trip down the west coast of Florida from Destin to Anna Maria Island and onto Longboat Key.

Of course, with all boating adventures, the weather must cooperate. For Larry and the boys, the critical portion is crossing the big bend area from Apalachicola to Anna Maria Island. A 200-mile all-day trip that is as much as 80 miles offshore. Scrambling to leave a day earlier than planned, they made the 6-hour run from Destin to Apalachicola. Arriving in time to refuel, spend the night, and prepare for an early departure. The boys fished from the boat and dock catching catfish, a stingray, and lots of grass, but having a great time. Up at first light, they discovered a problem with the genset. After a short delay to replace the impeller on the Genset, the 9-10-hour trip was smooth sailing to Galati’s docks at Anna Maria Island. The boys all took turns at the helm learning about plotting a course, checking gauges, and keeping watch. Larry was excited to teach the boys about the rules of the waterways and how to operate a larger boat. Of course, following in the footsteps of their grandfather, the kids caught on fast. Before they knew it, they were docking up at Galati Yacht Sales marina on Anna Maria Island.

Who said Learning Can’t Be Fun

After securing the 58 Tiara in the slip the boys continued their boating adventure with a lesson in routine maintenance. As every boater knows, it is important to clean and wash your boat after a long day at sea due to the salt and sun exposure. On the docks at AMI, the boys learned more in-depth detail about docking, washing the boat, checking fluids, etc. While cleaning the boat— boys being boys, a spray and suds war began, and the laughs commenced, a precious memory of Larry’s. Once the boys caught their breath from laughing, they finished up washing the boat and were ready for their next escapade.

With no tender aboard the 58 Tiara Yacht, they brought along a 12-foot port-a-boat that folds up and was stored on the swim platform. Without wasting any time, they had the 12-foot boat set up, engine and all— and off they went in search of premier snorkeling and fishing spots on Anna Maria Island. “It’s a great place to visit…”

During their stay, they got plenty of snorkeling and fishing in, while also making time to explore the quaint island; making pit stops at all the local favorites. Larry also got to catch up with the Galati Family that he has come to know well over the years. He even had some service performed while in Anna Maria at the 5-Star Service Yard run by Mike Galati. “It’s a great place to visit and we want to thank everyone at Anna Maria for the great service and hospitality. The boys learned about docking, washing, checking fluids, navigation, etc., and they didn’t want to come home,” stated Larry.

With endless adventures and new sightlines, it was hard to pick a favorite memory, but Larry did recall an interesting find during their stay in Longboat Key. One day, during the boys’ many snorkeling voyages aboard their port-a-boat, they discovered a large deceased sea turtle. They told Larry during lunch and he began calling around to report the news. Being a Saturday, the Fish and Wildlife Service line went to a voicemail as it did one for Mote Marine Research Laboratory. Leaving a couple of messages, they did not expect to get a return call, but to their surprise…15 minutes later, the phone rang.

Mote Marine returned the call and began asking the whereabouts of the sea turtle, and if the boys had taken any pictures. Wanting to be helpful, the boys eagerly went back to the spot where they found the turtle and captured picture evidence to pinpoint the location. While still out and about, the boys saw an incoming vessel about 45 minutes after their conversation. To their surprise, it was a Mote Marine boat coming to recover the deceased sea turtle for research. The grandson who sent the pictures, recently received a text from Mote reporting what had happened to the turtle they discovered that day. 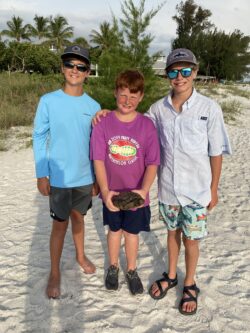 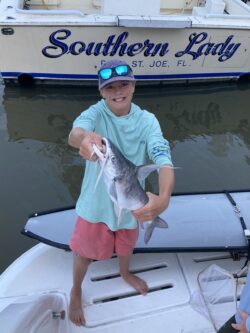 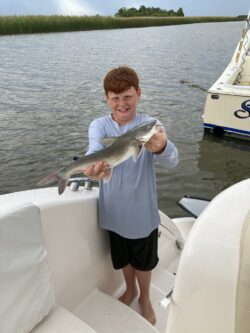 Leaving Longboat, they stopped for a history lesson/snorkeling adventure at the historic Egmont Key park and then returned to AMI. With approaching weather from Tropical Storm Cristobal, they needed to cut the trip short a few days. From AMI they went to Tarpon Springs to shorten the return crossing back to Apalachicola. The crossing was smooth and after one last night in Apalachicola, they returned to Destin making it an 11-day 10-night West Coast adventure. Talking to Larry, you could tell just how special this trip was to him. Not only did they get to spend priceless quality time with one another, but Larry got to teach the boys about boating and successfully raise up another generation of boaters in the family. We love to hear these amazing stories from our customers, and we thank Larry Edwards for sharing his incredible West Coast Adventure with the boating community.

When asked about future trips, Larry plans to take his three granddaughters on a boating adventure next. His plan is to take granddaughters’ (12,10,7) on a trip for a few days later this summer.

“We love the Galati Rendezvous…”

Larry and his wife, Pam have also been involved in our Galati Rendezvous throughout the years. He and Pam have been on numerous Galati trips including the Abacos, Key West, Blue Angels, and many others. “We love the Galati Rendezvous”, stated Larry. “That’s one of the ways we were able to build such a great relationship with the Galati family over the years. Several of our friends have retired from boating recently, so we always look forward to your Rendezvous and getting to meet new people who share a love for boating.”

For Galati customers who are interested in our Rendezvous, we are excited to announce the new dates for our Key West Rendezvous, August 10-16. We are eager and fortunate to be able to spend time with customers in tranquil locations through our Rendezvous trips. These trips are planned and coordinated by our team and captains and feature exciting pit-stops along the way. We look forward to the schedule of events for our upcoming Key West Rendezvous outlined below.