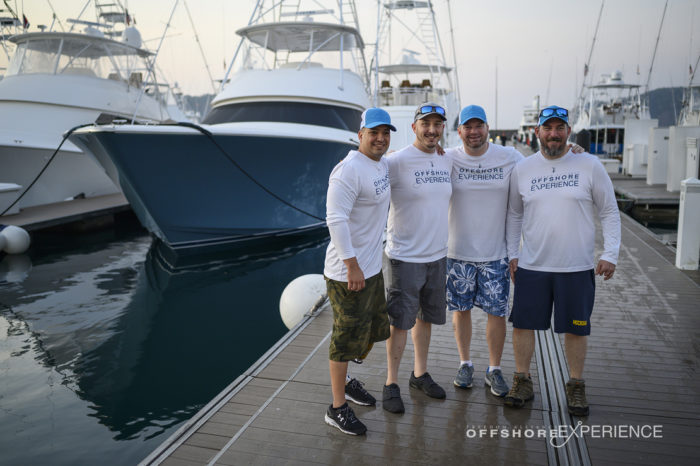 Freedom Alliance, founded in 1990, has gained a reputation among combat veterans for providing “once-in-a-lifetime” events to veterans as a tangible expression of appreciation for their service. For over a decade, their recreational and experiential trips have made an impact on veterans who fought honorably overseas. Recently several Marine veterans were hosted in Los Suenos, Costa Rica and treated to some offshore fishing thanks to generous donations of fishing yacht owners.

Galati Yacht Sales has contributed to this fantastic organization in the past including the “American Heroes Getaway” which was conducted in 2008 in Panama City, Florida and Team Galati generously donated a few fishing days to Freedom Alliance. In 2013, Freedom Alliance, with the help of the generosity of fishing yacht and condo homeowners, the veterans enjoyed an amazing trip to Los Suenos.

The Start To An Unforgettable Experience

This year, February 22nd marked the beginning of another five-day event accommodated at Los Suenos Resort and Marina in Costa Rica. The Four Marines who all fought in the Iraq war, arrived for an adventure on the sea … chasing billfish aboard a Viking 55 Yacht, “TAG TEAM II.” Read about their amazing experience, kindly provided by Mr. Pepper Ailor from the Freedom Alliance organization, below.

The reactions are always the same. Phones come out to take photos, and then they lean on the rails, breathe the tropical scents deeply, and stare at the condos, villas, and marina spread beneath them under a colorful sunset. That reaction is the reason we intentionally make the condo at the top of Los Sueños resort their first stop. This activity is the first in a five-day event for veterans who fought overseas and have been changed by war – sometimes physically and always in matters of the soul. It’s the Freedom Alliance Offshore Experience, and it’s improving lives.

Three of the marine combats hailed from Chicago – Mike, James, and Richard – all Marines who had fought in Iraq. Another Marine, Jacob, traveled from south Texas to attend. Their collective experiences went beyond service in Iraq, though. They all have suffered from burdens carried into their life after war: nightmares, negative thoughts, sleeplessness, survivor’s guilt, high alertness….the list continues.

The men were treated to a day of offshore fishing on the 55’ Viking “Tag Team II”. John Sercu, the boat owner, is also a veteran and the guys were put at ease from the start when Richard spotted the Army Ranger tab sticker on the window of the salon and said, “This is my people!” Captain Victor Julio and the team warmly greeted the veterans and welcomed them onboard. It was the first time these men had been offshore fishing. The boat quickly pulled out of Herradura Bay, and we were on our way to the fishing grounds!

Exactly eight minutes after putting the lines in, the mates Kris and Hector had hooked our first sailfish. Jacob was the first to react and grab the rod to the cheers of his new friends. Sergeant Jacob De La Garza is a taciturn and humble man – but don’t be fooled, he is all warrior. He served on three combat deployments to Iraq and one to Afghanistan. Jacob was on the ground during Operation Phantom Fury, the battle to take the city of Fallujah. It was there that he lost close friends and was received a commendation medal for valor and a Purple Heart Medal for wounds received during the battle. Seven years later, he was wounded while serving in Afghanistan. Losing a leg to an enemy’s explosive device and receiving a second Purple Heart.

“I start trying to reel, but it’s pulling and the lines pulling…it felt like it took almost the whole reel,” said Jacob. He went on to fight the fish for another five minutes, which felt much longer to him. He was stunned by the colors of the fish, and it’s size. “It was way bigger than me!”

The next fish was a smaller yellowfin tuna, caught by Richard. Richard and James were teammates serving in Iraq together. Richard was a machine gunner, and James served as a Scout Sniper. In 2004, they were wounded in a blast together that led to a partial amputation of Richard’s hand and peppered him with shrapnel. James recalls the agony of having to watch his friend leave the battlespace bloodied and knowing they wouldn’t be working together anymore. The wound forced Richard into early retirement and James went on to serve another deployment in 2008 into 2009. Richard and James share a bond only forged through combat experience.  They felt this journey to Costa Rica was another blessing they could share together.

More sailfish were hooked, and the rods passed. When Mike started reeling his fish in, he glanced over his shoulder at the three cameras filming every moment. Mike joined the Marines to serve as a warehouse clerk, but the Marine Corps will determine its own needs and reassigned Mike to serve as a security gunner on a bomb technician squad. He served on the same deployment with James in 2008 to Iraq – deployment to the Sunni Triangle of Death.

Around lunchtime, the mates cut up, and Jorge prepared the tuna to eat as sashimi. It was a special treat the men ate up quickly. Mates Hector and Kris were in sync so much, and it reminded Jacob of his Marine team. “They already know what the other guy is going to do without saying a word.” This is a common observation from combat teams that have fished on Freedom Alliance trips. They understand the technical aspects that become habits, so when the adrenaline hits in moments of high excitement, no beat is missed.

End of Day One:

AAt sunset, Tag Team II pulled back into Los Sueños Marina. In all, the men had an exhausting day. Reeling in a total of 28 sailfish! The next morning, they arrived back at the marina at sunrise to board “Mjolnir”, a 70’ Viking owned by Jim Smith and captained by Dave Harris. Jim, Dave, and the team greeted the veterans as they boarded the vessel. Because the men had such a successful day with Tag Team, we decided to let the guys learn to hook the fish themselves. After getting to the fishing grounds, Jim went up to pilot the boat while Dave descended into the cockpit to teach. Dave, a native of California, is a natural teacher. Aided by mate Trin Schloot and angler Johnny Bankston, the troops started catching their own fish!

Throughout the day, the men joked with each other. Feeling entirely at ease and comfortable in their new role as an angler. We had over 25 bites and caught seven sails….remember, this was only their second day of offshore fishing. And before heading home for the day, Mike checked off an item on his bucket list: swim in the ocean with no land in sight.

Jimmy Kitchell of Costa Cat Cruises donated his catamaran tour to beautiful Tortuga Island. The boat leaves from Los Sueños Marina, and it is a 45-minute cruise to the azure waters and white sands among the palm tree grove of Tortuga. Although the men took advantage of snorkeling while there, the purpose of the visit was to conduct several discussions and exercises developed by Dr. Ed Tick. This was to promote a healthy inward reflection on how to carry their warriorhood into this phase of life.

By acknowledging the burdens they carry from war, not as a sterile pathology like “PTSD” which strips meaning from their suffering, we can guide them into a new way to carry their identity with honor and share their burden. The solitude, serenity, and picturesque beauty of Tortuga is a perfect setting to balance the topics associated with war: loss, grief, violence, destruction. The talks are positive, though, expressing their warrior legacy in terms to promote well-being. When the Costa Cat staff gathered us to return to the boat for the departure home, their spirits were high.

Each evening during their Offshore Experience, they were treated to a meal by one of our supporters. They were asked to share their sentiments on what our veterans mean to them. John McLean, a resident of Los Sueños, treated them to their first meal in Costa Rica at the resort’s Al Fresco where they saw their first sunset. The next night, Captain John LaGrone hosted the men in his home where his wife Vanessa cooked them a traditional Costa Rican meal. Following that night, long-time Freedom Alliance supporters Bob and Judy Yanover hosted the men in their home to a night of fine Cuban cigars and a hearty meal of steak. The last night was hosted in one of the condos donated by Gerald & Virginia Lindholm where the men were lodged. Los Sueños condo owner Bob Schwegler catered a meal as the men related adventurous stories from the past four days. Marine wildlife artist Steve Goione, who was at Los Sueños for the upcoming Triple Crown Tournament, stopped by to give them a special gift. Tag Team owner John Sercu had commissioned a painting of the Tag Team boat and gave Steve permission to give each veteran a print personalized by the artist. They were blown away.

From their lodging, meals, and activities to the golf carts they rode (thank you Gato Gordo and Gene & Patsy McNichols); the Tunaskin Aquatic Apparel “Offshore Experience” fishing shirts; the Costa Del Mar sunglasses, shirts, and hats they were given; and the letters from our supporters – it all added up to a big message that our country and people love them and want them to thrive.

“I came here expecting a fishing trip, but it was much more than that,” said Jacob just before departing for home. For men who have witnessed the violence and horrors of war, we are proud to offer them this moment of peace on their path to becoming elder warriors.

You can support this cause by visiting www.faoffshore.com and following the support/donation link in the navigation bar. 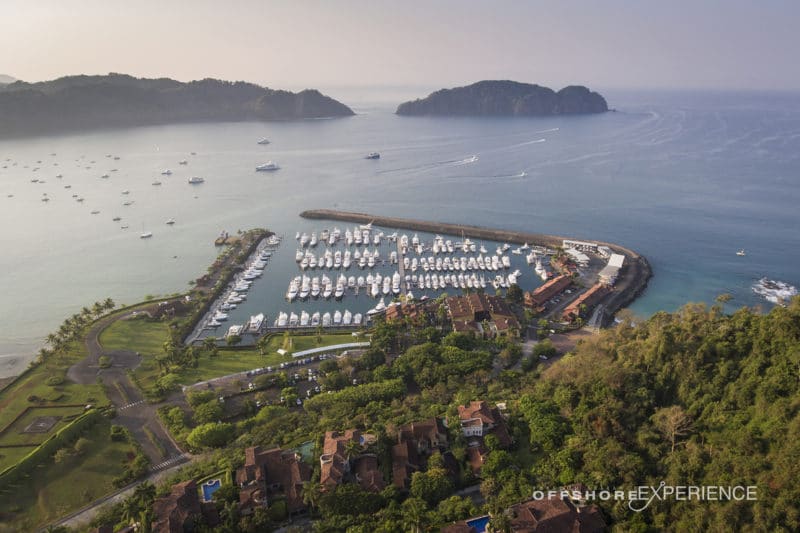 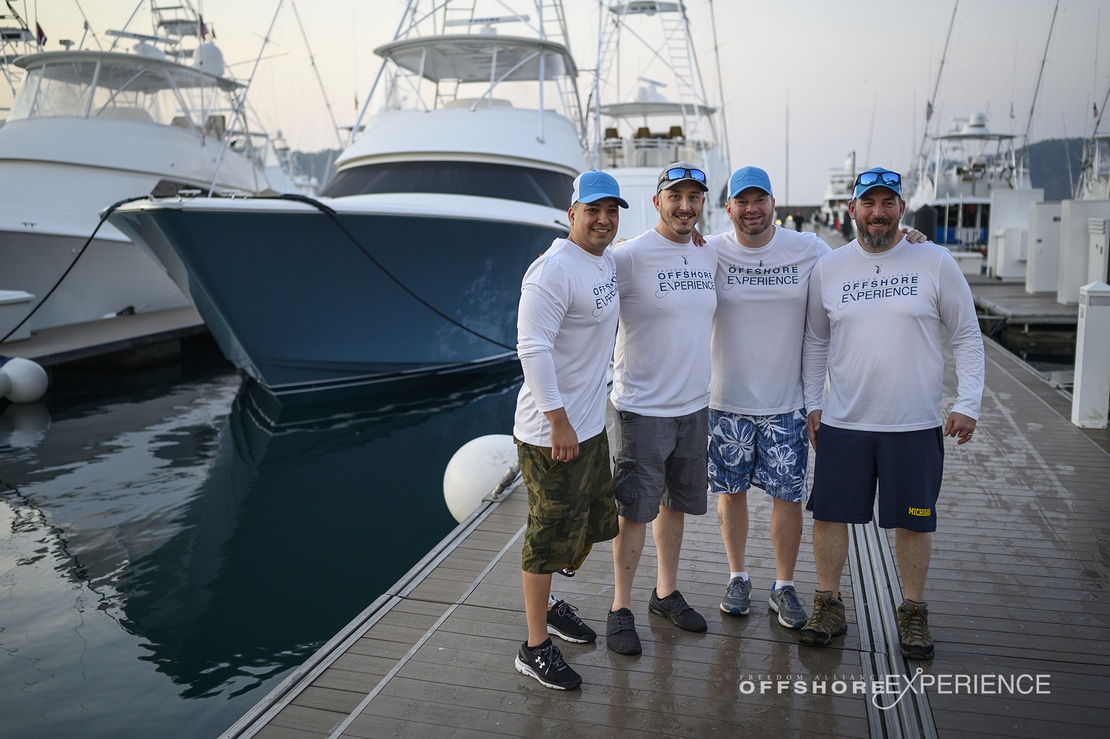 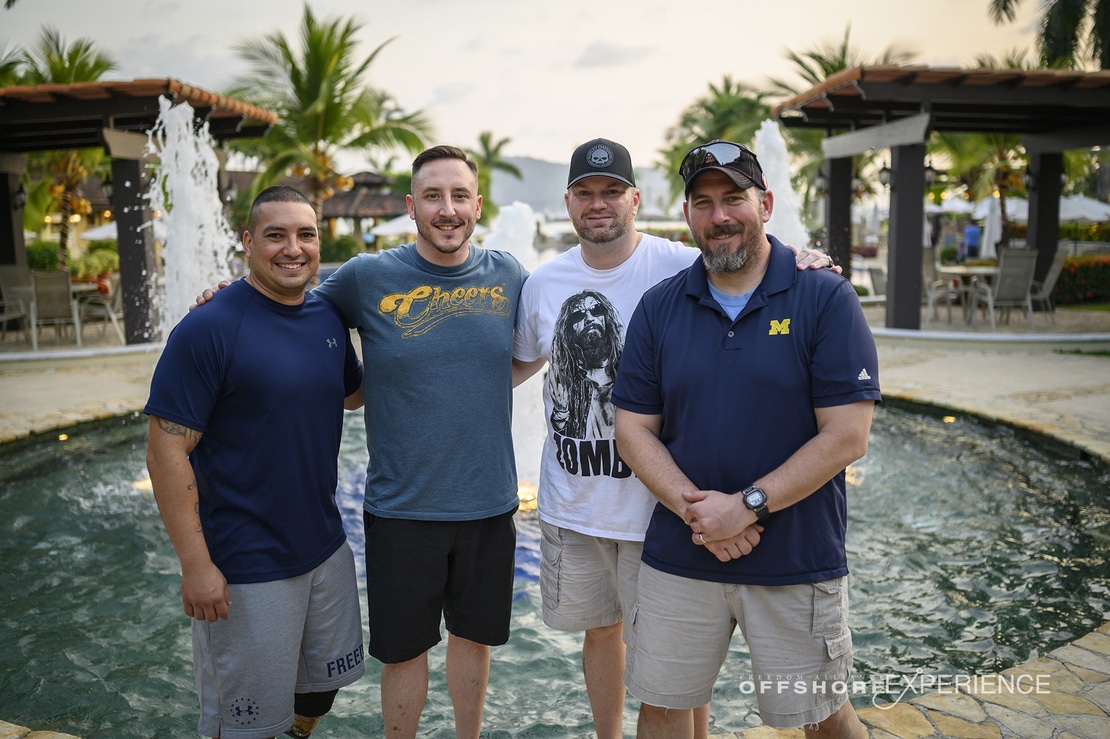 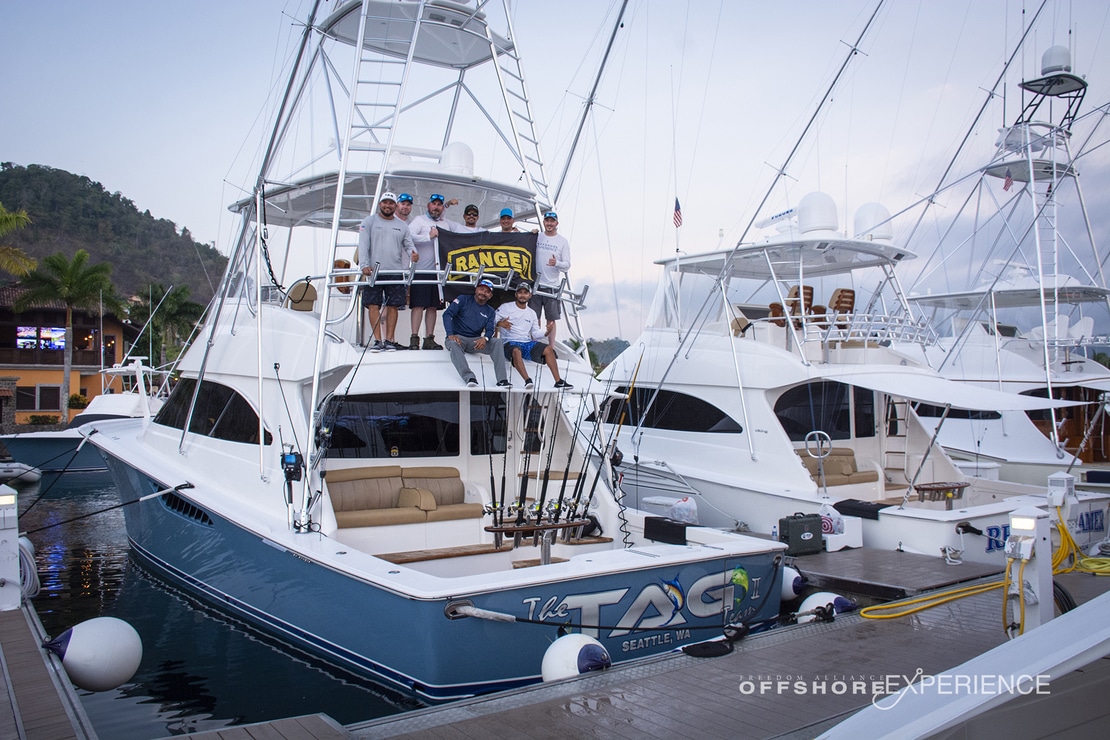 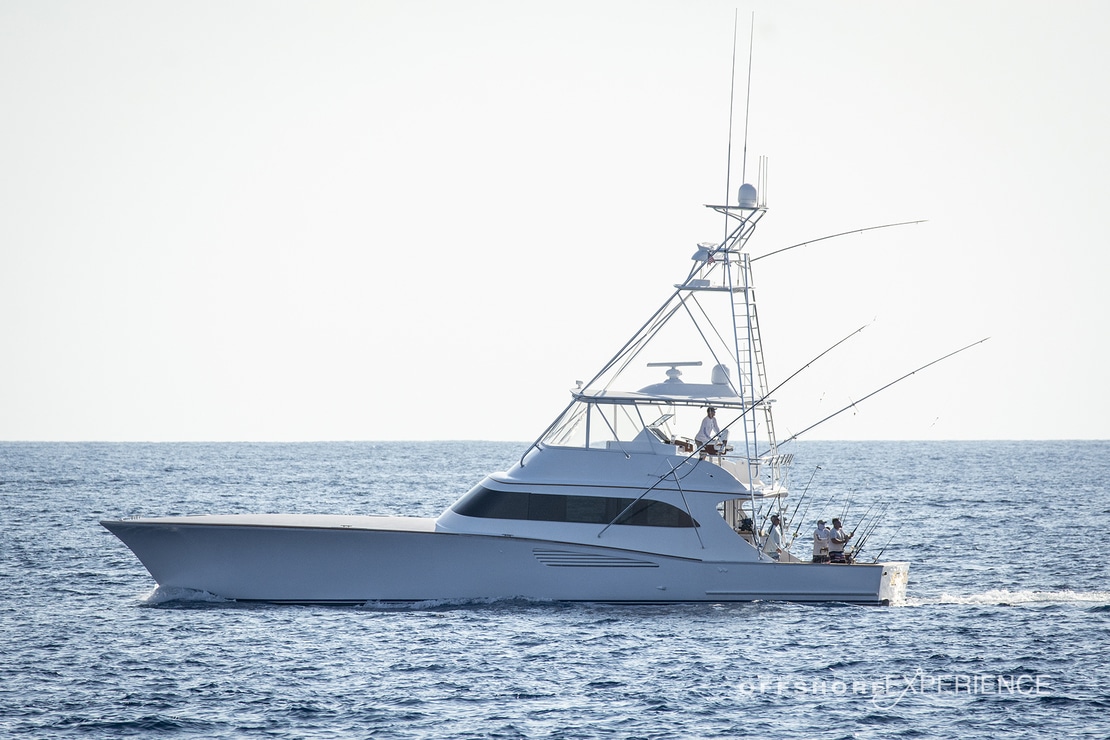 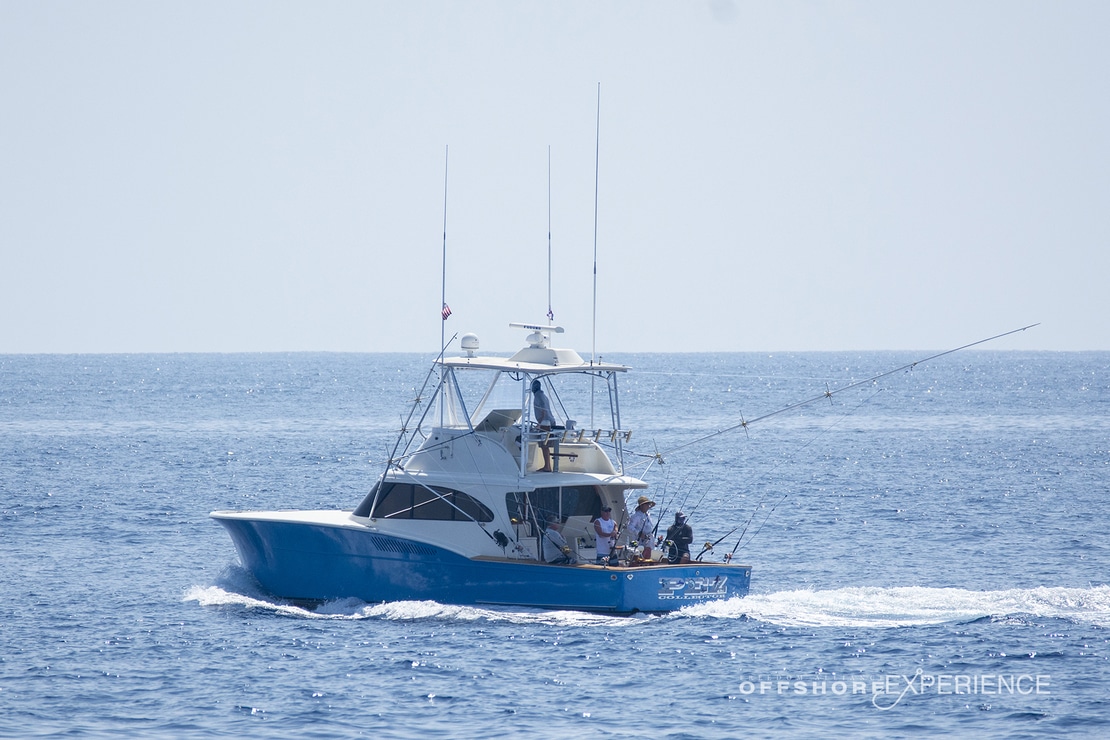 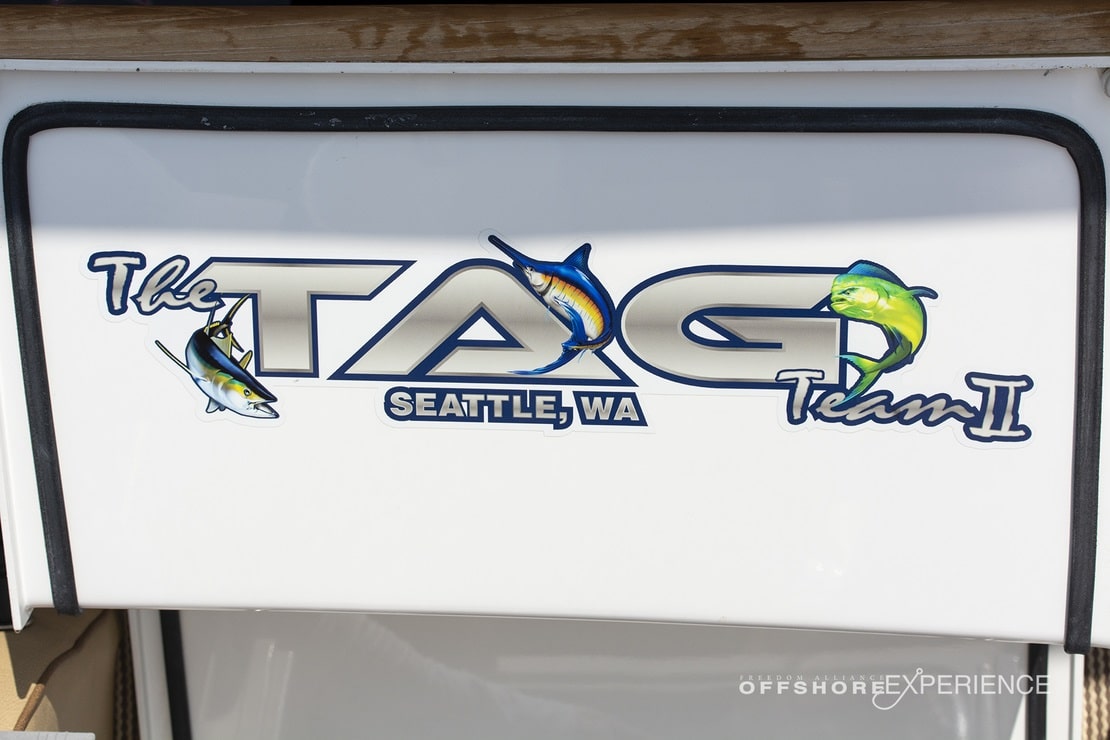 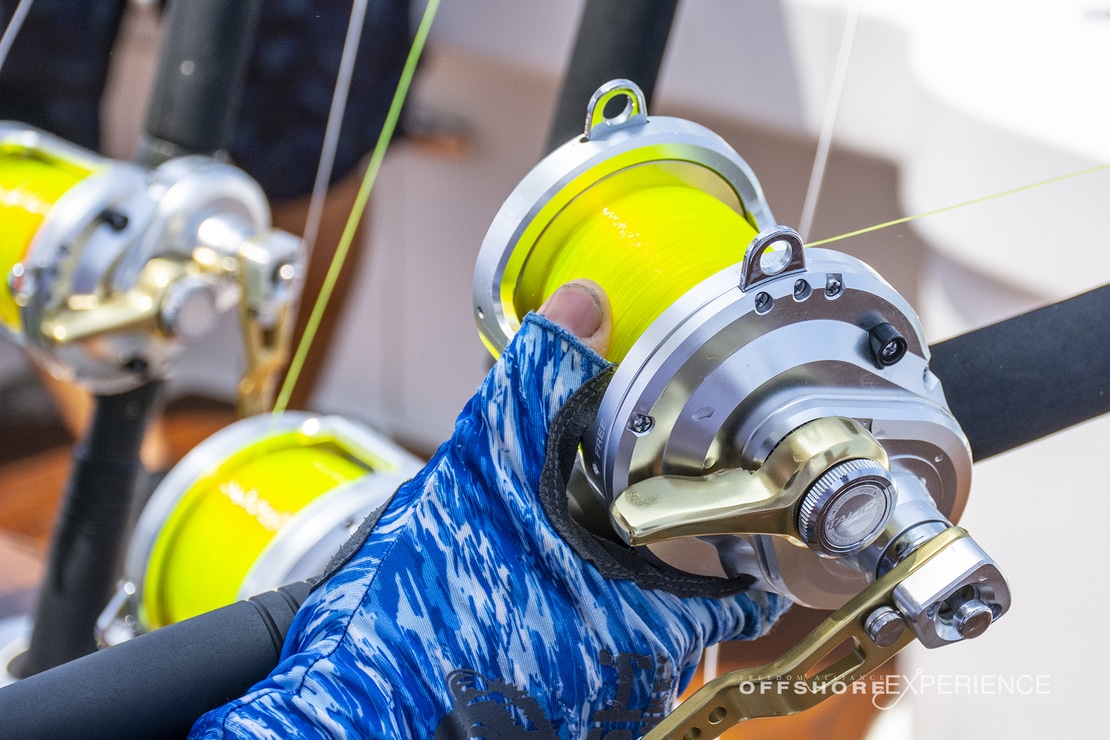 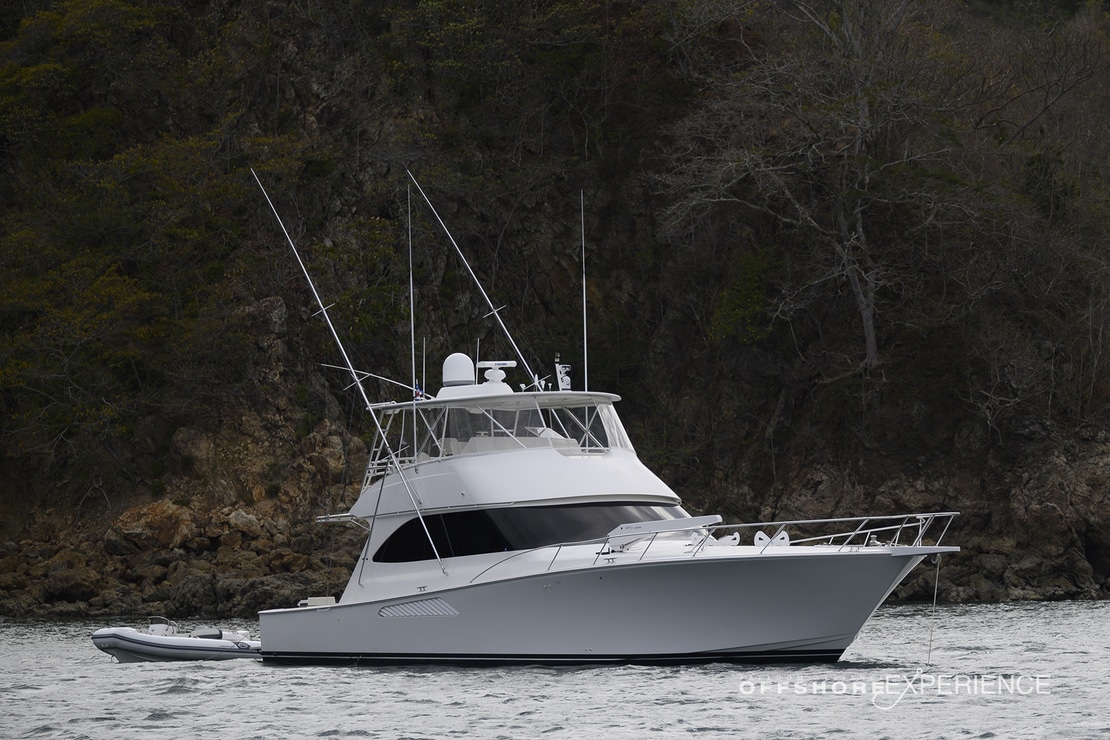 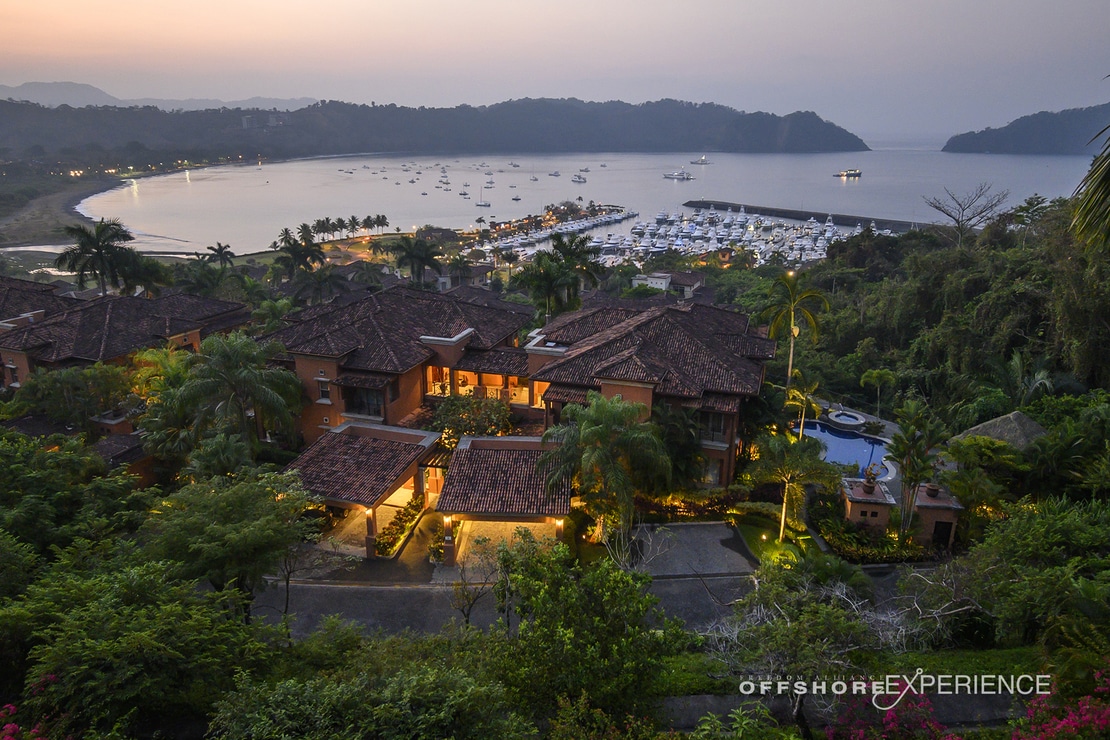