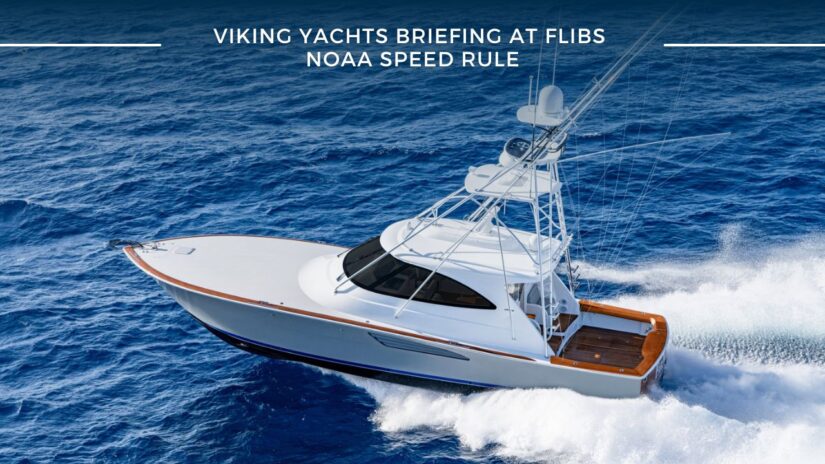 Viking Yachts, leading sportfish manufacturer, and other marine industry front-runners are planning to hold a special press conference at FLIBS to convince the National Oceanic Atmospheric Administration (NOAA) to retreat from the recently proposed vessel speed restrictions — as doing so could have severe negative impacts on the East Coast boating and fishing communities.

The proposal to the North Atlantic Whale Vessel Strike Reduction Rule, published on August 1, 2022, would broaden the current 10-knot limit to include boats 35 feet and bigger (down from 65 feet) and expand the slow zones to essentially the entire Atlantic Coast as far as out 100 miles from shore. The briefing will take place at the 2022 Fort Lauderdale International Boat Show on Friday, October 28, at 9 a.m. at the Viking display at the Bahia Mar Yachting Center on D-Dock. Pat Healey, President, and CEO of Viking Yachts, previously stated to the NOAA, “Viking Yachts is completely sensitive to the status and outlook of the North Atlantic right whale population. The health of the ocean and all its life is of paramount importance to our company and boat owners. However, we believe the magnitude of the proposed rule warrants careful consideration to ensure that a practical, enforceable, and realistic plan is put forward to address the right whale population.”

John DePersenaire, Director of Government Affairs and Sustainability for Viking Yachts, also stated, “The proposed rule, as written, would be the most consequential maritime regulation that we have ever seen imposed on the recreational boating and fishing sector.” The NOAA is proposing changes to the Right Whale Vessel Strike Reduction Rule, implemented on December 2008, to further reduce the likelihood of mortalities and severe injuries to endangered right whales from vessel collisions, which are a leading cause in the species decline and mortality rate. The NOAA stated in the proposal, “changes to the existing vessel speed regulation are essential to stabilize the ongoing right whale population decline and prevent the species extinction.”

The initial rule came into effect as the species was severely depleted by commercial whaling, and despite protection from commercial harvest since 1935, have not recovered. While the whale species did show two decades of growth between 1990 and 2010, the species has since been in continuous decline, with a recent population estimate of fewer than 350 remaining. According to the NOAA, entanglement in fishing gear and vessel strikes are the two primary causes of right whale mortality and serious injury.

The proposed rule would: (1) modify the spatial and temporal boundaries of current speed restriction SMA areas (2) include most vessels greater than or equal to 35 ft (10.7 m) and less than 65 ft (19.8 m) in length in the size class subject to speed restriction, (3) create a Dynamic Speed Zone framework to implement mandatory speed restrictions when whales are known to be present outside active SMAs, and (4) update the speed rule’s safety deviation provision. Considering the submission was published without any engagement with the boating and fishing community, key marine leaders are taking a stand. The National Marine Manufacturers Association, International Game Fish Association, BoatU.S., Guy Harvey Ocean Foundation, The Billfish Foundation, Recreational Fishing Alliance, and others will be in attendance at the press conference with Pat Healey to request the NOAA stop the rule’s advancement until reasonable alternatives are established to protect the right whale without crippling the marine industry.

For now, the NOAA has extended the public comment period to October 31. “Now that we have the extension, we really need to turn up the volume and make sure our voices are heard,” stated Pat Healey. “Everyone needs to rally – yacht clubs, marinas, fishing clubs, charter boat associations. This is a huge deal that not many people know about.”

How You Can Make a Difference

The community can voice their concerns about the amendments to the North Atlantic Right Whale Vessel Strike Reduction Rule via the Federal eRulemaking Portal. You can also provide comments through various boating and fishing groups, such as the National Marine Manufacturers Association’s Boating United group and the International Game Fish Association. For an in-depth analysis and better understanding, listen to the Power & Motoryacht podcast on the subject or read the Press Release by Viking Yachts.

Boating Safety Guideline for Predeparture & On the Water
Boating In Bad Weather — What You Need To Know
Filing a float plan before embarking on a boating excursion
Ditch bag ideas for boaters
Protecting Florida Marine Life: Boating 101