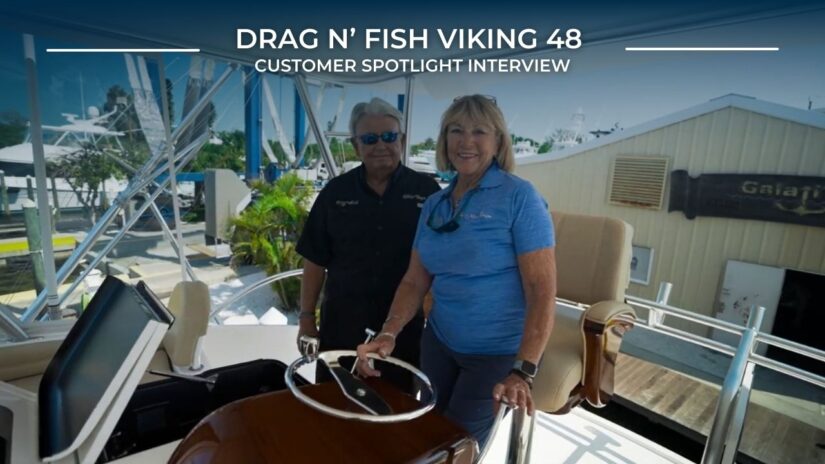 Have you ever wondered how people come up with boat names and why they choose them? Every owner has a story that gives us a little glimmer of insight into who they are and the significance behind the boat’s name. This is Roger and Karen Comstock’s tale. They recently took delivery of their new Viking 48 Convertible, Drag n’ Fish, at our Anna Maria dealership and shared a great story of fishing, drag racing, and friendly competition. Watch the interview below of our customer spotlight — Team Drag n’ Fish.


Why the name Drag n’ Fish?

Karen: “When we got our 72 Viking, we were looking for a name that kind of showed us as opposed to any old name. Because Roger is Norwegian, we were trying out mermaids and Nordic names and stuff like that. All of a sudden, I thought: what are our two favorite things we like to do? We like to drag race, and we like to fish — Drag n’ Fish — so that became the name. And there is a dragon fish, which I finally looked up…but the name fits perfectly. The G has flaming header pipes, the D has a starting tree from drag racing, and obviously, there is a fish in there.”

What were you interested in first, cars or boats? Roger: “I think it was different for both of us. For me, it was cars being 16-17 years old and getting my first car. My father fished, but I didn’t fish so much with him. With her, she fished with her father all the time at a very young age. They had a home on Catalina Island, and they would fish off the island for White Sea Bass and occasional striped marlin. So I think it would be fish for her and cars for me.”

How many fishing tournaments do you attend each year?

Karen: “I counted it out, between 5 and 7, with the competition between us and friends. It started first in Mexico, and then we branched down to Costa Rica, and we will pick up a few others here and there.”

Do you have a favorite tournament or location you like to fish in?

Roger: “Well, it is pretty different. Usually, in drag racing, when you have an opponent, it is selected by a ladder, and you decide who has lane choice. You flip a coin, and that is how you decide on lane choice. When you flip the coin, somebody will say, (well, I’d like the left/right lane,) my response is: I’d like the one with the win light.

It is the same thing in fishing. We like to fish in Costa Rica. It is a completely different fishery than in Mexico, and we also like very much to fish in Mexico.

We go to a roosterfish tournament there that has been going for 56 years, and we have fished probably 15-16 years of it. I have won it once, but she hasn’t won it yet. And then there is another billfish tournament right after it by the tournament angler association. I won last year, she won this year, and I came in fourth, and we probably won’t get invited back now.”

Karen: “I got to be the first woman that has won that tournament in its 35-year history. I was also one of the first three women to fish in the Masters, which is super cool.”

Karen: “It is challenging, but it’s fun. From a female standpoint, you are just one of the guys, which is all I really want to do. I don’t necessarily want to do hook and pass or any powder puff stuff. I was always one of the guys growing up in an almost all-boys neighborhood, and I just want to do better.

As a friend of ours told us once, ‘you may never win that tournament because there are some excellent fishermen there.’ But, each time I fish with each of those guys, I get a little morsel of information and put it to use, and I become better. So at least I make them worry a lot. And I’m usually always in the top half, so that is good. I am becoming better and better, and maybe one day, I’ll beat them.

Roger: “She is capable of winning it. As Carmine knows, he has won the tournament, it is a lot to do with your luck, the boat draws (if you have the right boat and are in the right place at the right time), and you don’t miss fish. Those three come together to either allow you to win or not.”

Is there a competitive nature between you two? Karen: “You can’t have a cup of coffee or make it to the bathroom without it being a competition. So yea, it always has been and probably always will be.”

Roger: “And, that is whether we are racing or fishing. We race in different classes because we didn’t want to be cutting each other’s knees off. But at the end of the day, we compare each other on how we do in our classes.”

Karen: “And it makes you better. It makes you want to get that one little step ahead.”

Roger: ”I think that on the Masters, she is capable of winning the masters, and I may be too, but for both of us, it will make us better fishermen. To not be able to use the boat, it’s you and the fish.

This last year Carmine, Pat Healey, and the group got together and realized that the blue marlin were so prolific down in Costa Rica, and the sails were limited that they opened it up to Blue Marlin. Now, imagine catching a blue marlin without backing down in 10 minutes or less, and you lose points every minute. She had a slam and missed the grand because the black broke the line. But, we were 30lb test, dead boat.”

Karen: “He broke the leader, not the line.”

Roger: “Sorry, did you tie the leader?”

Karen: “I did not tie the leader.”

Roger: “okay, fine. No, there is no competition here…no, perfectly normal.”

Since 1970, our core mission has been to exceed customer expectations and provide an exceptional boating experience, whether buying or selling. The Galati’s are a boating family and understand firsthand the joys of boat ownership and being out on the water. Their love and passion, combined with our team of dedicated yachting professionals, provide an exceptional experience for our customers. Read our customer testimonials for more insight into how we live up to our mission each and every day.