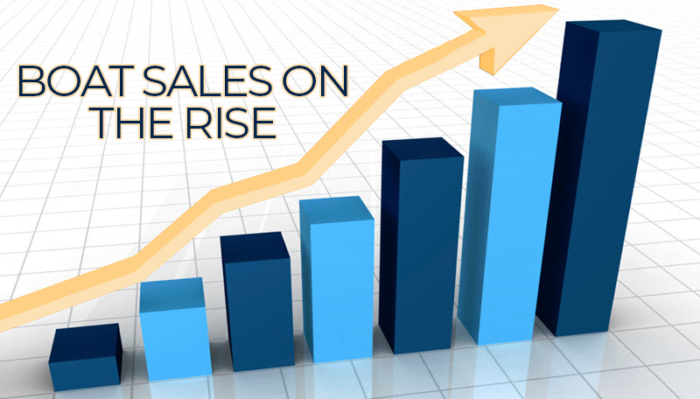 Boat Sales on The Rise, Highest in Decades

According to the National Marine Manufacturers Association (NMMA) this past week, unit sales of new powerboats in the US have reached a staggering 276,000 in 2018. Presenting an increase of four percent from the previous year. This is the highest levels the US boating industry has seen since 2008. Marine expenditures, engines, trailers and the such, were also up seven percent from 2017.  These stats are at an all-time high in 2018 measuring at 42 billion dollars.

Cruiser sales were also up three percent from 2017, totaling 9,000 units sold in 2018. These boats range in size from 22-32 feet, typically geared towards entertaining and cruising.

Recreational boating contributes an estimated $170.3 billion in economic activity to the U.S. economy. Which is an increase of approximately $49 billion since the last time the association reported economic influence in 2012. The leading states for sales in new powerboat, engine, trailer, and accessories for 2018 include Florida, Texas, Michigan, North Carolina, Minnesota, Wisconsin, New York, California, Georgia and South Carolina (breakdown below). Aside from new boat sales, Americans were reportedly buying an estimated 976,200 pre-owned boats in 2018. With nearly 12 million registered/documented boats in the US for 2017.

The National Marine Manufacturers Association (NMMA) is the leading trade organization for the North American recreational boating industry. NMMA member companies produce more than 80 percent of the boats, engines, trailers, marine accessories and gear used by boaters in the US. As the largest producer of boat and sport shows in the U.S., NMMA connects the recreational boating industry with the boating consumer year-round.