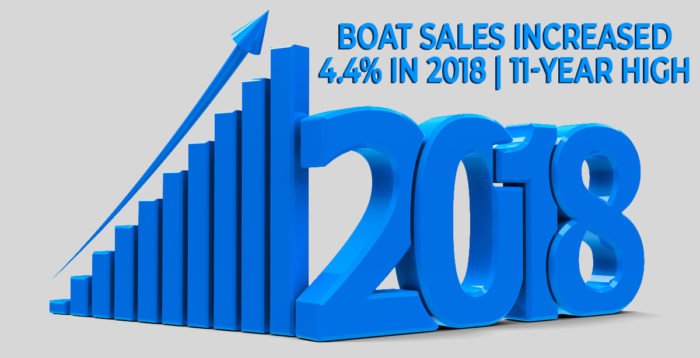 According to the National Marine Manufacturers Association, total recreation boat sales increased by 4.4% in 2018. Highlighting an 11 year high of 281,800 units, bringing a total increase of 5% over 2008 levels.

Outboard Boats Take the Lead in Boat Sales For 2018 Outboard boats continue to rise in popularity with U.S recreational boaters with a staggering 63% of new boat sales in 2018. These boats are becoming the new norm for many boaters everywhere and buyers demand continues to increase. From Downeast style, center consoles and more, boaters can’t get enough.

Many manufacturers also came out with new lines to promote outboards such as Tiara who released their first-ever outboard boat last year and Viking’s Valhalla Boatworks V Series center consoles, announced at the beginning of this year. Seeing the trend that these boats have started and high consumer demand this is only just the beginning for outboard boats.

The Top States in Retail Sales

To no surprise, Florida came in at number one in sales for powerboats, outboards, trailers, and aftermarket accessories. Followed by Texas, Michigan, North Carolina, and Minnesota. These five states accounted for a total of 32% of the 22 Billion in estimated retail sales. Now is a great time to consider purchasing a vessel, with extremely favorable interest rates in the 4.49-4.99 range. These rates are dependent upon several factors including buyer’s credit history, age of the vessel, down payment, etc. Also, when you finance through Galati Yachts Sales you benefit with no loan origination fees, no points, no prepayment penalty with most lenders, as long as you qualify, and you benefit from our many financing resources available. The business office team provides a complete array of product offerings designed to provide you the benefits of our 49 plus years in the industry reducing your cost of ownership where possible.