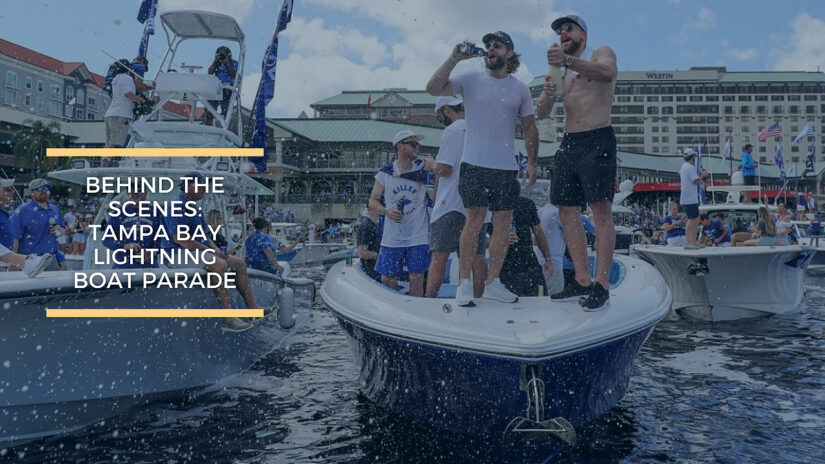 Another victory is in the books for the Tampa Bay Lightning, as they celebrate their second consecutive NHL title. The back-to-back Stanley Cup Champions had quite the celebration on July 12th as they headed “back to boat” life for yet another parade along the Tampa Riverwalk.

Behind the Scenes Look Behind the scenes, our very own Chris Carerre— Captain and yacht broker with Galati Yacht Sales— assisted in organizing the Stanley Cup Championship Boat Parade and had the opportunity to captain the lead boat— the 41 Valhalla. Video footage below shows a behind-the-scenes look at the celebrations aboard the 41-center console, as Lightning players including Andrei Vasilevskiy, Nikita Kucherov, and Mikhail Sergachev were onboard to light it up along the Hillsborough River.

The championship parade for the NHL Lightning makes it the second time this year that Carrere, along with Team Galati, took part in the celebratory festivities for a professional Tampa Bay sports team. Early this year in February, Chris captained the high-performance 41 Valhalla in the Tampa Bay Bucs parade. We extend a huge shout-out and thank you to Chris Carrere for all of his efforts in organizing some of the most cherished moments in celebratory sports history. To learn more about the man behind the parade, click here.

As you can see in the video, thousands of fans, on land and in water, lined the Riverwalk area to celebrate the NHL champs and were met with all of the elements, including the Lightning team and some pretty heavy rain and thunder, later on in the day. Overall, the boat parade was a success for fans and lightning players alike as they partook in all aspects of the Champa Bay celebrations.


To learn more about the renowned center console behind the Lightning Boat Parade, call our Valhalla Boatworks specialists below.