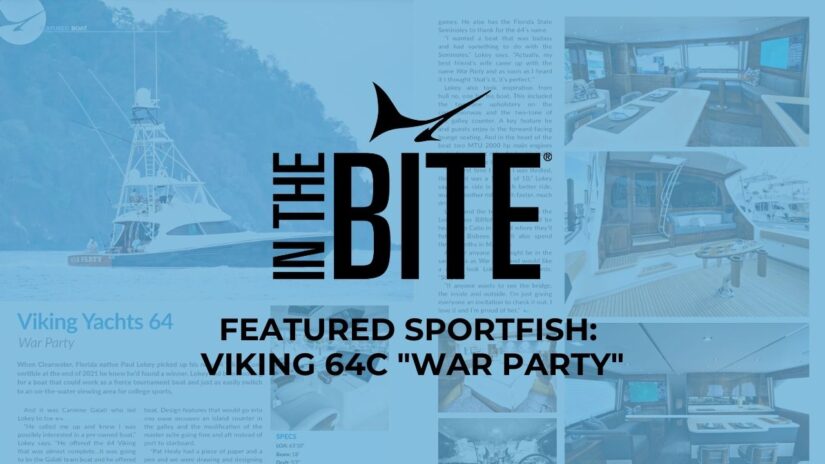 When Clearwater, Florida native Paul Lokey picked up his new 64 Viking Convertible at the end of 2021 he knew he’d found a winner. Lokey had been looking for a boat that could work as a fierce tournament boat and just as easily switch to an on-the-water viewing area for college sports.

And it was Carmine Galati who led Lokey to the 64 Viking. “He called me up and knew I was possibly interested in a pre-owned boat,” Lokey says. “He offered the 64 Viking that was almost complete…it was going to be the Galati team boat and he offered it to me and I bought it late in the building process.”

During the build, Lokey flew up for a Viking factory tour and met with Pat Healey. The two men sat down and together they customized aspects of the boat. Design features that would go into this build included an island counter in the galley and the modification of the master suite going fore and aft instead of port to starboard. “Pat Healy had a piece of paper and a pen and we were drawing and designing changes in his offices and we made it happen,” Lokey explains. “I love all of it.” Two large screen TVs in the salon, in addition to those in the suites, ensure Lokey, a big college sports fan can take in the Florida State University football 31 games.

The Boat Name & Meaning Behind It

He also has the Florida State Seminoles to thank for the 64’s name. “I wanted a boat that was badass and had something to do with the Seminoles,” Lokey says. “Actually, my best friend’s wife came up with the name WAR PARTY and as soon as I heard it I thought ‘that’s it, it’s perfect.’” Lokey also took inspiration from hull no. one for his boat. This included the two-tone upholstery on the companionway and the two-tone of the galley counter. A key feature he and his guests enjoy is the forward-facing lounge seating.

And in the heart of the boat, two MTU 2000 hp main engines make for a quiet ride. As for his initial impression of the boat…“The first time I saw it I was thrilled, thinking it was a 10 out of 10,” Lokey says. “The ride is a much better ride, much smoother ride, much faster, much drier.”

Lokey and the team wrapped up the Los Sueños Billfish Series and will be headed to Cabo in the fall where they’ll fish the Bisbees. They’ll also spend three months in Mag Bay. And for anyone who might be in the same area as WAR PARTY and would like a closer look Lokey has two words: “Stop by.” “If anyone wants to see the bridge, the inside and outside, I’m just giving everyone an invitation to check it out. I love it and I’m proud of her.”

Learn more about the Viking 64C. For over 25 years, Galati Yacht Sales has represented the Viking Yacht brand, selling hundreds of yachts to happy customers throughout the Gulf Coast, Cabo, and Mexico, and recently expanded to the U.S West Coast. Our Viking specialists are unmatched in the industry and pride themselves on the passion they share for Viking sportfish yachts.

Whether you want to know about the history, the build process, or the specifications of a model, our Viking Specialists can help. They dedicate most of their time learning the ins and outs of all Viking models by visiting the New Gretna factory on a regular basis. They also complete ongoing training courses and have a direct point of contact with the leading sportfish manufacturer.

With so much time dedicated to the brand, they obtain valuable information that you will not find anywhere online. Rest assured that our sales professionals will be able to help you determine the best option for your boating needs. With over 50 years of experience and a team of 200+ team members to assist you, turn to Galati Yacht Sales for an exceptional yacht buying experience.