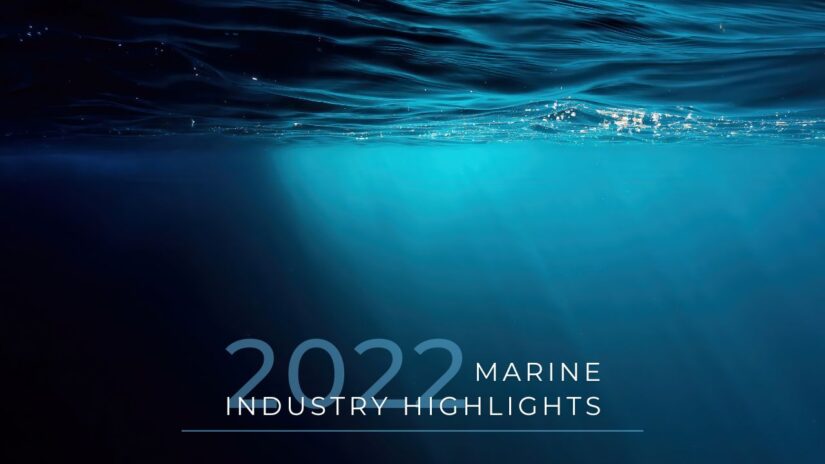 Year after year, the marine industry evolves, reaching new heights with technology advancements, innovative boat models, and community outreach. This year has been no different! 2022 highlighted many developments within the yachting world and saw a group of boating enthusiasts stand together to make a difference. Although there were many top stories this year, these five marine industry headlines stood out above the rest. Here are our top five maritime news articles of 2022.

This past summer, SpaceX Company launched their premier internet service — Starlink Maritime — specifically designed for life at sea. Starlink provides fast and reliable internet service to boaters, oil riggers, yacht owners, merchant ships, and more; from some of the most secluded waters around the globe. The cost for Starlink Maritime is $5,000 per month with a one-time hardware cost of $10,000, and although that may seem a little steep, their case studies show savings of up to 70% compared to traditional maritime internet services.

>>> Find out if Starlink is for you by viewing FAQs

In November, Mercury Marine released the first-ever V10 outboard engines, filling the gap between their powerful V8 and V12 Verado Outboards. The Mercury 5.7L V10 350 HP and 400 HP Verado delivers unbeatable performance, unmatched handling and control, and a smooth and quiet ride, thanks to state-of-the-art technology and advanced design and engineering. The new V10 outboard engine is revolutionizing the industry and transforming boating adventures with a refined and reliable ride.

>>> The Mercury V10 is available on all Valhalla new-builds. Explore Valhalla Center Consoles

By now, I am sure most sportfishing enthusiasts have heard of the new battlewagon in town — the 90’ Viking Sportfish is taking the industry by storm and holds the honorary title of the flagship of the Viking fleet. Constructed in response to the IMO international mandate, the 90 sportfish yacht sets new standards in comfortability, performance, and design. Pat Healey, President and CEO of Viking, said it best — this is the Ferrari of luxury fishing boats.

The 90’ sportfishing yacht will offer a six-stateroom, seven-head layout in an enclosed bridge, convertible, and sky bridge model. Other noteworthy mentions include a 224 sqft cockpit designed for optimized fishablity, an expansive full-beam owners suite, and a smooth-flowing, open layout. Contact a Viking specialist for more information on the new 90 Footer making her debut at the 2023 Viking VIP, followed by the Miami Boat Show.

The boating community rallied together this year to voice their concerns over the National Oceanic Atmospheric Administration’s (NOAA) recently proposed speed restrictions, which apply to the Right Whale Vessel Strike Reduction Rule. The suggested speed rule would broaden the current 10-knot limit to include boats 35 feet and bigger, expand the slow zones to essentially the entire Atlantic Coast as far out as 100 miles from shore, and extend the go-slow mandate for up to seven months a year. In doing so, Viking Yachts, along with many other marine front-runners, anticipate severe negative impacts on the boating and fishing communities on the East Coast.

The boating and fishing communities, maritime businesses, and other stakeholders can voice their concerns by urging Congress and other elected officials to demand that NOAA pause the rule until more reasonable alternatives can be found. Jeff Bezos’s 417-foot mega yacht, which goes by the name KORU, was officially launched back in August from the Oceanco, Alblasserdam shipyard and was towed away discreetly to the Greenport yard in Rotterdam. Unlike other yacht launches, the 127M Oceanco KORU was still unfinished and hauled away in the wee hours of the night around 3 am. Spectators noted a quick transport. Of course, this comes as no shock, as the world’s largest sailing yacht caused quite a controversy earlier in the year.

The original plan was to have the Dutch city dismantle a landmark bridge in order for the three-masted yacht to sail into the North Sea. After a public uproar and some 20,000 facebook signups for locals to throw rotten eggs at the luxury yacht, those plans were scrapped — which thoroughly explains the private getaway.

Controversy aside, the 127M Oceanco sailing yacht is breaking records left and right as it is the longest yacht ever built in the Netherlands and the largest yacht by Oceanco. The luxury yacht also stole the top spot for the largest sailing yacht ever built. KORU is expected to take delivery in 2023, and have a gross tonnage of 3300 GT. Other unique features include an expansive pool on the aft deck, powered by kinetic energy generated by the sails, and will accommodate up to 18 guests and 40 crew.


Visit our news page to stay in the know on all of the latest stories and updates within the marine industry. Or, sign up for our newsletter to get the information delivered straight to your inbox.