Last week we had the honor of attending the 2019 Viking Yachts Dealer Meeting and Sea Trial Event…and wow what a week! The Galati team was out in full force with our Viking Specialists in attendance. As the largest Viking dealer, we use the dealer meeting as a way to learn all the new products features and specifications, which, in turn, helps us educate our customers. The legendary New Jersey yacht manufacturer showcased five new model debuts; two billfish models and three Valhalla Boatworks V-Series center consoles— Viking Yachts subsidiary company. The Viking Yachts Dealer Meeting brought together a record-breaking crowd of 300 attendees during the four-day experience in beautiful Atlantic City, New Jersey. 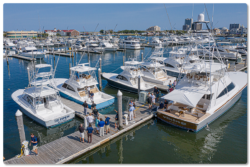 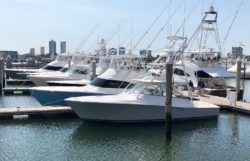 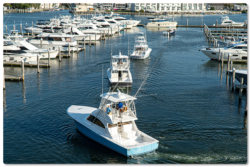 Over 50 sales professionals from dealers all over the world attended the event bringing inquiring customers along for the ride; breaking the record for most customers in attendance, totaling at 80. The five debut models were successfully broken in during the highly anticipated sea trial events. These boats ran non-stop for three full days; with 30 dealer sea trials, 39 customer, and 20 sea trials for 11 media organizations. New to the Viking Yacht line of semi-custom sportfish yachts were the 46 Billfish and the 38 Billfish Open. Both receiving outstanding reviews from customers, dealers and media companies such as Marlin Magazine. “This is a true sportfishing machine in a segment of the market that has been ignored for years,” Marlin magazine’s Karl Anderson said of the 46 Billfish. “The Galati team was also very impressed with the practical layout and the performance of the 46 Billfish, we have signed up to build a 46 BF as a demo of our own,” stated Michael C. Galati. Learn more about the new model debuts below.

The Viking Yachts 46 Billfish is the natural progression for the Billfish line. This new model introduces sharp styling, exciting performance, and legendary Viking quality. The 46 BF will excel as either an owner/operator or captained Viking Yacht. Offering simplicity and ease of maintenance, she’s a ready-to-go fishing machine equipped for inshore and offshore missions. As well as a versatile cruising boat with reliable inboard diesel power.

After much success of the 37BF, the 38 Billfish was designed and built with the same genetic makeup as her predecessor. This boat is sure to be a tournament contender with its day boat styling and impeccable performance. Not to mention, the versatility to fish for big game fish. The layout offers unrestricted access to its 86-square foot cockpit that is fishability approved. The open salon with U-shape dinette and opposite cushioned lounge allow for everyone to be a part of the action in the cockpit.

Viking Yachts astonished the marine industry earlier this year by announcing their breakthrough into the center console division. They introduced their V Series line, an entire fleet of stepped-hull outboard-powered boats built with the same Viking engineering, quality, and performance as its industry-leading sportfishing and motor yachts. A project that went from conception to completion in only 15 months. President of Viking Yachts stated, “Very few companies could pull off what we’re doing.” We’re attacking the center console business the same way that we’ve attacked the sportfishing and the motor yacht business – by pushing the envelope to build a better boat every day.” Learn more about Valhalla Boatworks V-33, V-37, and V-41 below.

Hitting the sweet spot in the V Series lineup, the V-37 shines as a versatile coastal or offshore fish-raising thoroughbred with the legs to run long distances powered by either twin or triple outboards. She’s loaded with lockers, compartments, and hardware that maximize storage. Also, maintains the boat’s 360-degree accessibility. The V-33 is an ideal choice for owners looking to get into their first Viking-built boat and experience all of its inherent benefits. The same robust standard equipment list and nearly all of the options for the V-37 and V-41 are available on this twin-outboard, high-performance center console.

The Anticipated Wait is Over |  FLIBS World-Debut

As the Viking Yacht Dealer Meeting and Sea Trial event came to an end, it’s safe to say the marine industry witnessed an incredible evolution of the Viking Yacht brand between their new models and Valhalla Boatwork’s Center Consoles. “We’ve been waiting eagerly for these boats and every one of them was spectacular. Our customers are thrilled,” said Michael C. Galati. Sales professionals, customers, and the media left feeling enthused and prepared for the arrival of these re-designed, re-engineered and re-invented models. All five new model debuts will make their world premiere at the Fort Lauderdale International Boat Show (FLIBS) Oct. 30-Nov. 3.

Learn More about the FLIBS