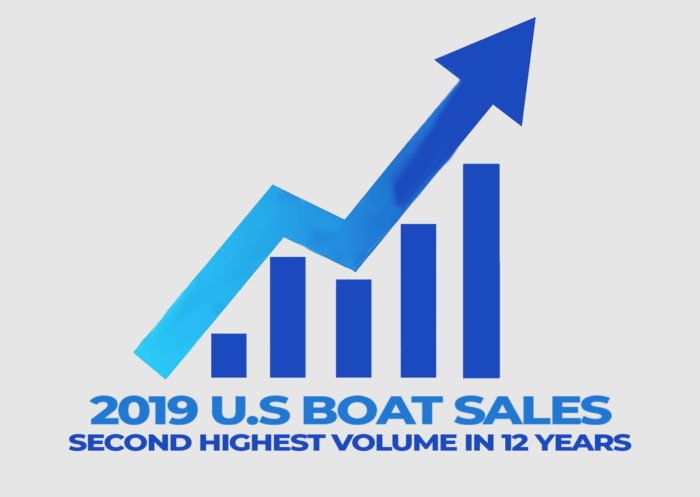 This week the NMMA, representing North American recreational boat, engine, and marine accessory manufacturers, released their finalized numbers for retail unit sales of new powerboats for 2019. According to the report, 2019 U.S boat sales held steady throughout the year and saw a second all-time high. Retail units of new boats reached approximately 280,000 units. The U.S. sale of boats, marine products, and services in 2019 totaled $42 billion, up slightly from 2018. Frank Hugelmeyer, NMMA president stated, “With approximately $42 billion per year in retail expenditures, boating is not only an economic driver but a unique vehicle for the kind of meaningful experiences consumers are seeking more and more of. Experiences that take you outdoors, bring together family and friends, and create lasting memories.”

Personal watercraft, wake-sport boats and cruiser categories continue to lead growth, and we saw an encouraging lift in pontoon and saltwater fishing boat sales in the second half of the year, according to the NMMA. New boats weren’t the only vessels selling at high numbers in 2019. The NMMA predicts about 975,000 pre-owned boats were sold in 2019.

U.S. Recreational Boating by the Numbers
Additional statistics on the industry’s size, makeup and demographics include:

Looking towards 2020, the NMMA is confident the market will remain strong. Economic indicators such as consumer spending remain strong, putting the boating industry in a good position. With the busy winter boat show season coming up, boat sales are projected to increase as much as two percent in 2020. Based on association evaluations, boat shows can generate 50 percent or more of annual sales for exhibiting dealers and manufacturers. Shoppers that attend these seasonal boat shows can expect to find amazing deals on different boat models and different dealers in one location. Whether you’re looking to buy a brand new sportfish yacht, center console boat, or pre-owned yacht, there is no better way to see all the latest and greatest products on the market than to attend a boat show.