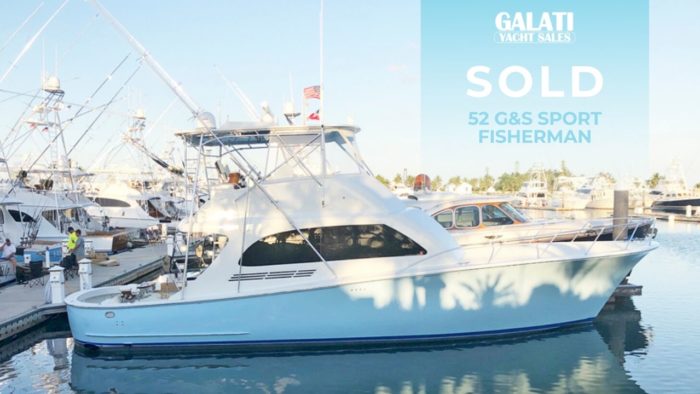 We are proud to announce the sale of this 2019 52 G&S Boats Sport Fisherman. Sales professional Larry Smith had the honor of representing both the buyer and seller in the selling of this yacht that closed on October 4, 2019. Not only was this boat built by the renowned G&S Boat Yard but this boat is the most recent and last boat G&S ever built. A piece of history any sport fisherman would be proud to own. Known for their great maneuverability, G&S Boats are highly sought after for those looking to obtain world records. Team Galati extends congratulations to both parties in this transaction.

The Galati Difference | 50 Years In Business The Galati name has stood for integrity and innovation for 50 years. Our knowledgeable and experienced sales and customer support teams are unparalleled in the yachting industry. We have over 5000 worldwide listings on our website and sell more than 400 boats per year.

Since 1970, our Sales Team has managed billions in yacht sales with our world-class customer support for both buyers and sellers. We have a thorough marketing plan in place and a team of professionals to help sell your yacht. Not to mention, a full business office readily available to assist. Purchasing or selling, you owe it to yourself to experience the Galati Difference. Check out how we can help you sell your yacht.

Larry Smith has over 40 years of boating industry experience and a reputation for exceeding his client’s expectations. He joined the Galati Team back in 2005 and his experience includes representing several key yachts manufactures. As well as an extensive background in yacht sales. Our Galati Trade 52 G&S Sport Fisherman represents more than just a world-class custom sportfishing boat. The story behind this vessel is incredible and starts with Stuart Campbell, a world-famous angler that holds numerous IFGA fishing records. Having been originally commissioned for Mr. Campbell, this boat was visualized to partake in the chase of large marlin and other saltwater gamefish all over the world. More so, it was ideally designed for pursuing light tackle records where a boat’s ability to maneuver are of the utmost importance. Unfortunately, Stuart Campbell passed away before this 52 Sport Fisherman was complete.

Clint Hixson, another top angler in the Gulf of Mexico, decided to take on the exciting venture of finishing the 52 G&S and purchased the hull in 2015. Since he was a child, he envisioned owning a G&S Boat and he set out to build the boat of his dreams. Hixon wanted to build a vessel he could run himself and one that could accommodate his family. The 52 G&S Sport Fisherman sounded perfect. More than anything though, this boat was a tribute to his father. A thank you for teaching Hixson the love of fishing and boats.

52 G&S Boats Sport Fisherman | The End to an Era Hixson went to work with Steve Sauer and Buddy Gentry, partners at G&S Boat Yard, to customize this 52 sport fisherman, unknown at the time that this would ultimately be the last G&S boat built. Steve and Buddy met in late 1960 and have impacted the sport-fishing industry far more than they could have imagined. They went on to build over 50 boats together and established G&S as a premium custom operation, with one of the most respected pedigrees in the world. Many of their custom boats accumulated several world records that are incomparable by any other boat builder.

The two worked on the boat right up until Steve’s unfortunate passing in early 2018. The end to an era for G&S Boats. It was decided right before the completion of the 52 Sport Fisherman that this would be the last G&S Boat built. Steve battled a short but noble battle with liver cancer and passed away on May 19, 2018. Hixson described Steve as a perfectionist, one who was great to work with. After Steve’s passing, Hixson visited the factory where he promptly noticed shirts made up that read “G&S Boats 1973-2018. Adios.” Leaving an impression on him, Hixson decided he wanted to provide an appropriate tribute and asked Buddy if he could name the last G&S Boat “Adios.”

That’s how “Adios,” 2019 52 G&S Sport Fisherman came about. The Hixson family fell in love with “Adios” and fished all around Florida and the Gulf Coast. Unfortunately, they soon realized they needed a bigger vessel to accommodate the whole family. This piece of history now resides in Grand Isle Louisiana, represented by Galati broker Larry Smith. You will not want to miss out on this vessel if you are in pursuit of a serious fishing machine.

With approximately 250 engine hours, she cruises comfortably at 28 knots burning 55GPH. Giving her an excess of 500 miles at 28 knots, her top speed coming in at 35 knots. Other notable features include her hardtop flybridge with three side enclosures, Bluewater fighting chair with a rocket launcher, fresh and saltwater wash-downs, in-deck live wells, twin MAN 800 diesel engines, and much more. View the complete listing here for more details.