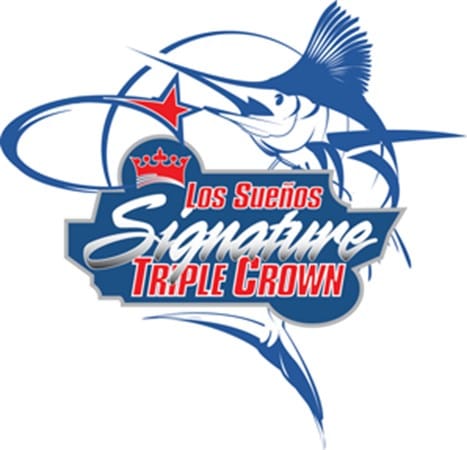 LOS SUEÑOS SIGNATURE TRIPLE CROWN BECOMES A MARLIN TOURNAMENT – Leg 1 of the 2017 Los Sueños Signature Triple Crown achieves a phenomenal 212 marlin releases by 50 participating boats in just 3 days.
Los Sueños Resort and Marina, located at Playa Herradura on Costa Rica’s Central Pacific Coast, held the first leg of the 2017 Los Sueños Signature Triple Crown billfish series, presented by Chantilly Air January 18‐21. A total of 50 of the world’s most competitive billfishing teams comprised of 237 individual anglers challenged each other over three days of fishing, releasing a total of 997 billfish, including 785 sails and 212 marlin. The lesson this leg? That there is only one thing that can consistently be said about fishing – it’s unpredictable!

DAY 1
Three minutes after lines in on the first day Blue Eagle called in a marlin hook up, which they would go on to release 11 minutes later. By 9:59 am the 13 marlin had been released, including a double marlin release by Enjoy at 9:31 am. By the same time 97 sails had been released. Despite their double marlin release, Enjoy was third in the pack with their 1,100 points at the 10:00 am update, with Blue Eagle in lead on time with 1,200 points, followed by Big Oh in second with 1,200 points. At midday it was still Blue Eagle at the top of the leaderboard, now with 2,000 points, followed by Sea Fix with 1,400 points and Dealers Choice with 1,400 points. The fleet had released 160 sails and 29 marlin. By the end of the day a total of 316 sails and 66 marlin had been released and Tranquilo, after releasing four marlin – three of which were released between 3:20 pm and 3:52 om ‐ and 13 sails for 3300 points, ended up at the top of the leaderboard, followed by Tarheel with 3100 points (11 sails and 4 marlin) and Agitator with 2800 points (13 sails and 3 marlin).

DAY 2
Once again Blue Eagle was first to call in to Tournament Control on Day 2 with a sailfish release at 8:05 am. Within an hour of the first release a total of 6 marlin and 29 sails. Big Oh released a sail at exactly 10:00 am bringing the total fish count to 70 billfish, including 12 marlin and 58 sails. Rounding out the top three boats was Tranquilo in first with 4200 points, Agitator in second with 3400 points and Tarheel in third with 3100 points. Four hours later Xta Sea bumped Tarheel out of the standings, taking third with 3800 points, behind Agitator in second with 3900 points and
page1image23528
Tranquilo still at the top with 5200 points. Proof that this was a marlin tournament if ever there were one, Marlin Darlin released five marlin and ended the day in fourteenth place overall, Xta Sea released a two day total of 7 marlin and 4 sails and was in seventh in the overall standings going in to Day 3. Numero Uno released a marlin at 4:17 pm and Sea Angel battled a 600 pound blue marlin from 3:48 pm until 5:27 pm, when they called in the last fish of the day. The fleet released a total of 218 sails and 57 marlin on Day 2, for a two‐day total of 534 sails and 123 marlin. It was Tranquilo in first going in to Day 3 though, with 17 sails and 7 marlin releases for a two‐day score of 5200 points, followed by Agitator in second on time with 4200 points after releasing 22 sails and 4 marlin, and Blue Eagle in third, also on time, with 17 sail and 5 marlin releases, over On Location in fourth.

DAY 3
Agitator called inwith the first release of Day 3, a sail, at 8:05 am. By noon the marlin count had reached 30 for the day and the fleet had released 90 sails. In the standings Off Duty managed to nudge Tranquilo out of first, taking the top position with 5500 points. Tranquilo was in second with 5300 points and Fish Tank made their way on to the leaderboard in third with 5100 points. Things picked up considerably in the afternoon and for the first time ever a boat called in a sextuple marlin release – Enjoy reported six simultaneous marlin releases at 1:27 pm on Day 3.
One for the record book. By 2:00 pm Alpha Bravo enjoyed top position with 6200 points, on time over Reel Screamer, and followed by Enjoy in third with 6100 points. At 2:01 though, Xta Sea took top position with a 200 point lead over Alpha Bravo after releasing a marlin. The top seven boats were all in contention for first place overall. D.A. Sea had a nice run with a triple marlin release at 2:44 pm, as did Agitator with a triple marlin release at, according to the radio log, 3:33 pm. After all the scores were checked and the fish counted, the final three‐day tally came to 997 billfish, including 785 sails and 212 marlin, 89 of which were released on Day 3 alone. Xta Sea was
the (almost) silent contender, not even showing up on the leaderboard until 2:01 pm on Day 3 and finishing in first place overall with 6600 points after releasing 6 sails and 12 marlin. Agitator came in second with 30 sails and 7 marlin for 6500 points, followed by Enjoy in third, on time, with 13 sail and 10 marlin releases for 6300 points. Big Oh was close, releasing their final fish of
the tournament – a sail and a marlin – at 4:03 pm, for fourth overall.

BACK STORIES
Team Xta Sea, headed by Alexis Chamorro, fished aboard Reel Doc, a 61’ Viking captained by Ronnie Riebe. Alexis and fellow anglers Julio Chamorro, Emilio Munkel and Jacob Graves, have been fishing Los Sueños tournaments for over a decade. They placed eighth on Day 1, seventh on Day 2 and won first place in the 2014 Triple Crown Leg 1. This tournament they were the silent thunder, releasing few fish but making them count by focusing on the marlin. Xta Sea is the only team from Nicaragua and was proud to represent their country.
page2image32944
Agitator, a 51’ Scarborough, participated in the Los Sueños tournaments for the first time in 2016, in which they ended up taking first in both the second and third legs, as well as Series Champion. This family team, captained by Jon Duffie, with anglers Jonathan Duffie, Jeremy Duffie, Judith
Duffie, Danny Gough and Charles Gerlach finished third on Day 1 and second on Day 2.
Enjoy, a 55’ Revenge captained by Andy Helms, was not expecting their third place finish when their name was called at the awards ceremony. Representing the Triple Crown presenting Sponsor, Chantilly Air, it was a pleasure to invite them back on stage after being the Series Champion of the 2014 Triple Crown. Enjoy finished ninth on Day 1 and twenty‐fifth on Day 2, but their sextuple marlin release on Day 3 landed them in third place overall, giving anglers John
Gudelsky, Jason Brown, Frank Tardonia and Michael Murray something to write home about.
On behalf of the tournament committee, a heartfelt congratulations to all of the participants!

Over 700 guests came together under the stars at the Los Sueños Beach Club to enjoy a phenomenal buffet dinner and a live musical performance by Chocolate. Immediately preceding the presentation of trophies, prizes and checks to the tournament winners, guests enjoyed the highly anticipated dock show filmed and produced by Rich Christenson and Adam Moffat. The ceremony was closed out by a spectacular fireworks display by Faisa and a jam‐packed after party with DJ Charlie Stevens was hosted at the Terrace Lounge in the Los Sueños Marina Village. Tournament winners took to the stage to receive a total of $172,000 in cash, as well as other prizes provided by tournament sponsors.
Trophies by Gray Taxidermy
Other prizes and awards by: Tunaskin‐ apparel; Steve Goione‐ framed prints of the 2017 Triple Crown tournament art; Costa– sunglasses for the winning anglers; Tito’s Vodka; and Flor de Caña‐ aged rum.

TOP ANGLER
Congratulations to Hubert Lagane of Alpha Bravo for releasing 3 sails and 5 marlin over the three days for 2800 individual points and landing the distinction of Top Angler for Leg 1.

OWC QUALIFYING EVENT
The top team from each leg of the Los Sueños Signature Triple Crown will be eligible to compete in the 2017 Offshore World Championship. For further information, please visit www.offshorechampionship.com.

ABOUT THE LOS SUENOS SIGNATURE TRIPLE CROWN
2017 marks the 4th Annual Los Sueños Signature Triple Crown billfish tournament series. The Triple Crown consists of three annual tournaments, in January, February and March each year, and is fished out of the world class Los Sueños Resort and Marina in Costa Rica. The dates for the next two legs in 2017 are Leg II: February 22‐25, and Leg III: March 22‐25.

ABOUT LOS SUEÑOS RESORT AND MARINA