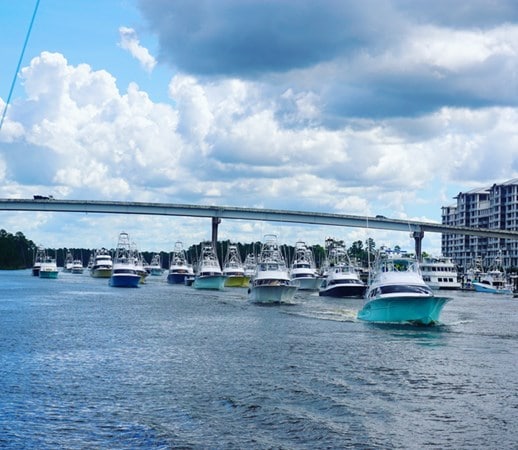 When they say “the greatest show in sportfishing” there is no exaggeration. Orange Beach, Alabama ignited in action during the week of the Blue Marlin Grand Championship. Fishing fans rolled into the Wharf by the hundreds to witness the weigh-ins on Saturday night.

The action-packed week began at the Galati-hosted Crew Party with a live band. Plus free-buy-in Poker tables and the infamous man-against-man fighting chair competition! It was the perfect way to start the week by making friends, enjoying the camaraderie and getting pumped for the weekend to come out on the water!

The Galati 66 Enclosed-Bridge Viking led the pack of 64 vessels through the intercostal to Mobile Bay Thursday afternoon. In a perfect and visually captivating line, the sportfish vessels idled through the channel that lines one of Orange Beach’s main roads. Fans from the area were lining the shore to watch the boats parade out. It was such a beautiful sight. Towers as far as you could see in a perfect line and the colorful hulls mirrored a rainbow when winding around a bend in the intercostal. Once the inlet of the bay was reached and the No Wake sign disappeared from view, the vessels took turns laying on the throttles resulting in a cloud of black smoke. Tournament kick-offs are always interesting to watch, but it rarely takes your breath away.

After the kick-off, the marina resembled a ghost town. All accept the Wharf remained packed with families and fans awaiting the weigh-ins. Family’s declared they planned their vacations around the Blue Marlin Grand Championship because it is truly an unforgettable event. Plus, a blast for all ages.

The count down to the opening of the weigh-in scale Saturday evening had everyone excited. Grabbing a good seat in the front and getting ready for the night. The minute 5 o’clock hit, boats started backing down with their hopeful prize-winning fish. Four blue marlin weighed-in, the biggest being 502 lbs. by Chasin’ Tail at the start of the show, resulting in a crowd of heads looking up and jaws dropped.

We congratulate all of the anglers that participated in the tournament. We truly enjoyed watching the angler teams be a family unit and enjoying the sport together because that’s what the sport is truly about.

Special shout out to our customers:

“Done Deal” a 70’ Viking with captain Jason Buck. Placing 2nd in the Catch and Release category with a 1,503 lb. blue marlin.

“Quick Time” a 70’ Viking with captain Shelby Johnson. Placing 3rd in the Catch and Release Category with a 1,202 lb. blue marlin.