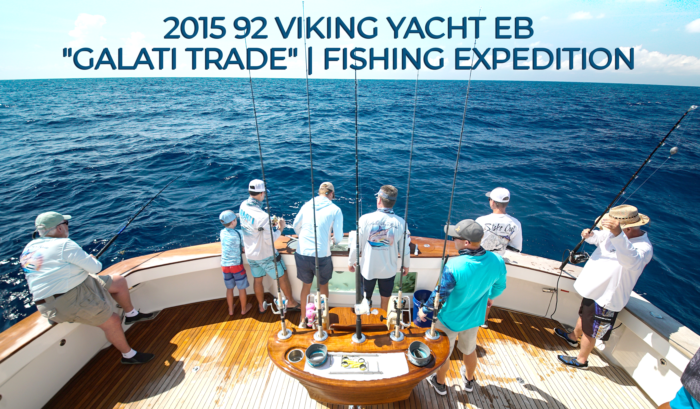 Sunshine skies, 80 miles off coast, fishing aboard a 92’ Battlewagon— that’s what we call another day in paradise. This past month Galati Broker Chris Carrere had the opportunity to fish aboard his 2015 Viking Yachts 92 Enclosed Bridge Galati Trade listing— and like this remarkable vessel, the trip was nothing short of amazing. Aboard the 92 Viking Yacht was Captain Gary Evanson, Mates- Preston and Jack, and multiple friends including Chris and his son Jack Carrere (8).

The fishing expedition started in Belleair, FL. Everyone loaded up and set out for a day of great fishing. The huge transom livewell with a window aboard this “Galati Trade” 92 Viking Yacht, was soon filled with bait fish, plenty for everyone onboard. With dual MTU 16V2000 M96L engines capable of reaching speeds in excess of 35 knots and an additional fuel tank, this 2015 92 Viking had no problem reaching their destination 80 miles out in the Gulf of Mexico. The anchor was set in just over 100’ of water where the fun was just about to begin.

Catch of the Day Aboard The 92 Viking Yacht EB 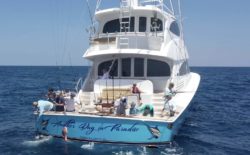 The vast cockpit allowed room for multiple anglers to fish at the same time.  Also, the upper mezzanine offers additional seating for more guests to watch the live action and relax. In a short time, anglers were catching fish left and right. The SeaKeeper M3500 Gyro Stabilizer installed on this 92 Enclosed Bridge reduced the roll of the boat for a better fishing experience; allowing the anglers with ease of hooking fish and comfortably moving through the boat. With large port and starboard under deck fish boxes, anglers were able to freshly store their catches of the day. Including American red snappers, multiple large mangrove snappers, amberjacks, and grouper. 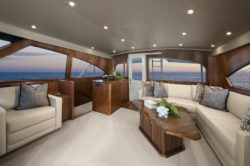 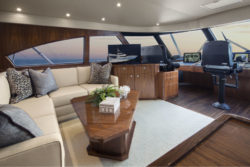 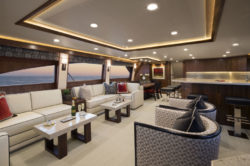 After about a couple hours of rigorous fishing, it was time to recharge. The group took a break and ate lunch in the salon and on the aft mezzanine. The salon, galley, and dining area “great-room” provides true motor yacht living space. Two large built-in sofas form a U-shape with a small accent table between, and one featuring custom rod storage beneath. Starboard in the salon is access to the flybridge, entertainment center with wet bar, and additional seating area with two large club chairs. Both quarters offering a perfect space for relaxing and entertaining.

After lunch, the group took to another round of fishing. For those that weren’t up to it or simply needed a break from the sun, found comfort on the mezzanine deck with AC. This space offered a great vantage point for people to watch in on the action. All while enjoying a break from the sun and enjoying the cool AC. The fishing continued for another couple hours with non-stop action, catching fish until everyone was drained. Heading back the group took to the salon and enclosed flybridge. Listening to music and watching TV in complete relaxation and comfort until reaching the docks. 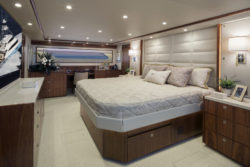 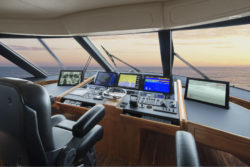 One thing for sure, if you’re looking for a large and luxurious vessel with the performance of battlewagon, there’s no doubt that our Galati Trade is the perfect fit for you. The 92 Viking delivers on performance, fishability, and accommodations that raises the bar in complexity and style.
Being a Galati Yacht Sales trade-in yacht, it is priced to sell. Not to mention our trades are kept to the highest standards and provide great buying opportunities on late-model, used yachts and boats. Now is the perfect time to inquire about this stunning Viking Yacht.  Read more about the 92 Viking Yacht EB “Galati Trade” here or view the listing by clicking the button below.