Yellowfin boats built in Bradenton, Florida, are made in a conglomeration of 16 buildings that comprise 150,000 square feet of manufacturing space.

Founder and CEO Wylie Nagler started Yellowfin Yachts in 1998, the same year he sold Back Country Powerboats, his first company, to Champion Boats. He wanted to design an offshore fishing boat his way. Since selling his first Yellowfin at the Miami Boat Show in 2000, his company has built and sold more than one thousand boats and yachts.

Despite those impressive numbers, Nagler doesn't want to build as many boats as possible at the lowest price; instead, his philosophy is to produce a yacht with the best possible materials. If he finds something on the market that's better than what he's already using—a cleat, for example, or a rod holder—it automatically goes into the next revision.

Yellowfin offers eleven models that range from a 17-foot skiff to a 42-foot offshore trawler. The 24 Bay and the 36 Offshore are the company’s best sellers. The 24 Bay is so popular that, says Nagler, “we can’t build them fast enough. We build one a week.” The 36 is Yellowfin’s “backbone” because it runs better and faster than other companies’ offerings in that class. “It’s a phenomenal running boat,” says the CEO.

You won't find any contract naval architects, structural engineers, or custom painters on Yellowfin’s payroll. Everything—from design to testing to final build—is done in-house without the aid of outside experts as Yellowfin's designs use real-world experience.

Nagler's grandfather was a yacht broker who raced boats. Nagler himself used to be a boat rigger. His lifetime of experience, growing up around boats in Miami, informs his designs and his maritime sensibilities. All Yellowfins have a center console, which adds to their stability and provides plenty of elbow room for anglers along the perimeters. Their stepped-hull construction introduces more air underneath the boat, upping its speed capacity. The 36 and 42 have a top speed of 62 mph.

Most of Yellowfin's models can be semi-custom built. Clients can choose engine and seating configurations; T-top, console, coffin box, and swim platform styles; and colors for rub rails, pipework, hulls, and upholstery. Every boat starts with solid vinyl ester resin, compared to the vinyl ester skin coat that most companies use. Some models also incorporate resin infusion, which reduces weight, giving a shallower draft and increasing fuel economy.

People love to fish in the Gulf of Mexico, and they love to race powerboats there, too. Why not build a boat that would go fast and have the amenities that sports fisherman craves? Yellowfin can build that boat. 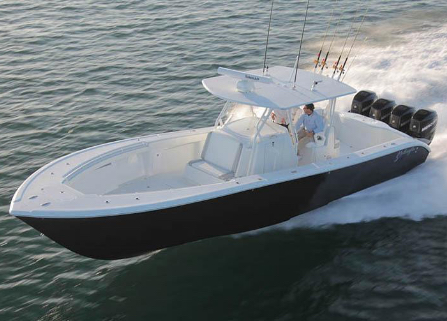