North Carolina manufacturers World Cat builds some of the world's most popular power catamarans . They come in a variety of models from 23 to 40 feet in length and include saltwater fishing boats, center consoles, dual consoles, sun decks, and cruisers . World Cat also builds Glacier Bay catamarans and operates a custom division that offers 40 - foot models .

No matter the model, its size or configuration, every World Cat power catamaran is built to a high standard of excellence . They offer the major advantages of a power catamaran, including a smoother, softer, faster, and drier ride in even the roughest conditions . World Cat boats are known not only for their stable ride and durability but also for their shallow draft and generally wider beam . They're perfect for just about any boating activity, including day or overnight cruising, fresh and saltwater fishing, water-skiing, and other watersports.

The company was founded in the mid-1990s, starting with the Glacier Bay models which won raves from boaters in the Pacific Northwest and has grown to become one of the world's leading power catamaran manufacturers . Since its inception, World Cat has sold boats to more than 80,000 customers worldwide who have come to appreciate their many benefits .

The catamarans; optimal performance begins with the trademarked VectorFlo®hull design . World Cat brand boats feature planing hulls, which employ a flatter V - bottom surface for quicker on - plane performance and better speed . Glacier Bay models are fitted with a semi - displacement hull for a softer ride and outstanding seakeeping . The company gives customers a variety of styles and options to choose from to ensure they get the boat that\’s perfect for their needs . 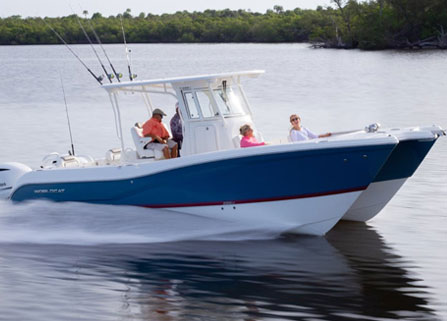