The story of Sealine began in 1972 in Kidderminster, England; founder Tom Murrant had always had a passion and love for the sea and yachts. The challenge was that he couldn't find one that met his exacting standards, so he decided to build his own. He gathered all of the experts he could locate and set to work launching a company that became one of the outstanding yacht builders in the world.

They started off building boats that were less than 25 feet in length and developed a philosophy of maximizing space. As the engineers and designers squeezed out every last inch of space, Murrant came to believe that this was the secret to building a yacht that would have few, if any, equals.

By the early 1980’s, Sealine had developed two superior vessels that captivated the British Isles and began to look outward toward even larger markets. As the 1990's rolled in, Sealine established itself as one of the top names in the industry with the introduction of its Flybridge 60. In 2013, Sealine joined with the German-based HanseGroup, and their manufacturing facilities have become state-of-the-art manufacturer poised on the Baltic Sea.

The Sealine experience is like no other; it is all about creating an exceptional experience while at sea and the maximizing of all interior space. For Sealine, it is all about their owners enjoying an unparalleled lifestyle while at sea. They want their Sealine vessels to be the comfortable center while on any seagoing adventure. Space, light, and luxury are at the heart of every Sealine yacht. Skylights, rounded, full-length glass everywhere and views so broad and so encompassing it will take your breath away.

Sealine’s C430 is the most recent addition to the Sealine fleet. Sleek and powerful at 43 feet in length, it also has 26 square feet of glass along with three double cabins. With the Volvo IPS 600, 435 HP engines this vessel can cruise at 28 knots with a top speed of 35 knots.

The power and majesty of Sealine yachts are on full display with their 52-foot F530. With two Volvo 800 IPS engines, it easily tops speeds of over 30 knots with the stability and grace of vessels that are much larger. It also contains two wet areas with a shower as well as three spacious cabins. The Sealine commitment to space is on full display here, and its flybridge design makes it the perfect vessel for whatever adventure awaits.

Sealine offers three different and unique yacht model series that have something for everyone whether it be their three cruisers, two flybridges or their new and exciting Sport S330. From a simple vision over forty years ago, Sealine has grown to become a world recognized brand that remains forever dedicated to light, space and the excitement of roaming the seas. 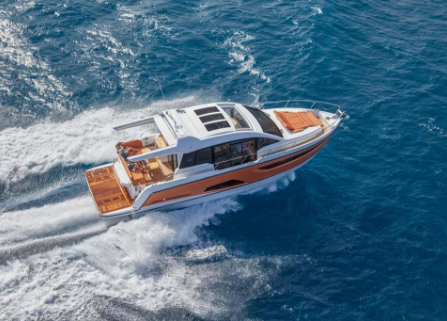