In 1970, Sabre Yachts began a tradition that has yet to be equaled as they set out to design and produce the finest dual engine pod driven yachts that owners had yet seen. Their tradition-rich designers and builders combine the luxury, comfort and style with the dependability and performance.

The turning point for Sabre came in 1989. In that year, the company introduced the 36-foot Fast Trawler which would go on to inspire Sabre’s unmatched motor yacht line. It combined the space and the comfort of a traditional trawler but gave it a new class of performance that would be the hallmark of their future yachts.

In 1995, the company took yet another significant step toward becoming one of the world’s premier builders when they purchased North End Composites which is based in Rockland, Maine. The company excelled in the production of fiberglass parts and marine molds which launched a popular line of small and mid-sized diesel engine yachts in the 33 to 41-foot range. Sabre had now become a significant manufacturer.

The evolution continued until, today, Sabre now offers two distinct lines manufactured at two Maine locations utilizing a VIP resin technology that is state of the art along with design and performance features that their rivals just can’t exceed.

Sabre offers four yachts in their Salon Express line as well as two Fly Bridge models and their unsurpassed 66 Dirigo which is in a class by itself. The Salon Express models are futuristic in design and capabilities. From 360-degree site lines to pod drives and joystick controls built for unmatched maneuverability, to configurations with two cabins, two heads and the ability to cruise at up to 32 knots. With half up galleys, highly functional side decks and cockpits as well as perfect handrail placement and tons of utility space, the Salon Express line has everything a yacht owner would want.

The Fly Bridge models are the epitome of luxury and performance combined with unmatched speed as well as a quiet and smooth ride. They offer that 360-degree view that only the open air experience can bring with the diesel powered motors providing extreme fuel efficiency with the freedom of joystick controls. The unmatched ability to view everything that around brings ease and confidence to any docking challenge.

The Sabre lines of motor yachts have been time tested and tradition driven that forever offer the comfort, luxury and performance that raises them above being an elegant yacht. 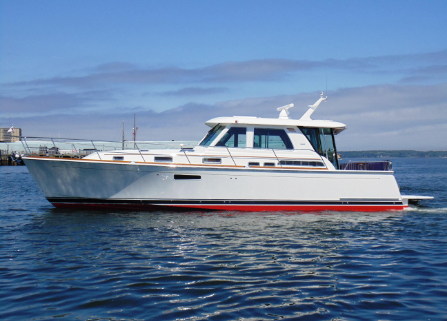