Navigator yachts are built rugged to withstand the demands of the Pacific Northwest, from the warm waters of Mexico to the rough seas in Alaska. Their solid fiberglass hulls are designed to maximize fuel efficiency, with drag reduced by almost a third when the yacht is on a plane at cruising speeds. Innovations such as the Joystick Maneuvering System and the Seakeeper Gyro Stabilizer are two recent innovations that improve performance and stability, giving an owner confidence during operation. Inside, the living spaces are semi-customizable, but should an owner desire, the company can design a yacht from the ground up. This Californian company has been building yachts for over 40 years and remains American made, supporting the US economy and its families.

Navigator Yachts is the vision of Jule Marshall, who began building boats in the 1950’s under the name Californian. Despite the risks of keeping the company based in Perris, California, instead of moving overseas, Jule’s commitment to his employees and his belief that they could produce boats efficiently drove him to keep the headquarters in the Golden State. The strict air quality standards forced the company to invest in technology that controlled air pollution, making these yachts some of the “greenest” in the water today. A downturn in the marine industry refocused the company on producing products that were not only environmentally friendly but also offered great value. Jule’s sons, Gil and Steve Marshall, joined the family business as young men, and are still a part of the company today.

The current line-up features models ranging from 45’ to 68’. The hulls are very stable at rest and feature a wide shape with a planing surface that reduces drag by 30 percent. Navigator yachts feature classic lines that preserve the elegance of the original models. Seating configurations can be customized, with several options available, no matter which model. Interior spaces are designed to maximize visibility, often with a 360-degree view. The two California models are built for long range cruising, with a single engine for fuel economy, walk around decks and a Portuguese style bow.

With over 40 years of yacht building experience, Navigator is a company with a long tradition and a bright future. Their boats offer great value, as the company constantly balances functionality and price, often skipping on frills that drive up the price of a semi-custom yacht. In the water, a Navigator appears confident and strong, with timeless looks and serious engineering behind their steady performance. Owners have high expectations and Navigator answers every time. 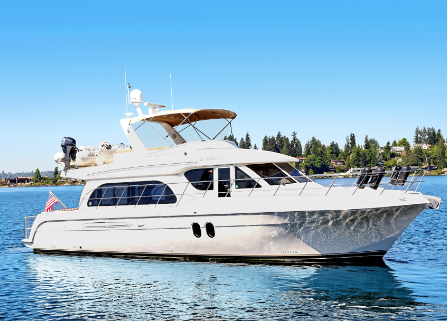