Established only a little over 30 years ago, Mangusta Yachts is a relatively new player in the yachting world. The brand was started in 1985 by the Balduccis family under their corporation Overmarine Corp. Besides luxury yachts, Overmarine Corp. also produces peacekeeping and coastguard ships, a testament to their love for all things marine.

Despite its young age, Mangusta Yachts has already taken the Americas by the reigns. The shipyard has delivered over 300 yachts between 72 and 165 feet. Mangustas are a frequent sight on the coasts of the Americas.

“The popularity enjoyed by our yachts in this market confirms how much Mangusta’s values perfectly meet the needs of American owners,” Stefano Arlunno, Overmarine Group Area Manager Americas, said. “An appreciation due to the timeless design of the lines, the visual impact but also the functionality and exceptional engineering quality.”

Mangusta is known first and foremost for its versatility. A popular model, the Mangusta 165 E, the fastest 50 mt maxi open yacht in the world, reaching up to 40 knots, is also able to decrease fuel consumption 35% from previous models. In less than six years, 12 of this model have already been sold. The versatile design embedded in their craftsmanship is extolled among yachtsmen. The model was named one of the "BEST of the BEST" by the Robb Report in 2015.

The Mangusta 94 is also a popular model for Americans. With an incredibly shallow draft of less than 6 feet, it is perfect for coasting through shallows such as the canals of the Keys. This model is known for its fast speed of up to 36 knots and large entertaining spaces, both inside and out.

This year, Mangusta has released its flagship superyacht, El Leon. The ship is 178 feet and designed by Alberto Mancini. It is part of Mangusta's GranSport fast-displacement line that boasts aluminum builds. El Leon has four 16V MTU 2000 diesel engines, allowing it 3,500-mile range and a top speed of 30 knots. The exterior is sleek with impressively long tinted windows that allow plenty of natural light into the cabins.

“El Leon will serve as a new beginning for Mangusta, a concrete demonstration that it has the technical chops to go beyond its performance roots into larger-length, fast-displacement superyachts,” Michael Verdon of Robb Report said in an article on the model.

The existence of El Leon proves Mangusta's staying power supported by their ongoing, continuous effort towards self-improvement and innovation. Just 30 years into the game and this boatyard is already an influential and vital player in the market. Which not only proves the limits of versatile luxury can be pushed but forces others in the market to compete. The Balducci's will continue to be on top of the market for the foreseeable future, especially with Alberto Mancini as their designer. This Italian boatyard has become one of the mainstays of American yachting life. 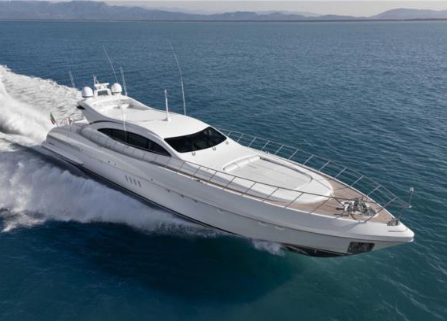