Invincible Boat Company builds high-performance saltwater fishing boats from 33 to 42 feet, including center console monohull and catamaran powerboats. Operating from a modern plant in Opa Locka, Florida, in the Greater Miami area, Invincible takes pride in building some of the fastest, driest and most comfortable open fishing boats on the water. The company also focuses on producing quality finishes and attractive looks.

Invincible’s boat models are available with Yamaha or Mercury power in dual, triple or quad configurations, depending on boat size. Its deep-V monohulls are capable of speeds in excess of 60 mph. Invincible also offers a wide variety of optional equipment, allowing boaters to tailor their boat to their specific requirements and dreams.

History
Invincible Boat Company was founded in 2006 by Alex Lipworth, an entrepreneur who was a serious angler interested in building boats that catered to die-hard anglers. In July, 2019, New York-based private equity and investment firm EagleTree Capital acquired a majority state in the company. Lipworth stayed on to guild product development, and John Dorton, former CEO of MasterCraft, was named Invincible Boat Company CEO.

Invincible also revealed plans for a 50,000 square-foot expansion to its factory, which will include a factory showroom to accommodate customers who are building a new Invincible or looking for accessories to enhance their current Invincible.

Design
Invincible’s patented monohulls were designed by noted naval architect Michael Peters. These deep-V hulls feature tunnels and boast among the lowest drag coefficients of any monohulls in the world. 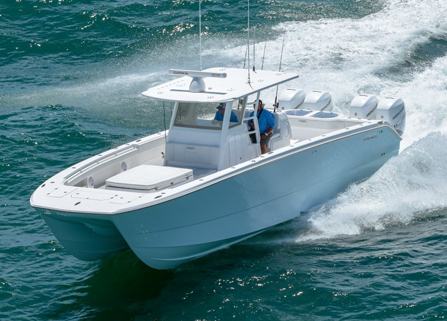