HCB Yachts for Sale Ranging from 60' to above'

HCB Yachts produced luxury yachts that are known for their quality, aesthetic appeal and seaworthiness. Close attention was paid to not only the visual lines of a yacht but also to every livable space. The results speak for themselves as each launched vessel combined thoughtful visual design with functional elements such as comfort and performance on the water. A discerning customer will appreciate the attention to detail that was part of this company’s mission statement. Many of the yachts launched from HCB ’s shipyards in Giammoro are available for charter and can be found in ports worldwide.

In 2001, this newcomer from Italy launched its first yacht model, having spent 21 years designing yacht interiors and studying the aspects of the US yacht market. Founded in 1993 by Lino Siclari, HCB Group initially specialized in building yacht interiors for other builders. After a few years, they moved their production facility from Milan to Sicily and soon became one of Italy’s largest shipyards. Their first model introduction, HCB 56, in 2001 at the Genoa Boat Show started garnered rave reviews. Subsequent models have won major industry awards, and despite the fact that HCB is now out of business, their used yachts are still highly coveted on the used market.

These are yachts that were designed for a customer who is looking for a combination of visual appeal and performance and a balance between tradition and innovation. The company’s Background in interior manufacturing gave it a history of expertise in designing visually appealing spaces, while its Italian roots drove the pursuit of appealing shapes for its hull designs. HCB yachts strike a balance between aesthetics and functionality that allows an owner to enjoy every aspect of boating and performance on the water.

There are many different models to choose from ranging from 56’ to 86’, and they were manufactured from the years 2001 to 2007. The company’s first model was the HCB 56 which was launched in 2001 achieved international recognition. Following the 56, in 2005 the HCB 64 won the World Yacht Trophy award in the Flybridge 60 to 70 feet category. They went on to developing and releasing models all the way up to 86’.

HCB Yachts’ building process allowed for customization at almost every design phase. These allowed customers to bring their vision alive and have a yacht that truly fit them and their boating style. Although HCB no longer manufactures new yachts, their used models are still coveted for their quality, comfort, and performance. 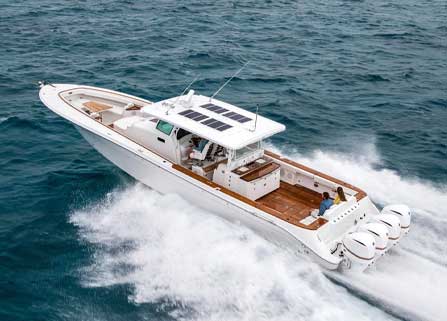