For 22 years, British-born Tony Fleming was the technical director and later the general manager of American Marine in Hong Kong and Singapore. American built the Grand Banks line of trawler yachts, which are still in production. After leaving American, Tony and business partner Anton Emmerton chose Tung Hwa in Taiwan as the birthplace of Fleming Yachts, where the first Fleming 55 was built in 1985.

By 1997, more than one hundred Fleming 55s had been manufactured. In 2000, the Fleming 75 was born of clients’ demands for a larger model, and in 2005, the Fleming 65 satisfied their wish for something in between. The first Fleming 65 produced, named Venture, was built for none other than Tony Fleming himself, and he gradually transitioned from boatbuilder to world traveler, videographer, and magazine publisher, leaving his company in the capable hands of a carefully assembled team of managers.

Fleming's daughter, Nicky, had helped her father handle daily operations after the death of Anton Emmerton, eventually becoming his director of marketing. Mechanical engineer Adrian Shard, Fleming’s nephew, had also joined the business to learn the fine art of boatbuilding from his uncle.

At the end of 2015, Fleming Yachts’ 30th year in business, the company completed and shipped its 300th boat. In 2017, Fleming launched the 78 Classic, which shares its deck and hull with the original 78 but sports a low-profile, single-level flybridge. Also, the flybridge hosts a barbecue grill, refrigerator, freezer, ice maker, and entertainment center. All electrical systems have been brought up to speed with the latest technology as well.

Fleming produces only four models; the Fleming 55, 58, 65, and 78. With a raised pilothouse and semi-displacement hull, the 55 is the classic trawler yacht. The deep keel protects the running gear and gives stability in following seas, and the Seatorque anti-vibration drive system has made her the industry standard for a smooth, quiet ride.

The Fleming 58 preserves the classic silhouette of the rest of the Fleming pack, though it was redesigned from scratch by Norman Wright and Sons of Brisbane. The 65 may measure only ten feet longer than the 55 but has much more deck and interior space because this yacht is 70% larger in displacement.

When the decision-makers at Fleming are debating whether to introduce a new feature on one of their models, they don't ask themselves if it will help them sell more boats. They propose instead, "Will it make the boat safer, better, or more convenient?" If the answer is yes, they throw the new element into the mix, and, in this way, their watercraft are continually evolving. 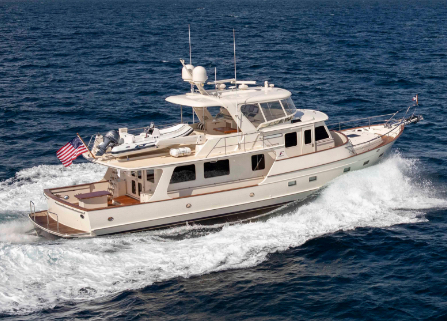