Jack Newington established Oundle Marina in 1963 when he bought several unused gravel pits close to a lake and the nearby River Nene, a 100-mile-long narrow but navigable waterway in the eastern part of England. Newington built workshops, offices, a marine slipway, and a chandlery store at Oundle, where he also rented small boats.

In 1967, Newington rolled out the Fairline 19, a fiberglass cruiser called the Deluxe, in response to requests for him to build a small yacht. Four years after that, Jack retired from the business. His son, Sam, a graduate of Columbia University’s MBA program and a former RAF pilot, commandeered the Fairline company. He added Mediterranean dealerships, introduced the Phantom line, and was the first British boatbuilder included on the European stock exchange.

In 1977, the company launched the Fairline 40, its flagship cruiser, which remained in production for eleven years. In 1981, the Turbo 36, one of the company’s most popular models, was launched. The years 1985 and 1991 saw the launch of the Targa and Squadron lines, respectively. In between, in 1986, Fairline received the Queen’s Award for Export Achievement, a notable accolade. By 1998, the Targa and Squadron lines were already well established and have been so popular that they’re still in production today.

None other than Prince Andrew, Duke of York, opened a new 60,000-square-foot factory in Oundle in 2001 to support export sales of Fairlines. Two years later, the company’s flagship yacht, the Squadron 74, was launched. In 2007, the Targa 38 and Squadron 68 won Motorboat of the Year in their respective categories from England’s IPC Marine Awards. The Targa 38 also won European Motorboat of the Year, the boatbuilding industry’s leading award, as another modern, 65,000-square-foot facility opened to increase production yet again.

In 2008, Fairline CEO Derek Carter visited Buckingham Palace to receive the Queen’s Award for Enterprise, most prestigious award for international trade from around the world. The 48 series launched in 2014 with the innovative design feature to include resin infusion technology, a monocoque deck construction, and a hull designed for IPS technology. Two years later, more innovations emerged from the company as Italian yacht designer Alberto Mancini and Dutch naval architectural firm Vripack signed on with Fairline, ushering in a new era in luxury yacht design and production. The Targa 63 GTO was the first yacht designed by Mancini for Fairline. This vessel won the award in the 2017 World Yachts Trophies competition for best exterior design.

It’s easy to see why the Targa 63 GTO has won awards. The large, rectangular windows let in plenty of natural light. This yacht configured for three or four staterooms or eight to ten berths and five bathrooms. With luxurious walnut finishes throughout, clients may choose among four colorways for textiles and create an elegant yacht to enjoy on the open water. 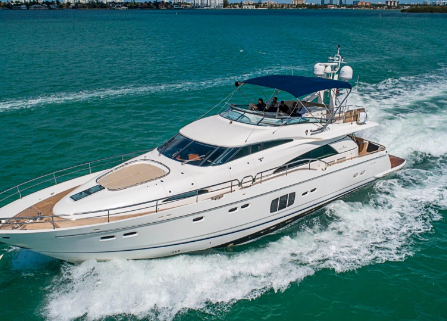