When he was just seventeen, naval architect, Arthur DeFever built his first boat, a wooden rowboat, which he rowed alone from his home in San Pedro, California to Catalina Island. He later designed movie sets at Universal Studios and developed custom built furniture for Hollywood actors before landing at San Pedro Boat Works, where he designed and built military vessels during World War II.

It wasn’t until the 1950s, though, that his foray into civilian boat design began. After relocating to San Diego, he started to design and build commercial tuna clippers for the city’s fleet, which had been depleted by the war.

In the 1960s, he built yachts at the prompting of friends in the Offshore Cruising Society. They urged him to design a long-range cruising boat seaworthy enough to run up and down the Pacific Coast. He designed cruisers that ranged in length from 38 to 54 feet for club members. Some of those wood and steel boats are still in service.

Like a lot of boatbuilders, DeFever switched to fiberglass as a hull material in the 1970s. He continued to improve his crafts' speed and durability in response to clients' demands, carefully honing hull designs and incorporating larger, more powerful engines. During his prestigious career, DeFever built more than 3,800 yachts, mostly in the 40- to 70-foot range, though he was sometimes commissioned to produce larger, more luxurious craft for his wealthier clientele. He once designed a 154-foot yacht for a German beer baron.

DeFever spent abundant time on Catalina Island and devoted himself to several yachting, conservation, and zoological organizations. He also raced sailboats in both national and international competitions. When he died in 2013 at the age of 94, he was still going to work every day and designing boats. Although DeFevers are no longer built, they're still in high demand by those who appreciate their reliability, no-frills comfort, and seaworthiness.

Regardless of size, most DeFever boats have full galleys with full-size refrigerators, ovens, generous indoor and outdoor living and eating areas, large staterooms with en-suite baths, extra berths for guests and plenty of storage including room for a washer and dryer.

Most DeFever enthusiasts, who tend to be reformed sailors, are content to take their time to get where they're going. They'll cruise at eight to ten knots and travel a thousand miles before they even have to think about refueling. They don't panic when a storm threatens because they own a stable boat that has the body of a trawler and the heart of a sailboat. They can travel with ease from Alaska to Panama along the West Coast, from Maine to the Bahamas along the East Coast, and to all other ports across the globe.

As any member of the DeFever Cruisers family will readily state, a DeFever is worth having—and worth celebrating. 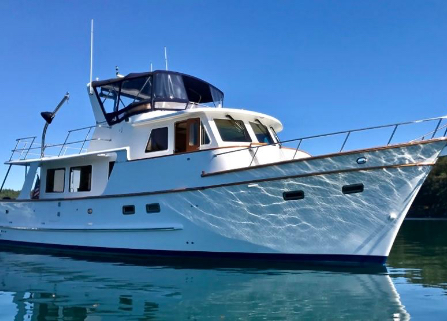