A flybridge boat has many advantages to traditional vessels such as the sport yacht. Flybridges have additional space that offer beautiful views. Most people think that flybridges are just for sport fisherman, but they are, in fact, very popular among leisure boating enthusiasts.

Getting in and out of marinas in the Cruisers 54 Flybridge yacht is no problem at all with joystick maneuverability and great 360 visibility with the raised control station. The visibility is excellent in this vessel all around, the cabin, which purports large windows and a forward windshield coming in at 5' 5" by 4' 8". This yacht has a length of 53' 7", a beam of 15' 6" and drafts only 49" ½” of water. This yacht has a fuel capacity of 500 gallons, a waste capacity of 72 gallons, and a fresh water capacity of 150 gallons. With a low top hamper, this flybridge model is sleeker than most.

Cruisers attention to even the smallest of detail on their 54 Flybridge is apparent from stern to bow; they have outdone themselves in this respect. When pulling up anchor, the anchor usually has some seaweed left on it, and it always is salty so, the full-forward anchor chamber comes complete with a built-in sprayer that washes the anchor while being pulled up. There are even foot controls to control the anchor to make raising the anchor a breeze.

Cruisers are also known for their spacious engine rooms. The one in the 54 Flybridge touts a 6’4” headspace and 2’ wide walking pathways. Everything is neat and organized and easily accessible.

The cockpit of the 54 Fly has all the accommodations people have come to expect from Cruisers. There is a wrap-around U-shaped large settee that has the option of being split into two, used for dinner, or just lounging on the deck. In front of the couch is an electric hi-lo table that can become part of the sofa and transform it into a sun lounge or raised for cocktails. In this way, the cockpit has immense versatility for all your needs.

The helm features a double-wide seat, top-tier controls, flip-up bolsters, armrests, digital throttles, a joystick, and lots of space. Unlike most boats, the windows of the Cruisers 54 Flybridge yacht are retractable and can let in the fresh air. The galley sits in between the entertainment area in the cockpit and the upper salon, placing it in the perfect position for the chef to continue being a part of the party. It has a wraparound counter, two sinks basins, a stove, lots of storage space, a dishwasher, and a microwave.

The lower salon comes complete with natural light from the windows of the hull, a retractable TV, and a sofa. Finally, the two staterooms feature exquisite extravagance. With large windows and queen-sized beds, these cabins have left nothing to be desired.

More amenities await the potential buyer of this vessel, as it is a proud accomplishment of the Cruisers line. 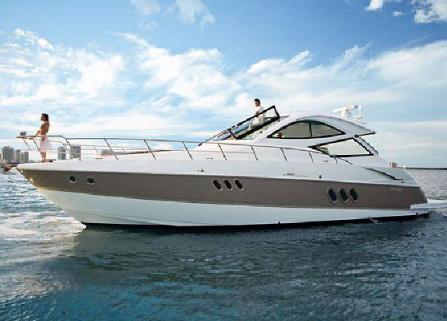