Sanzio Nicolini based his new business in the port city of Ancona, on the coast of the Adriatic Sea, and started building steel and aluminum boats when it was still fashionable to use wood as a naval building material.

By the end of the 1960s, he was building yachts in the 50- to 65-foot range, which were closely followed by the 75-foot SuperConero and increasingly larger and more luxurious models throughout the ensuing decades. Many of CRN’s clients were wealthy inhabitants of Greece and ruling families in the Middle East, and the CRN name became synonymous with a readily recognizable craft that had multiple levels and a distinctive, pointed bow.

In 1999, CRN joined the Ferretti Group, a leader in the design and construction of mega-yachts. Three years later, CRN acquired the shipyard adjacent to its facility in Ancona, Mario Morini, increasing CRN’s boatbuilding area to fifty square miles with a private marina. Since then, CRN has diversified its portfolio to include vessels with fiberglass hulls along with its traditional steel and aluminum ones. Semi-custom yachts are available in lengths from 95 to 295 feet.

Attention to detail is at the center of every CRN creation. Clients choose interior layouts and all furnishings, colors, and amenities. A look at some of CRN’s best-known vessels reveals both modern and traditional kitchen designs, sleek living spaces, and luxurious bedrooms and baths that are comparable to the world's top hotels. When money is no object, extras such as a swimming pool, waterfall, aquarium, spa, gym, elevator, cinema, hair salon, walk-in closets, wet bar, helipad, casino are all available. An iPad app using the Lutron system, controls the air conditioning, lights and window blinds.

CRN routinely partners with high-end designers on its interiors. Take Cloud 9, for example, this mega-yacht, built in 2017 is a collaboration among CRN, the architectural firm Zuccon International Project, and the interior design firm Winch Design.

The master suite encompasses an entire level and has a private deck. The main salon features soothing shades of navy blue, cream, and gold with a tray ceiling and custom-made columns. The spa includes a massage table, hair salon and fold-down balcony. Six guest suites are paneled in bleached oak, have elegant furnishings, and open onto a side deck and the sea.

White and black marble encases en-suite baths, and dark oak doors have engraved patterns. Multiple dining and lounging areas are scattered throughout the vessel to accommodate both formal and more laidback gatherings. Murals adorn many walls, and hand-carved motifs abound. Exotic woods and high-end finishes like Calacatta and Carrera marble have been finely honed, etched, and installed with precision.

If you don't fancy owning your mega-yacht—with its docking fees, full-time employees, and maintenance costs— CRN mega-yachts across the globe are available to charter. They come with a hefty price tag, though. Cloud 9 is $875,000 per week. 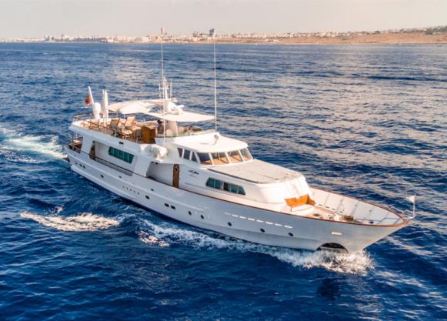