In 1870, Giovanni Cranchi started his boatbuilding business on the shores of Lake Como, fabricating fishing and cargo boats from wood. Nearly 150 years later, his descendants are still in the industry, though they craft leisure boats from fiberglass.

Currently, Cranchi comprises four production plants in various parts of Italy and produces eight different models, including the trawler, crossover, flybridge, hard top, cruiser, day cruiser, sports line, and outboard. Sizes range from 24 to 60 feet. There is a model to suit the needs of every mariner. The Cranchi designers are flexible and willing to amend any of their floor plans to accommodate a client's specific wishes.

Cranchi’s largest model, the 60 Fly, is a thoughtful mix of practicality and aesthetics. The designer threw in some extras that you might not think are important until you need them, such as extra water pumps to allow everyone onboard to take a hot shower and additional bilge pumps in case the primary pump fails. Volvo Penta engines ensure a cruising speed of 25 knots and a maximum speed of 34 knots. There are four lounging areas scattered across the deck and bridge, and a hydraulic swim platform that hides a launch. Several dining areas accommodate gatherings ranging from intimate family dinners to brunch for a crowd.

The helm features a variety of state-of-the-art navigation and vessel management systems. Glass panels set into the cockpit roof offer plenty of natural light. There’s a wet bar, grill, and refrigerator both in the cockpit and on the flybridge. The master berth has ample storage, and its en-suite bath features a multi-showerhead shower unit with a drench fitting. The galley comes with built-in cutting boards and storage canisters, double sinks, a dishwasher, and a cupboard that fits an espresso maker, cups, and saucers. This yacht even has a wine cellar.

For those with something sportier in mind, the Panama 24 fills the bill. This yacht carries up to eight passengers, and the outboard engines can supply up to 300 horsepower. Some of her features include hydraulic steering, two indoor berths, an enfolding windscreen on the dashboard, cockpit shower, separate bath, and swim ladder.

In between is the Z 35 Cruiser, which accommodates twelve passengers, features a large outdoor seating/entertainment area, and reaches speeds up to 32 knots. Her interior includes a queen-size master berth, guest berth with two single beds, bath with shower, and a kitchen with a large seating area that doubles as another bed.

Also in the mid-range is the E 52 F Evoluzione, whose tri-level design offers a striking silhouette on the waves. This yacht provides plenty of both indoor and outdoor seating above deck, as well as on the mid-deck. The berths are quite generous. 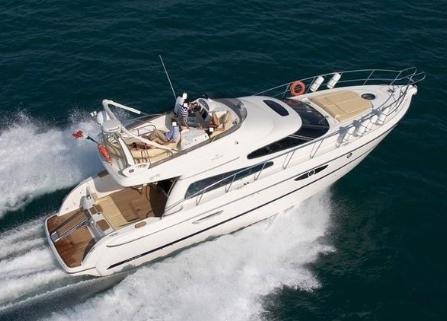