Lorenzo Benetti established the Benetti shipyard in 1873 and launched more than thirty wooden vessels in his first thirty years of business. At his death in 1914, his sons Gino and Emilio took over the company, renaming it Fratelli Benetti, or Benetti Brothers. By 1927, Gino and Emilio's sons had joined their fathers in the family business, and by 1935, the company had launched more than one hundred vessels including 21 schooners, three tartans, 63 brigantines, 12 navicelli (literally, cello ships), seven cutters, and six barkentines. With the launch of Maria in 1941, Benetti became a pioneer in producing steel-hulled diesel vessels, and in the 1960s, the company began building the first in a line of luxury mega-yachts.

Azimut Yachts bought Fratelli Benetti to form the Azimut Benetti Group in 1985, but that wasn’t the end of the company that had built a reputation for luxury and craftsmanship during the previous century. Azimut carried Benetti into the twenty-first century with technological advances and innovations that have kept the Benetti name at the forefront of the mega-yacht market.

Benetti specializes in yachts in the 95-foot to 295-foot range. Classes of vessels include Classic, Fast, and Oasis along with full custom Mega and Giga Yacht offerings. The smallest boat in the Classic line is the Delfino 95, which displaces 145 tons fully loaded and can travel 1,950 nautical miles at 10 knots. She can accommodate ten guests in five cabins along with five crew members in three crew cabins. The Diamond 145 is the largest vessel in this class. Her range is twice that of Delfino’s—3,800 nautical miles at 11 knots—and she can carry ten passengers and seven crew members.

The Fast class features two models, Fast 125 and Fast 140, both of which sport an Azipull Series Carbon C65 propulsion system designed by Rolls-Royce. Fast 125 also has a displacement-to-planing hull, combining the silence of a displacement hull with the performance of a planing hull. This hull increases cruising efficiency up to 30 percent and reduces slamming and pitching. Renowned design studio RWD offers three different designs from which to choose for the interior of each Fast yacht.

Benetti’s Yachtique Styling Lounge provides clients with one-stop shopping for their vessels’ interiors. Owners can choose and preview fabrics, furniture, and accessories from around the world via a 3D projection system. Every detail—from artwork and china patterns to bed linens and table lamps—is carefully chosen and integrated into each yacht’s overall design.

In addition to building and outfitting some of the world’s most beautiful boats, Benetti sponsors a yacht operation program called Dedicato, which offers clients a full suite of services including help with technical issues, maintenance, administration, insurance, and crew recruitment and hiring. 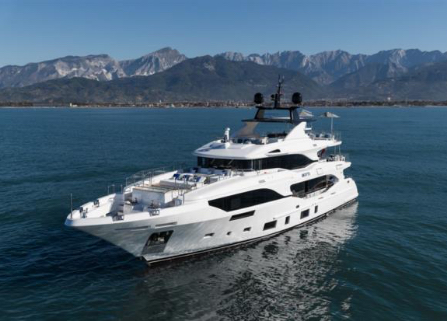