With over 100 years of know-how, Bénéteau is one of the largest and most experienced builders in the yacht industry. They are known for their many innovations including submersible swim platforms, Volvo IPS engines, and Air Step technology for increased speed with lowered energy consumption to name a few. Their own expertise in yacht building is combined with some of the best yacht design firms and naval architects in the business. From a small shipyard to several large factories, the company has come a long way.

A young shipwright named Benjamin Bénéteau built the first shipyard in 1884, initially designing sailing trawlers. World War I closed the shipyards for many years, but in 1928 Benjamin’s son André took over and enjoyed a very successful period until the early 1960’s. After which the business went into decline before being rejuvenated once again.

As the company recovered capital investment was used to modernize their factories. This allowed them to begin producing larger and more daring models. Unknowingly, this revised focus went as far as creating an entirely new market segment. The 1976 debut of their new model, named First, at the Paris Boat Show then skyrocketed them into the international market.

Today, Bénéteau builds the Gran Turismo, Swift Trawler, and Monte Carlo, models. Customers looking to travel long distances and have extended getaways may be interested in the Swift Trawler series, but if day trips or getting there more quickly is the way you boat then the Gran Turismo model may fit the bill. Realizing there are boaters that are looking for more, Bénéteau answers the demand with their Motoryacht line – Monte Carlo.

Bénéteau continues to innovate and expand its offerings, with a line-up that covers many market segments. The family still controls the company with majority ownership and hands-on direction. Working with some of the best design firms in the world, and incorporating new technologies as they are developed, the company is prepared for the future, while leveraging over 100 years of experience. 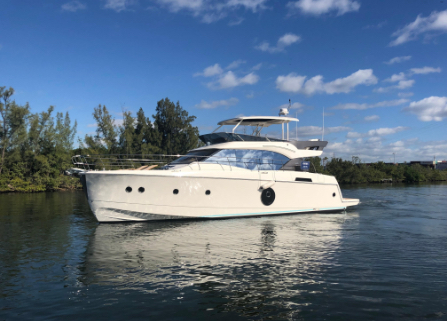