The principals at Tomco Marine Group have decades of collective experience in marine engineering, tooling, and fabrication. Tom Nelson started out as an apprentice in a boatyard, working his way up to president as he continually proved his knowledge and ability on the shop floor. He became the owner of Nelson Yacht Corporation, which built 70- to 90-foot custom yachts, as well as president of Nordic Tugs before founding Tomco Marine Group.

The company’s president, Alaska native Mike Schoppert, learned fiberglass lofting and tooling techniques early in his career at Uniflite Corporation. He later worked at Chris-Craft, Tolly Craft, and Oceanus, where he developed a tooling process and a facility to produce fiberglass components for Zodiac boats. Schoppert spent four years supervising the lamination department at Oceanus and was general manager at Nordic Tugs before he joined Tomco Marine Group.

Tomco’s vice president, Kurt Dilworth, worked at Chambers Craft from the late 1980s until the early 1990s, when the company restarted as Premier Boats. He eventually landed as a mechanic at Nordic Tugs, and as the company grew, so did his role. He became head engineer and developed a customer service position before joining Tomco Marine Group.

The American tug is not your grandfather's tugboat. Five models are in production, from the modest but beautiful 365 to the stunning 485, which has every comfort of home and is designed for mariners who want to venture a little farther from home port. In between are the 395, 435, and the Waypoint 36, which was introduced in 2018.

The 395 features sapele mahogany and maple cabinetry and veneers, a 7.3 cubic foot refrigerator/freezer and microwave, a cedar-lined hanging locker in the master bedroom, and screened portholes. The 485 ups the ante with a queen-size bed in the master, an in-house vacuum system, a 37-inch flat-screen TV and AM/FM/CD/DVD player, and a swim platform. She can travel more than 1,500 nautical miles on her 640-gallon fuel tank, and she also comes standard with a new Sidepower SEP thruster system. Her power plant is located in her large engine room, which has white surfaces and LED lights to make maintenance easier.

Designed around the 365’s hull and deck tooling, the Waypoint 36 is more affordable and rugged than the other offerings in the American Tug line, and her layout will accommodate more passengers. She’s the perfect choice for young or extended families. 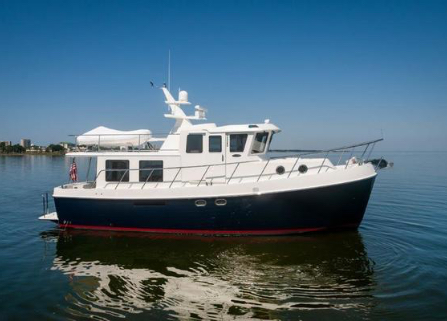